They beat my original quote by £2. Then I called Bennetts who gave me original renewal, said I was far from happy with increase, confirmed latest bike values and mileage and bingo.

My only gripe is after 9 years, your NCD stays at 9 years for some reason.

You lucky people living in an area classified as F*. MY area is “Refer” so I’ve got no hope of a good deal - although do have a garage.

But who is best for multi bike policies? I want to keep my old Bandit because it is light - which made commuting much more fun - but comparison sites don’t really cater for multi-bike needs.

I’m in a refer area and insured via Devitt, they recommended 3 separate policies as it works out cheaper than a multi one. 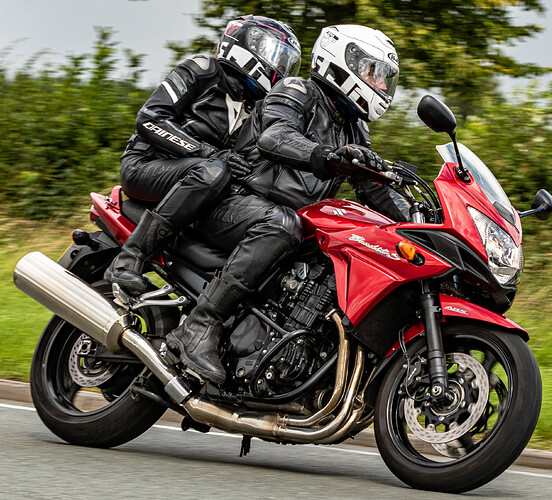 That’s no way to include your other half!

Thanks, Gavin. I just tried Devitt as you suggested and they are over £400 more expensive than BikeSure. They must just like your face - and not like mine.

MY area is “Refer”

Me too. Hastings Direct have been the cheapest by a long way for me. I went through Co Compare.

Thanks, mate. I was with Hastings Direct but I didn’t really get on with their “customer service” so I swore I’d never touch them again. I’d rather pay the extra and have more time to go out riding - and lower blood pressure. I wish you good luck in your dealings with them.

I know what you mean. I had the same experience with More>Than before - whom I refuse to deal with since. These cheap providers show their true colours when you need to claim, or amend.

I bet if I tried to reinsure now they wouldn’t be able to assist me, I know when I moved the previous insurer said they had pulled out of insuring anyone with a London postcode and it would be a new policy. I moved 1.7 miles…

Just had my renewal through from Devitt up from £290 to £309.
Had a run through a few comparison sites, same top three for all 3 sites, different prices on all three as well.
Carole Nash: TheBikeInsurer: £196, GoCompare: £182, CompareTheMarket: £239.

Sweet just looked at this! Moving from a “refer” North London to an A in Cumbria

Although tbf mines only £400 per year fully comp in North London, not garaged either

Well it’s that time of year for the service, MOT and insurance for the KTM.

Not quite the same as a renewal but I just traded in my Bonneville T100 Black (68 plate) for a new Street Triple RS. Called Bikesure to change over my policy and they said it’s over £200 to the end of my term. Asked them what the annual equivalent premium is for the Triple and they told me £750. For comparison the Bonnie was £180 fully comp.

After huffing and puffing and vowing to go elsewhere I found several annual quotes for the Triple at £500ish but that would mean sacrificing a year’s no claims as my current policy is due for renewal in a couple of months.

I think I’m being a sucker but a combination of the desire to up my no claims and being time poor (and lazy) saw me pony up the £200-odd to see me to the end of my term with Bikesure. Assuming I don’t crash the Triple in the mean time that gives me another year no claims that will hopefully land me a sub-£500 fully comp on the triple. I wont be going back to Bikesure though, the cheeky gets.

It’s more likely a way to price out high risk business when there’s a change on the policy.

Agreed. While I wouldn’t like to think of myself as “high risk”, the truth is I probably am, and the new bike is riskier from a “will it get nicked?” perspective as well as from a “will he be a dickhead and crash it?” Perspective.