My Tale of Summer ride into Europe and North Africa

Back in April, I asked on this forum what I should take or do prior and during a long trip into Europe and beyond (What to take on a long trip). I received a lot of great hints and I did apply many of them. I thought I’d share my own findings after returning from a 4-month trip covering 6 countries in Europe and North Africa. This is a personal account/story, and not about Dos and Don’ts.

1- A 650CC bike was just fine. I didn’t miss a ferry, or a train, or a party, never felt imbalanced or too lightweight (Probably because I am heavy myself). I was told I needed a bigger bike but I could not reach the limit of the 650CC. Never heated up, or choked, or reached its max speed. In fact, the “smaller” size was handy in many instances.

2- I mounted 2 side containers/tubes and put 2 spare fuel bottles inside. While I did not get to use their content, they gave me the confidence to ride longer before having to fill up.

3- Quickly I realised that I had to replan my trip around fuel stations. 100 to 150 miles are very short distances on long rides. And not all fuel stations are open 24/7. As such, I had to remain close to motorways when riding at night

4- Riding at night is a LOT less fun than during the day, especially on dark roads.

5- There are 2 muscles that long and repetitive rides will put under stress: The neck and the abductors. The first is when the wind is pushing strong against the helmet for a long while, and the 2nd to squeeze against the fuel tank for better control and to reduce pressure on wrists.

6- In fact, you should be reasonably fit for long rides. Thankfully I was.

7- It was a good idea to carry a spare open helmet for in-city travel, especially in summer. Same with taking summer and winter gloves.

8- Heated grips are just awesome. I hit cold moments while going through the Swiss and North Italian mountains. I did not have to wear my heater inner jacket because once my hands were warm the whole body was fine.

9- It was a challenge to pull cash and bank card from and into the jacket when paying for tolls. A few times I had to take one glove off and then struggle to put it back.

10- A compression short is a great added comfort under the pants, in all weathers.

11- The amount of sweat while riding is insane, even in cold weather. I bought a hydration pack but did not use it because I wanted to have nothing on my back. Every fuel refill was combined with visiting the WC and then drinking at least ½ litre of water.

12- My bike was quite loaded, and I learnt that balancing the bike is not an easy thing. I concluded that the weight on the left side should be a bit higher than that on the right side, but not by too much. The reason is that a heavy bike tends to want to fall quicker on slightly imbalanced surfaces or in windy weather and so the side stand needs a bit of support.

13- It is easy to think you’d check your bike regularly during the trip, but it quickly becomes a cumbersome act. I am glad I did full service before taking off.

14- I was warned about the pain of continuous noise when riding for hours. Didn’t bother me or leave any resonance afterwards.

15- Using Scottoiler was a good idea. The chain remained lubed all the time and I only had to top up once. No drips on floors either.

16- I once noticed that my handlebar becomes too responsive. 10 miles later, I stopped and checked and found out I had a flat tyre. I continued riding until I reached a mechanic who fixed the puncture and it has been more than 3 months with no side effects. Tyres technologies have truly evolved from the last puncture I had more than 10 years ago. I have Michelin tyres.

17- It was handy to take a bike cover with me. Many humid places out there and not always an overnight shelter for the bike. Same with the USB adapter I installed. The phone was my map all the time and never used the power bank I took with me

18- I took with me 3 locks: a tough alarmed disc lock, an alarmed chain, and a non-alarmed long chain.

19- I am using Biketrac and thought they covered only the UK. They actually covered me in Europe and in Africa. How did I know that? They simultaneously text, emailed, App-alerted, and called me when Eurotunnel and the ferry started moving.

20- I did add an Apple AirTag for good measure and to allow the family to check on the bike and on me (I had an AirTag on me too).

21- For this trip, I bought a leather jacket for the first time in 20+ years. I was missing on something great for a very long time.

22- I bought a D3O as a back pad for the jacket and it is remarkably soft and comfortable. Thankfully I never had to test it

23- Proper screen cleaning product is a must, and should be handy. In some places, the helmet visor was getting hammered by bugs.

24- I did not buy Bluetooth coms for the helmet mainly due to time and budget constraints. Well, I did not need it either.

25- When I went into Eurotunnel, I put a bright orange tape on the right-side mirror’s arm, and also near the right-side handle. They served to remind me which side of the road I should be on. Upon returning to the UK, I did the same on the left side until I regathered my reflexes. Believe me, I did have to look at them a few times to remember where I should be.

26- On a Belgian motorway, I was stopped by a car driver who then fixed my number plate that was dangling, including putting in a new bolt. Awesome.

27- Bikers in different countries have different ways to greet each other. Tilting the head sideways, pulling the left hand down, kicking your foot in the air… I just kept getting it wrong.

28- In fact, I had ZERO issues with people over 4 months of travel into 2 continents and totally different cultures and laws. People have been just awesome, including police and border security. I am not saying people are great despite what you see on media. I am saying maybe I am a global celebrity without knowing it.

Man it sounds like you had a great time.

So where did you go, what did you see, who did you meet?

So where did you go, what did you see

Yes I second this question.

Good ideal to mark which side of the road you should be riding on. If there is no traffic you can easily default to the wrong side. Sounds like a great trip. 650 seems like more than enough power for touring.

It was a challenge to pull cash and bank card from and into the jacket when paying for tolls.

Yeah this is a faff, especially in the cold weather when you are rushing to get moving again and forget to button down something or other.

I wonder with modern contactless cards could you simply put a card in back of one of your gloves? The card reader should be able to pick it up through the thickness of a glove.

You can get a Toll tag before you travel. 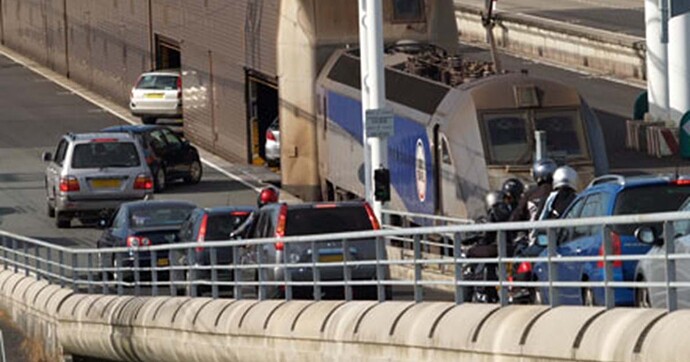 Austrian and Swiss vignettes are also required if riding on the autobahns in country. Some Lbrs might have opted to chance it, but I couldn’t comment

So what did you ride in the end?