Hey all. Not been on here the past couple of weeks… Started my new job and I’m getting viciously buggered with stuff to do.

I hope everybody is alive and well

So, I’ve been involved in a bit of a weird little situation involving my driving licence.

I got stopped for speeding on the 1st July. The Policeman gave me a little paper booklet thing and told me I had to go to my local police station within 7 days, surrender my licence and present the little booklet.

So the next day I went to Hounslow police station with my photo card and paper counterpart. I gave them to a bloke - I don’t think he was a copper, rather an admin worker employed by the Met.

Anyway, after I handed in my licence the chap said that the little penalty booklet would act as my licence, or explain my lack of a licence if I ever had to show it to anyone.

A few weeks later I got a letter, it had a new photocard almost identical to my old one, and my paper counterpart was also there but with some writing on it written in biro. Was difficult to read I just assumed it said what the points were etc…

So things were all fine for a while… But then I had a note through in the mail from TFL, that said they had some lost property belonging to me. I thought ‘oh this is strange, I don’t think I’ve lost anything lately but I’ll call them anyway to find out what it is’ etc. So I called the TFL lost property office and they told me that they had my driving licence photo card - reportedly found on a bus in Hounslow.

After that I went to Hounslow nick, spoke to a different guy (admin staff member agin I believe) and I explained the situation. He said that the licences get put into a deposit bag, put in a safe, then something like it gets collected and goes to DVLA to be dealt with and that they get destroyed, something like that. He told me it was most likely that I had some identity theft, gave me a leaflet about fraud and said I should report it and go collect the licence, he said it would probably have a picture of someone else on it.

The next step… Around 10 days ago I went to the TFL lost property office, paid them £4 quid and they gave me my ‘lost item’. The licence they gave me was my old photocard. The exact one. My picture, my name and address, all the numbers were identical - I have photocopies of the card and I studied it, everything was all kosher.

So… Couple days back I went back to Hounslow cop shop and spoke to a constable who told me I need to bring the old photocard in and give it her so she can do some further investigation. I had it with me but didn’t want to hand it over… The officer said my licence must have made if to the DVLA because if they had not have received it, I would have received a court summons.

It all seems a little strange… Hounslow police station, found in Hounslow on a bus, hand writing on my paper part as opposed to print…

I’m not sure what to do really. I think I’ll write to the IPCC and the DVLA to try and find out what’s been going on…

Anyone got any ideas or advice? If you’ve had points have you had a new photocard issued? And the paper counterpart, is that printed on or written by hand when you get points?

Any discussion very much appreciated…

I’ve only ever had endorsements mechanically printed on my licence when first issued by DVLA, see the top two lines below. Your license would not have gone to DVLA but to the Court in the area where you were issued with the FPN. The Court will then record the endorsement in hand writing, sometimes making use of rubber stamps, your paperwork.

Hand written endorsements are the norm, your paperwork will be a little different but the principal of recording the details remains the same. here’s my current collection some of the hand writing is poor but its all readable, unlike my Doctor’s. 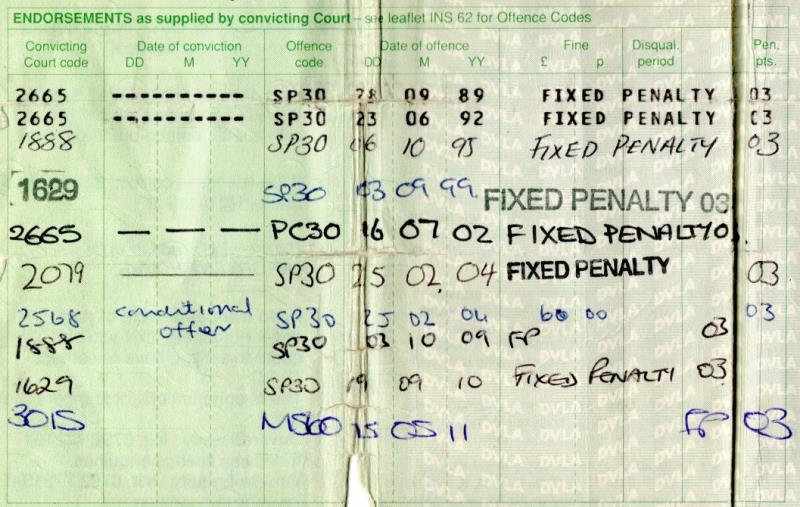 I can only assume the Court lost the card after the endorsement was made and applied to DVLA on your behalf for a new card, hence a new card along with the old paperwork.

Jesus Art, are you trying to get them to fill that thing up???

Conrad, personally I would forget it. The only odd thing is the new plastic license - but I don’t think that is a big deal…

Note to Self - if riding with Art mke sure he leads.

Sounds to me that someone in the police or the DVLA lost your licence while travelling home, were embarrased to admit it and replaced it on the qt.

I never hand in my licence , tell em I lost it even if it’s in my wallet . Make em send me a new one … Hence why I have spare licences … for people who forget at Santa Pod :hehe:

^^^LOL i wouldnt expect anything less from you NumNum :laugh:

Conrad thats a bit of an odd one to say the least :blink:

but i agree with eezy, i think some numpty officer left it in the bus and then tried to blag about identity theft to cover their asses.

i’d do nothing too, by the look of things you may have been very lucky there

I picked up 3 points 18 months ago (my first in 20 years)
As soon as i was caught, I applied for replacement copies and I handed in my current one to the nick. A few days later I received my nice new, shiny and clean licence from dvla.
A few days after that, I received another letter from them saying the one they had received (to add the points to) wasnt the latest version and they wanted the newer one.
When I finally sorted everything out and got it back, the paper part had the hand written offence of SP60. All good as that was my offence.
When I sent it away again 6 months later (hgv medical), it came back typed with SP30!
Apparently SP60 is no longer a valid code.

Yes I suppose I made a bit of a mountain of a mole hill… But still it’s a bit disconcerting, having given my licence to the police only for it to be found on a bus.

The licence has my photo, full name, address etc etc… It says I have a motorcycle licence so you could assume that there would be a motorcycle kept at my address. You could google my full name to see where I work, the hours when I’m at work, away from my house. You get my point…

Take 5 minutes to write a letter and stick a stamp on it, if only to cover yourself if something nefarious has gone on.

This is a major breach of data protection.

You should report it to the Information Commissioner. http://www.ico.org.uk/

You have to ask yourself the question, what was your single driving licence identification doing on a bus, carried in such a way that it could be left on the bus?

It puts in mind the idea that either, yours was not the only driving licence lost, instead several driving licences were lost but you are only aware of your own driving licence, or something a little more sinister, that your driving licence was not being moved legitimately and had actually been stolen and removed by a member of staff, who then lost it on the bus going home.

Either way, there should be an investigation to see how this happened and to ensure that it cannot happen again.

This is a major breach of data protection.

You should report it to the Information Commissioner. http://www.ico.org.uk/

You have to ask yourself the question, what was your single driving licence identification doing on a bus, carried in such a way that it could be left on the bus?

It puts in mind the idea that either, yours was not the only driving licence lost, instead several driving licences were lost but you are only aware of your own driving licence, or something a little more sinister, that your driving licence was not being moved legitimately and had actually been stolen and removed by a member of staff, who then lost it on the bus going home.

Either way, there should be an investigation to see how this happened and to ensure that it cannot happen again.

I’m in this camp as data protection is so big nowadays, you could even write to the police commissioner and complain.

Like Kaos says, your licence should never have been carried in this way on the bus. For all you know, a worker at the police station has a nice little earner on the side in stolen documents.

I’d raise a formal complaint with the IPCC and with the Information Commissioner. I’d also be tempted to give the local rag a bell as I’m sure they’d only be too happy to have a little story like that handed to them to fill up the space between the adverts… bring some pressure to bear on them

So long as the paper work is all in order, fine paid, and you have your licence
then no need to do anything.

However, I always take potocopies of my licence and associated documents
especially before handing anything over.

This has worked very well for me twice…

Someone is on the make.

It is quite conceivable that there is someone at the DVLA who ‘recycles’ driving licences. It makes sense that the licence reappeared in Hounslow because if someone wanted to sell a dodgy licence with a Hounslow address of course they’d sell it in Hounslow…

Cheers Kaos, will do as advised and see what happens…