After abit of work my boy is now loving the water, so much so as soon as he comes in off a walk he goes running to the pool.

Here is his first time actualy in the water 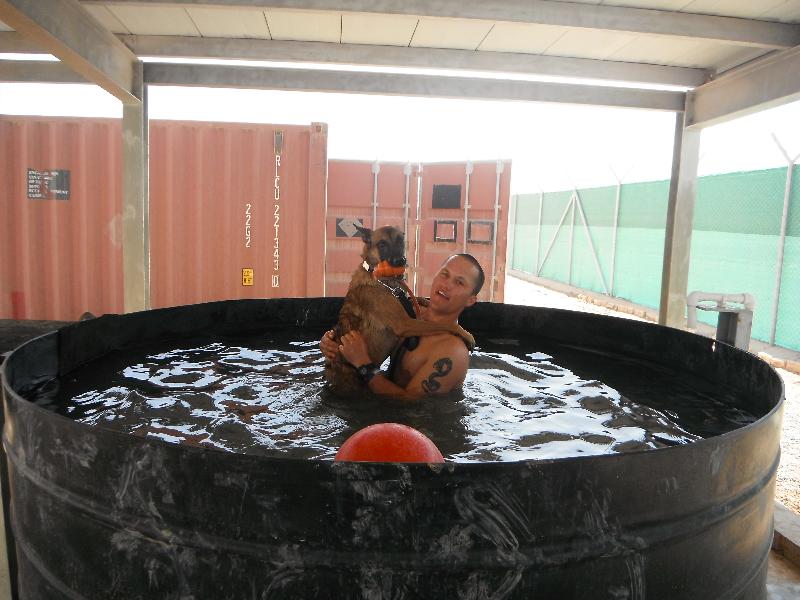 neat tattoo your boy has. What’s that in your mouth?

Sooo cute! I don’t really like dogs too much (I’m a cat Mama) but that pic is super cute

Umm he looks for things alot bigger than a grenade :w00t:

It’s the puppy!!! (Oh, he has a Kong toy. Damn.) Glad he finally got in the pool, maybe now he realises that being in the pool feels much nicer than being out in the sand and heat?

Nice pic ASBO - stay safe please both of you.

Ooh, check you FBB for knowing what it is

Cheers Hels, he’ll be the one keeping me safe

He was going skitz in the pool but when i let him hold onto me he calmed down. Tellin ya he is like having a child to look after, a cheeky one at that. He can be very testing at times and try see what he can get away with, lol. Sneaky too, you tell him off for chewing his chain then he does it again everytime you look away.

Awww, what a cutie! Glad he’s a Shepherd:)

What’s he like at opening parcels? He should have one soon:kiss:

Awww, what a cutie! Glad he’s a Shepherd:)

What’s he like at opening parcels? He should have one soon:kiss:

I was just about to say he is not a Shepherd but thats a lie, he aint a german shepherd though.

And well as for opening parcels, he goes through my bag well enough, lol