Chance to make something a little special, fit an RR engine. One of 500 made.

Wow! That was lucky, definitley good job you didn’t get hurt!

If you scrap the engine let me know what you’re offered as I might be interested just as a project to teach lil man about engines, might even repair/try and cast a new casing, every man cave needs a foundry right….

If I was you I’d ship it off to Copart click on the ‘Sell a vehicle’ tab and select ‘we will buy your vehicle’ or ‘sell your vehicle at auction’.

You do not have the skill sets required or deep enough pockets for the rebuild or fettling required if obtaining a donor motorcycle/engine. Unfortunately your insurance will not cover the loss here so get back what you can from selling it. It should prove a popular lot at auction because its an engine failure loss, there are many folk out there with the other side of the coin, a collision write off and the skills to marry the two.

Damn Martin, glad to hear that wasn’t any worse as that could have been nasty on the M25! No help on the bike, only suggestion is replacement engine if economical and you intend to keep it for a few more years. Otherwise strip it down, sell some of the road parts and turn it into a track toy.

Deo Gloria. I’d say your angel was on full duty that day! An engine swap is my opinion, metal bits floating around in there and who knows what else went pop.

M25 is no place to have an engine failure like that and glad it was just a breakdown and recovery. 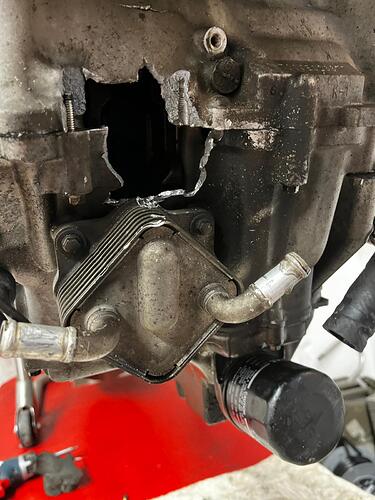 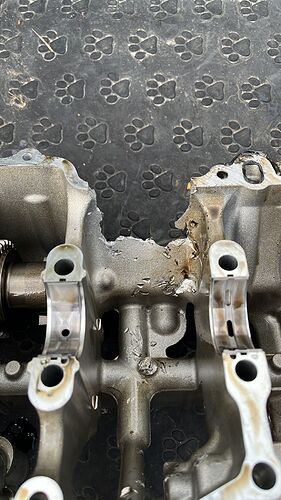 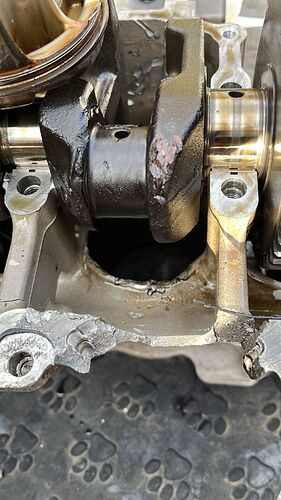 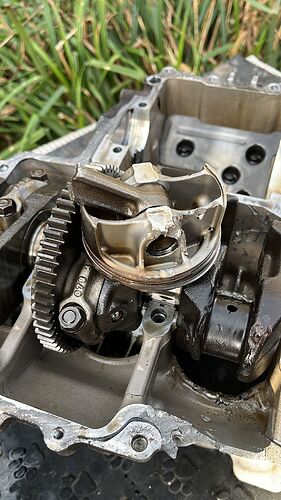 There was no oil leak that I noticed. Although I wasn’t looking for one, I would have noticed oil drops in my garage, and I was very good at keeping it clean.

There was no oil warning light prior to the failure.

There was a small drop in power about 2 or 3 minutes before it blew. I though it was the lining of my electrically heated gloves that had slipped. The engine didn’t seize, I managed to ride it another 2 miles or so and got off the M25.

It was last service in May and had done 6200 miles since then. The service intervals for it are 4000 miles, which I was not aware of, so probably my fault.

A modern engine should be able to cope with 2000 miles extra without terminal failure I’d say. Unless you were like on the limiter all the time.

I suspect 2-3 mins before, you had a major component failure like a bung from an oil passageway gave out. All the oil left the engine at once and even that short amount of time without oil, at 3-5000rpm cruising would do a lot of damage. Easy to ride 2-3 mins and not look at the dash and see an oil warning light. In hindsight, if you retraced your steps that day you’d have found a big stripe of oil up the road.

There was no oil warning light. I looked at my helmet camera footage. I only occasionally hit the rev limiter. This is how I know it could do 105mph in first gear (and that validates me having an IQ of only 8).

There is a reason why race teams rebuild engines every three race meets or so.

Modern race engines are sealed at the beginning of the season to stop fettling. MotoGP teams only get 3 engines per rider to last all season, IIRC.

Yes, that’s more or less where I was. Race team engines do very little in the way of mileage and are replaced every couple of race meets. I think how it works is the old engines are returned, rebuilt and resealed.

From that crank surface it looks like the bottom of the conrod gave way. Same as happened on my zx9, the conrod clamp came off and the rod flailed around in the crankcase

I’m 100% certain this has nothing to do with neglected engine oil levels, proven by the oil covered crankshaft main journals etc.

In a rare situation, I agree completely.

Occasionally hitting the rev limiter is fine, it’s there so you don’t go faster and do damage, its at the top of the design spec.

You increase wear doing it, but its not going to directly cause damage 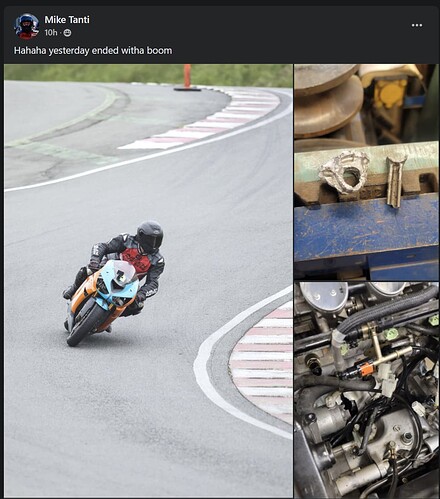