Riding along the M25 on Sunday, I felt a drop in power, and initially thought that a spark plug failed. A minute or so later, there was a further massive drop in power, and awful dull noise from the engine and a lot of smoke behind me. As I was close to my exit at J25, and there not being a hard shoulder there, I got the bike of the motorway, pulled up and called recovery. This was on my birthday.

The following day, I looked and found a big hole on the front of the engine block and can see into engine.

I now left considering my options. Do I get the engine rebuilt? Do I buy a second hand engine? Do I sell the bike as it is 2016 Gen 5 ZX-10R Ninja with 23k miles and full service history?

I just about to go to a Bacon’s aka East London Kawasaki, where I’ve had the bike fully serviced since I bought it. I’ll ask then if there are known issues with this model, and if so, if Kawasaki are prepared to supply parts for its rebuild.

What are your thoughts guys?

I’m looking at this from the “glass half full” point of view. The amount of oil on the back tyre was shocking. I didn’t have any scary moments. This was a breakdown and not an accident. 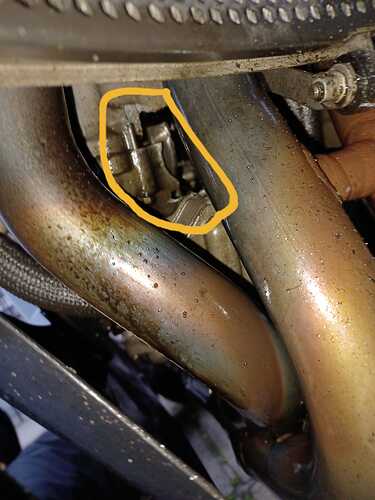 That is a hardcore breakdown! odd that it blew like that unless you were ringing it’s neck all the way.

When was the last time it was serviced? any coloration there?

in terms of fix, well beyond my skill set so i’ll let the @me_groovy of LB offer up on that one.

All depends on how deep your pockets are to get it fixed.
If you get a 2nd hand engine, there’s not guarantee it’ll be a good one or not.
You could repair, but you wont know what needs replacing till you take everything apart.

As for selling it, having a full service history will mean nothing with a engine with a hole in it.

Holy fucking shit! This is almost the same thing that happened with my 1995 ZX9. The bottom end bearings on them were known for being weak, the conrod on mine let go and punched a hole into the engine casing.

Anyway, back to your bike. What you want to do is get another engine. There’s no way in hell it makes financial sense to repair that in comparison. Also bear in mind that where that hole is, bits of metal are missing. They could be inside the engine and could be all the way back in the gearbox, you will never know for sure so so err on the safe side.

After that, flag your engine as scrap. A breaker would want some of the parts on it for sure, won’t be hard to sell.

Internet searches suggest there were recalls in the US and Australia linked to transmission failures. Not sure if it applied to UK models. Is it a UK bike or an import?

With so few miles, relatively new bike and full service history I wonder if contacting Kawasaki directly would be in order to lodge a complaint and see if they’ll cover some of the costs. Even if it’s out of warranty, they might be willing to do something as a goodwill gesture.

Chance to make something a little special, fit an RR engine. One of 500 made.

Wow! That was lucky, definitley good job you didn’t get hurt!

If you scrap the engine let me know what you’re offered as I might be interested just as a project to teach lil man about engines, might even repair/try and cast a new casing, every man cave needs a foundry right….

If I was you I’d ship it off to Copart click on the ‘Sell a vehicle’ tab and select ‘we will buy your vehicle’ or ‘sell your vehicle at auction’.

You do not have the skill sets required or deep enough pockets for the rebuild or fettling required if obtaining a donor motorcycle/engine. Unfortunately your insurance will not cover the loss here so get back what you can from selling it. It should prove a popular lot at auction because its an engine failure loss, there are many folk out there with the other side of the coin, a collision write off and the skills to marry the two.

Damn Martin, glad to hear that wasn’t any worse as that could have been nasty on the M25! No help on the bike, only suggestion is replacement engine if economical and you intend to keep it for a few more years. Otherwise strip it down, sell some of the road parts and turn it into a track toy.

Deo Gloria. I’d say your angel was on full duty that day! An engine swap is my opinion, metal bits floating around in there and who knows what else went pop.

M25 is no place to have an engine failure like that and glad it was just a breakdown and recovery.