Movie format for helm cams... which is better

I have a question in regards to the helm cams. I would like to know which format would be better for daily commuting, number plate catching and general touch wood incidents.

I have two options: 720p at 60fps or 1080p at 30fps. Size for file would be the same so it is just a matter of which is better in case of catching an incident on the camera or grabbing a number plate from someone doing something very very dodgy.

i would say 720p at 60fps as you get better slowmo for reading the number plates due to the higher FPS.

But then, if you need to zoom in on a plate which is more distant when it becomes visible, 1080p will give you more ability to do so due to the higher resolution.

Whivh helmet cam are you going for?

ContourHD only reason I got the older model was because it had separate battery not built in and it can do 60fps.

I will test it out and see the difference… weather sucks now so really not looking forward to ride home:(

i would say 720p at 60fps as you get better slowmo for reading the number plates due to the higher FPS.

My contour only goes up to 720p and not had a problem with reading number plates. In fact, that was what made me buy it.

With the contour HD, you only get the wider angle shots in 720p

By the way I managed to fit the camera INSIDE the helmet:)) so I don’t bother with waterproof cover for it. I may do a YouTube video on how I did it for others to get ideas.

Andrei: “By the way I managed to fit the camera INSIDE the helmet

Hope it is safe…

What I did was get a replacement cheek pad for my Arai then draw the outline of my camera on it and cut it out with a knife. What I have is a slot to place my camera in, fits like a glove. Not sure how safe it is but the helmet shell is still proetcting my head. If I really bang my head that hard to my left the camera may brake my cheek bone but if the hit is that bad I doubt my cheek bone is what I should be worry about anyhow.

I will get some pictures and put them up, if you have the new camera which is smaller or one of the pen or bullet cams this would work even better.

Why not slice the top off the helmet altogether and mount a tripod base plate… who needs the protection the helmet comes with, it only gets in the way… :doze:

Here are some pics.

Old one is the shitty KeyChain camera… very unreliable:( but I did like the date and time stamp. 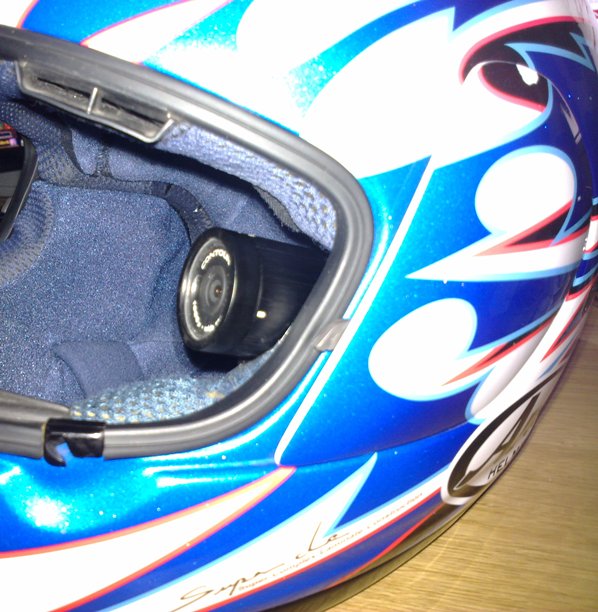 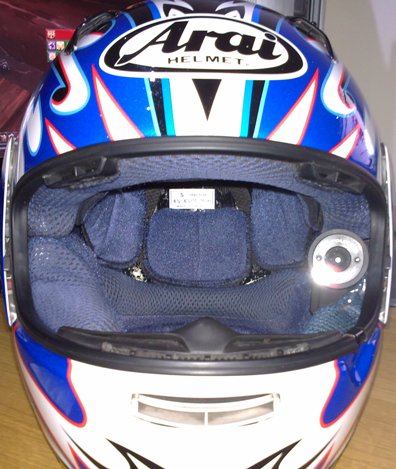 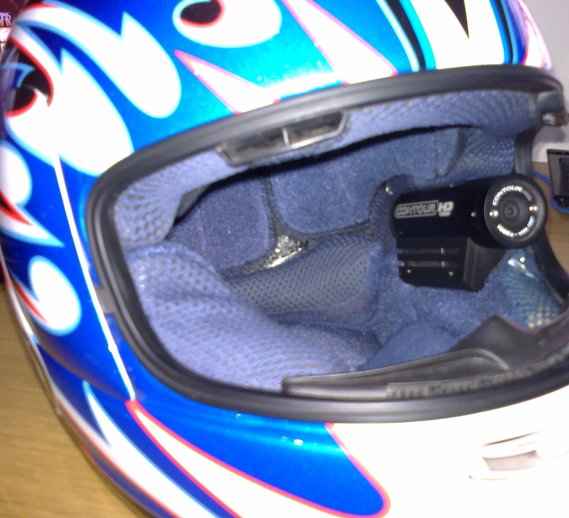 i have a contour hd i used to run at 1080p looked amazeing and the old nokia battreys work i found 4 in my old phone box and bought a cheap one off ebay for £1,XD now i run 720 as the battreys last longer and u have a wider field of view =]

wow and I just paid £20 for a battery from Amazon yesterday. Dopy. Maybe I can cancel the buy.

Which Nokia battery is that as I have quite a few lyinga round… will the N8 one N86 ones do?

UPDATE: I tried smacking my head around and hitting hard from the left side… and I didn’t feel anything different that my right side. I believe it is safe as the structure of the shell is intact and the camera goes in a fitted spot so even the integrity of the padding is OK as the camera keep it the same. Pretty much like taking a nail out and plugging the hole.

Okay that is definitely not safe.

I see you’ve bought the nice blue Arai to match your leathers, but with a camera stuck in it like that it’s pretty much useless…

I suggest you mount it on the outside of the helmet (for your own sake not mine). Torrential downpours have not done any damage to my camera…

Hope it is safe…

Not sure how safe it is but the helmet shell is still proetcting my head. If I really bang my head that hard to my left the camera may brake my cheek bone but if the hit is that bad I doubt my cheek bone is what I should be worry about anyhow.

You have to be fu**ing mental to do that. Not only have you compromised the lid’s protective qualities you have also most probably voided any waranty you did have.

Why not mount it to your bike. If you need to just change the lens to capture more of the road.

If that camera smashes then you’ll have glass from the lens inside the visor…doesn’t bear thinking about. :crazy: or a big indent in the side of your face!

Get either one for your arm or mount it on the bike as Daniel said.