Not sure it’s a ‘Classic’, but as my Moriwaki 750 is 30 years old next year i’m sure this is as good a place as any to mention my winter rebuild.I’ve owned the bike from new and has slowly evolved into its present form over the years. Usual '80’s mods…braced swinging arm and frame…Harris Works exhaust plus some mild engine tuning with cams and porting. Then various paint schemes until i finally arrived at the ‘Moriwaki’ inspired livery.

However it’s been off the road a couple of years due to damaged fork seals and tubes needing to be rechromed. Having other bikes has meant this work’s been on the back burner…until now. Apart from the fork service, most thats required to be done is cosmetic, some paint and dull ally. But this time i’m also carrying out some more modifications. So i’ll be replacing all nuts and bolts with stainless steel, removing all unused brackets from frame which i’ll then repaint. Engine out to be checked, then cleaned…same for carbs. Renthal bars to replace bling bling gold ones and mini-indicators in place of large chrome items.

I also plan to remove original clocks and, in their place, fit a LCD dash, with digital speed and rev counter.

Work has started on the paint on plastics and tank. I’ll then strip forks ready to go for re-chrome after the holidays. Then engine out, brakes checked, carbs sorted and anything else that needs doing. Hope to be back up and running in the spring and i’ll post up progress reports along the way…watch this space.

OMG! you just shot me back to my teen years, so looking forward to some more pix etc.

That’s deffo a classic,and a very nice one to.

Lovely bike. Great to see your its only owner!

Please keep all the original bits though! My dad has spent years hunting bits for his Vincent…if only his Dad kept all the bits!!

Lovely bike. Great to see your its only owner!

Please keep all the original bits though! My dad has spent years hunting bits for his Vincent…if only his Dad kept all the bits!!

Have all the original parts, suspension, seat, mud guard etc, apart from the exhaust. Plus the parts i’m changing this time around.

that looks tidy to me already.

Has now gone from this…

Removed the engine today prior to breaking the rolling chassis down and stripping forks for rechrome. Before then i’ll work out where to mount the rear indicators etc. The bike will then be disassembled for frame mods and paint.

The engine is now on the bench (forgot how heavy it is !) ready for cleaning, service and paint. But that will happen later.

So, it’s a start with plenty to do while the forks are away.

Nice work, hats off for keeping it that long!

I’d be tempted to get late forks brakes and 17inch wheels in it, seen a few LC350’s like that and they look phat…

And a sharp one too… Boy that takes me back to the old slabside styling, jeeper mag wheels, square everything … beauty!

That was one cool looking bike…

Due to many factors, progress up 'til now has been, erm, slow !

But things are back on track!! The frame was stripped back to metal, revealing frame number and ‘Made in Japan’, various unwanted brackets removed, before being repainted black. Now in the workshop the rebuild is underway. Fork lowers were repainted and rebushed. Rechomed tubes fitted along with new oil seals. Then onto the brakes.Callipers all stripped, cleaned, painted and fitted with new oil and dust seals.

I have decided that i don’t like the polished heads on the stainless bolts.

Going for a more ‘racer’ look rather than ‘bling’ custom. So i’m giving them all a going over with a scouring pad.
Front end is now sorted and need to start thinking about mounting brackets for new dash…yes that’s all it is, the empty holes will take lights for indicators, high beam etc. 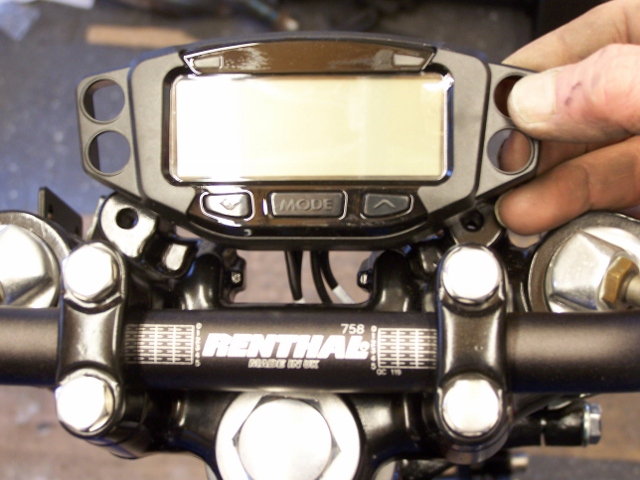 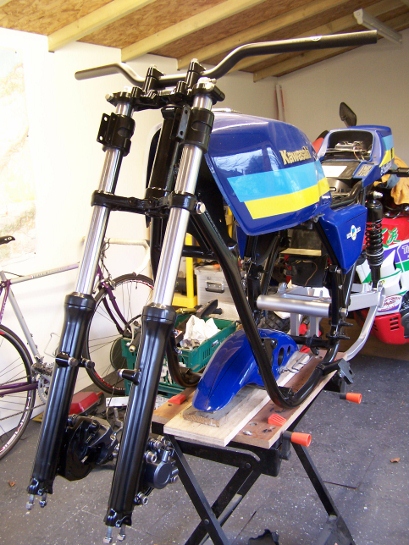 album_pic.php?pic_id=11134409×545
Thought i’d better take it down off the stand before the frame became too heavy. Have just ordered c/s kit and new disc’s for the front end. Still 1001 little jobs to do…cleaning, painting and fabricating…but heading in the right direction.

With another box of goodies arriving from Z-Power i’m starting to get things buttoned down so chassis should be back to it’s former glory in no time…subject to work etc.:w00t: 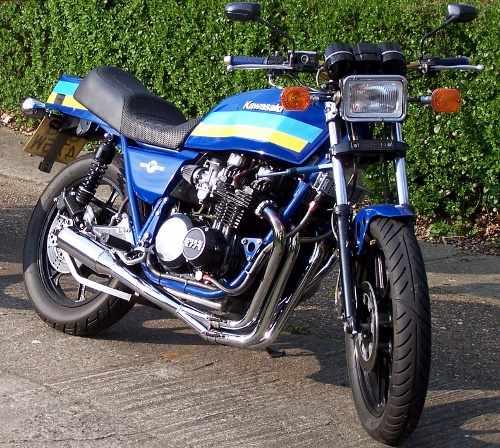 You do it all yourself?

Also, is that an Acewell speedo? Looking for something similar for my 'Blade fighter…

Cheers. Apart from rechroming the fork tubes, i do all the mechanical and cosmetic work myself. Probably why things grind to a halt when other work takes priority. The dash is from Trail Tech and is one of several designs they do.

Great work emsee! Keep it up!

I’ve heard of the trail finders dash series… I’ll check them out! With yours, does it wire straight into the tacho and speedo pickup, and then you calibrate it with a satnav speed reading or something?

I have the trail tech vapour… Waiting to be wired into bike…
Did you get a how to guide or just wing it?
Quite easy to do?

Trail Tech came with full instructions, listing all the various connections. Revs are measured several ways including connecting to coil or winding a wire around one HT lead. Speed is measured by a magnetic bolt the replaces one of the disc mounting bolts and a pick up fixed to lower fork leg. Then the dash is calibrated and you’re good to go. The one i have also reads air temp, engine temp, oil pressure, ave speed, total milage…the list goes on. Will know more when i come the wire it in.

The original speedo and rev counter are both mechanical, with drives taken from front wheel and exhaust cam. To calibrate TT speedo, i believe you just imput the circumference of the front tyre and save.

Sounds great! Keep us updated emsee, it’s a great project you’ve got on the go there…

I’ve emailed Trail Tech to ask them how to wire into a newer engine with a speedo pickup on the main drive sprocket cover… I’m hoping it can just be wired directly into the old connector that used to hook the original clocks up to everything. Will let you know what they say Dan!

Sounds great! Keep us updated emsee, it’s a great project you’ve got on the go there…

I’ve emailed Trail Tech to ask them how to wire into a newer engine with a speedo pickup on the main drive sprocket cover… I’m hoping it can just be wired directly into the old connector that used to hook the original clocks up to everything. Will let you know what they say Dan!

Both wheels now finished. Repainted and new disc’s all round along with new sprocket on the rear. 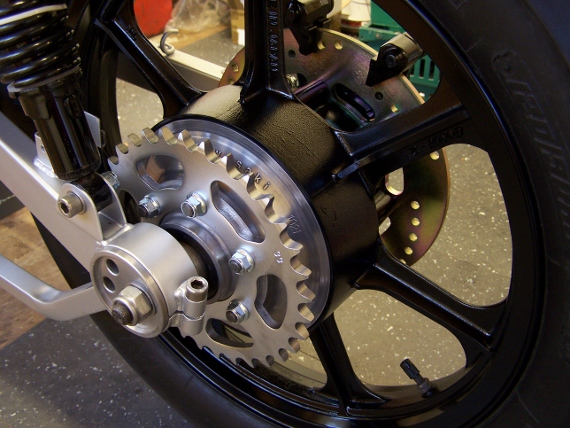 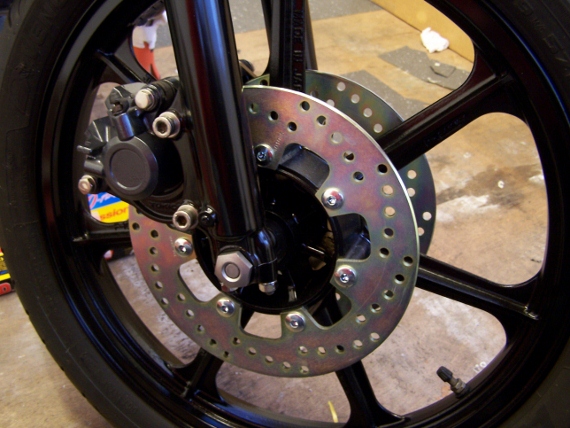 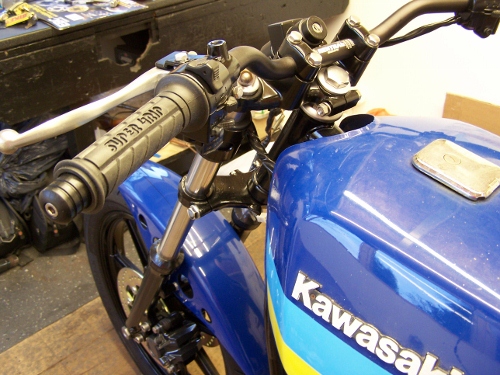 Bike back on it’s wheels for the first time in two years !! 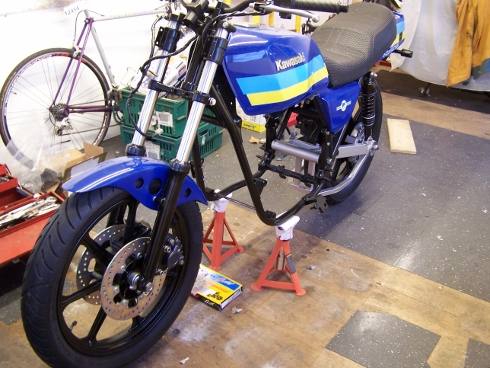 Now looking to start work on the engine, get it installed, and begin on the wiring…still plenty to do.