Hi guys, any of you using one of those ? StormProtector Cover

I just looked outside the window and after 2 days of rain we now have stormy winds in kent and my cover is in pieces. third one. so maybe insteaf of buying chinese crap is time to invest.

my bike is parked in front garden for most of the year so that would possibly do but again, some guys are saying is not good in windy areas. bummer.

what cover do you use?? also looking at this one Oxford Stormex but that is also £60 option so not really “budget” version. but l am now fed up with spending £15 every year. makes no sense.

Bike was okay with some cheaper ones when l used to live in central london, that was nice and sheltered, but out in the open here in a seaside, that wont do

Hey just passed by my neighbours who has a permanent one that folds… If it helps.on cover says armadillo and looks really good and sturdy

I’ve got a Bike Barn thing, like an Armadillo. Well made as far as I can see, had a cover on the bike before and a dirty bike and a cover don’t mix. 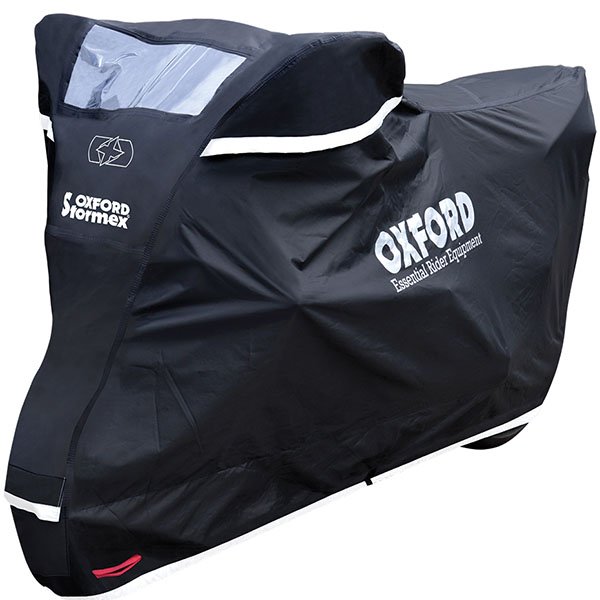 Got that stormex. it has plastic clips that wrap the bike, and you can run a chain through each end. Hasn’t blown off or ripped in 2 years so pleased so far

I know you say you’ve been there but my experience is totally different. I got a cheap as chips cover for less than a tenner off fleabay when we temporarily moved to Walthamstow. More to keep the Bonne’ away from prying eyes but to protect it from the elements too. It was used 24/7 for 6 months through the winter of 2013 and was good as new when we moved the Bonne into a garage when it got used . Since then it has been used as a dust cover in the garage and an outside cover when on tour. Most recently it survived the weekend of the 8th and 9th February 2020 on a hill in North Wales protecting The 250 from all that Storm Ciara could throw at it which is more than my tent did for me. Now after 6 years light use and heavy abuse it looks as good as new.

The trick is to get a good fitting cover and allow the engine to cool before fitting it. If the cover doesn’t snag when going over but is snug enough fit so it doesn’t flap about in the wind it should last, if that’s only for two or three years then so be its still a couple of quid a year well spent.

Any cover loose enough to flap around in wind is a tear waiting to happen regardless of how much hard earned you throw at it. As for the frame tent type covers in claiming they will withstand winds of up to 100 mph they’ve achieved something no tent manufacturer has yet, I’d listen to the bad reviews they have.

I had cheap covers and yes they melted twice, despite being the right size. When you come home from day at work you just want to cover it and go inside, not wait for engine to cool.

A cheap cover may be ok when used occasionally but if you’re using bike every day, it will eventually rip to shreds.

In the end I ended up going half way between cheap and a stormex (because I was tight at the time). I bought the rainex cover and it lasted me for years even when the cover was left outside all day (top floor flat, parking on courtyard).

I know that if I now parked it on my patio, I’d get a more permanent cover like an armadillo. Because it’s foldable it removes the hassle of having to cover the bike. Just drive bike into space and lift…

Finally going back to cheap covers, for me where they come into their own is when you want to go travelling because they fold quite compact.

Cheap covers also don’t tend to have loop holes for chains, which is important if parked in plain view.

Despite supposedly being the right size for my bike, it is a tad too snug between the top box and the bars. However it is pretty tough, so not so compact to travel with, but with regular use at home it does not seem like it will tear like a thinner and cheaper cover.

I have not used it for long enough to properly say how good or bad it is, though. Mainly I bought it as it seemed like it would be a perfect fit with hard luggage attached. And the next size up probably would be!

Incidentally, the next model up, Ultimate Rain, is supposed to be heat resistant where it matters to be usable when the bike is still hot. But it is double the price for that.