Rode in today as ususal and all the part time cyclists and scooter twerps who were trying to avoid the Tube Strike are all out their playing lemming… and every single car has one person in it, in a tie, looking stroppy…

LOVE my bike… I wave at the traffic jams, it gives me a sense of smug superioirty and inner calm!

Biker til I die!

Im right there with you 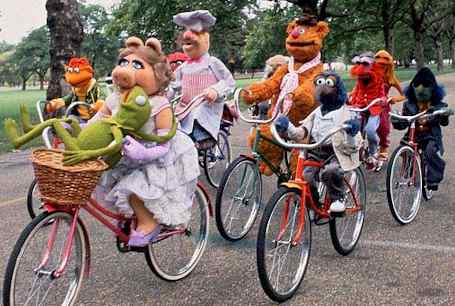 Yup. Nightmare out there. My normal 1hr commute took an extra 15minutes

The one that startled me the most was the biker heading down the M11 at about 8am who swerved across in front of me as I joined at J5 and then headed off down the hard shoulder. What? Can’t he filter!

Cars/vans generally not a problem as they’re not moving! But so many cyclists with earphones on and why don’t any of them have mirrors? I have one on both my road and MTB and wouldn’t do without them in normal use, let alone the conditions today.

I stayed in bed…Ahhh, two days off

I stayed in bed…Ahhh, two days off

I am taking some time off soon, wish it was now though, (slightly jealous)

It took me an extra 10 minutes nearly on my 15-20 minute journey. I guess having a bike has decreased my already low amount of patience

The worst part was nearly getting hit in the face by a van’s wing mirror (as explained in the roll call thread).

why don’t any of them have mirrors?

Totally agree, I think at least a right hand mirror should be compulsory to ride a push bike on the road.

today some poor exasperated car driver offered me to swap…i gave him the finger laughing out loud! it was a joke obviously.

i was commenting with my flatmate yesterday, how silly it sounds that people are more than happy to call in sick when they have hangovers or similar bulls**t excuse, but when there is a proper one i.e. transport problems, they are more than willing to embrace the journey from hell just to show up at work.:hehe:

Yep, many more plonkers out there. As said, the usual taxi’s and vans know the score, but it was the additional cagers that never normally drive that were the problem.

Getting impatient and trying to swerve into free lanes. Was good just cruising through it all and letting them sit in their fumes.

This morning there was a continuous queue of vehicles fro mParliament Square down the A23/A3/A24. Jackie and I joined the queue at Morden. 11 miles of filtering!

I found most bikes, of all types, and cycles were pretty sensibel and considerate apart from the idiots offsiding through Balham. Seen too many nar misses with cars doing U-Turns on that stretch to do that. Even the lorries, buses and cars were in the main bike friendly, movign over and holding back to let the bikes through.

If you’ve nothing much else to do this afternoon, go to http://trafficalerts.tfl.gov.uk/microsite/ , tick the “congestion” and “auto refresh” options and see the red spread over London as it gets towards home-time.

What exactly does a road construction worker look like anyway? I never see any. All I see are 3 way temporary traffic lights, lots of cones, some dug up work and a few un-manned diggers…

I have seen construction looking folk walking in and out of the local chippy though.

Oh, and in relation to the muppets - this morning a dude on roller blades going the opposite direction of traffic on the Old Street roundabout… I kid you not.