Tether your Gopro.
Never had a problem with my camera mount stuck to the front brake reservoir. Left out in the sun on the hottest day of the year appears to have softened the glue.

I’ve always done this just because I thought the downside was having to pick the camera out of the road. You can buy the chords on Amazon, 6 for about £5. Last time I was out the camera vibrated loose from its mount and I was pleased the chord held it.

That was a nice panning shot though. Very smooth.

it was in sunflower mode tracking the sun 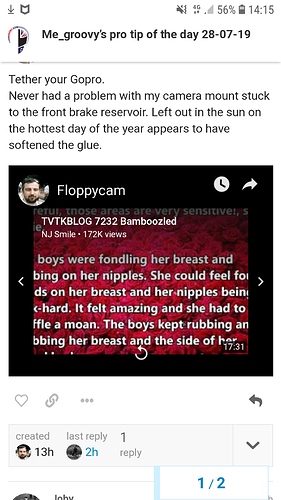 I won’t be held responsible for what youtube’s AI discerns from your browsing habits.

Downvote! I was expecting a video of the gopro coming flying off and you having to run down the road, avoiding traffic to retrieve it

Did that before in Belgium. BigRedS spotted it come off and stopped but not before a couple of trucks had bounced over it.