Nothing too serious, a guy pulled across in front of me, I slammed the breaks on and at the last minute tried to steer round, but unsuccessfully.

My knee has a few grazes, the bike had a few scratches.

What I actually want to ask, the guy was very good, took my into his work, gave me some things to wipe the grazes and a few plasters, but then said after exchanging details, lets not do anything until tomorrow, we’re both very shaken up, I’ll call you in the morning.

My question is, if I don’t report it now and report it tomorrow, does it look bad on me and could it affect any decision?

Report to who, police or insurance?

Insurance. Do I need to report it to the police?

No, not if you’ve exchanged details.

I would just report it to the insurance - why wait until tomorrow, what benefit would that be? Is he offering to get the bike repaired out of his own pocket?

I have no idea what his thinking is. I think he was rather shaken by it too tbh. He did say he had a lot on that evening, it may even just be as simple as it would be very disruptive.

I don’t mind waiting, unless it comes back to kick me in the bum…

Glad you’re ok mate, let me know if you need anything.

Blimey too many Smidsys at the moment - glad you’re ok

Report it now. There may be a clause in your insurance policy about reporting incidents in a timely manner. He won’t get a call immediately anyway.

Another way to look at is what do you have to lose by reporting it now? Nothing. Tomorrow, who knows.

Well hold on… If he agrees to pay for things without getting insurance involved then you could end up not having to declare it?

I don’t see how waiting 1 day would affect things… technically 1 day is a timely manner - for all they know you went to hospital to get checked out - and in this case it’s less than a day. But then again, I don’t know all the ins and outs…

Glad you’re ok and hope it’s not too sore tomorrow!

Mmm… saying “we’re both very shaken up” sounds a bit like ‘I’d like to take a night to sleep on it to see how I can wriggle out of it’.

He might be genuine, but when a relative had a similar incident years ago, the guy who knocked him off said the same thing, offered to pay for damage out his own pocket, but then went round to the police station to report it. He tried blaming it all on my relative and was hoping that it would look bad on my relative for not reporting it. Luckily the desk sergeant was a friend and phoned my relative up to tell him to get himself down to file a report himself.

He’s actually just called to check I got home okay. He’s seems a nice enough guy, no alarm bells ringing in that respect. I don’t think the damage is a huge amount so if he offers to pay, I’m thinking I’ll ask him to make a bank transfer immediately.

Legally do I need to declare it to the insurers either way?

Also, thanks for the well wishes.

Could he have been drinking (beautiful day, beer garden for lunch!! it is Friday after all!!) and doesn’t want to deal with it today in case the Police get called?

If I was him I would pay up , I would not want you coming looking for me

I would leave it until the next day. Timely doesn’t mean same day. You are shaken up as well. I know that offers of sorting it out privately rarely come to anything, but he seems genuine, I don’t think there is anything to be gained by reporting today if a report tomorrow may be unnecessary. What matters is that you report it as quickly as is reasonable in the circumstances. It may take a day to asses the damage to you and the bike so you know what you are reporting for example. As long as the insurer doesn’t incur cost due to delay I can’t see any problem they cause as a result of a 24 hour day standing up before the ombudsman.

personally i would try and arrange it with the guy to keep your NCB and all that stuff! but there might be some stuff i dont know very well so dont go mad at me if im wrong

glad your ok Andy, and as to re[ort or not, I made a notification only call to my insurers 2 years ago. It still comes back to haunt me now, caused no end of problems with car policy’s (I’m a named driver on 3 or 4 policy’s) and despite carole scumbag nash saying they have removed the details of the insurance data base, they did not. So I would leave it for 24 hours or so.

As I think about the damage, new mirror (and the bit that connects it to the bars), maybe a new front fairing but it didn’t look bad, new crash bung and perhaps now I replace the belly pan. I can probably do it for around £700? 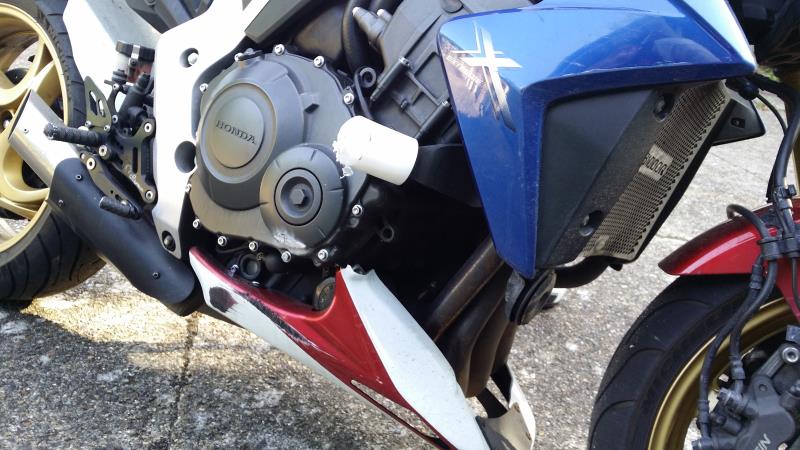 The helmet has a scuff, but I really don’t think it took an actual shot. Still thinking on this one, probably will end up replacing it to be on the safe side.

and the engine casing is scuffed