I have a rather large Japanese Akita bitch (Sadie) who deigns to live with me. Akitas are happiest doing as little as possible, and Sadie’s default mode is “Sleep”. However, I realised yesterday just how lazy she is.

She probably never even flinched when it dropped onto her. 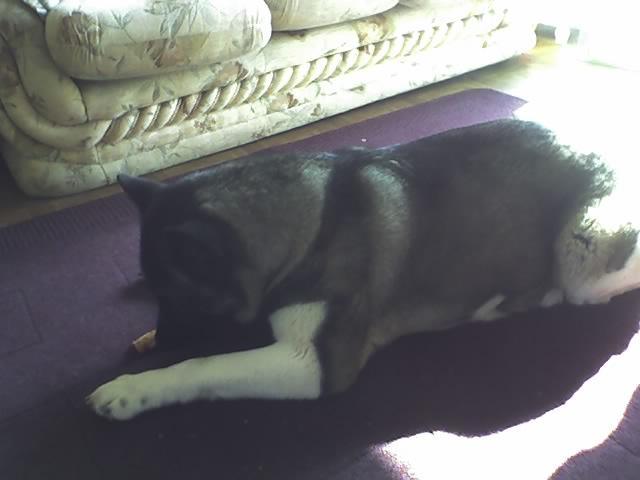 thats one alert guard dog you got there,by the way what a beutiful dog

She is VERY beautiful, and she knows it! One of her favourite activities is to take me for coffee on a Saturday morning so that all the people passing can stop and admire her.

She is very alert when necessary, and has stopped a burglar getting in, but she doesn’t see the postie as a threat!

She works as a PAT dog.

LOL - my kind of dog that

Hi - I think I saw you recently post on VD re your Akita. We have one too. He is an 11 month old male but, on the other hand, is very active. He seems to be quite bored at the moment after slouching around in the Summer heat. I like the PAT thing - will deffo check it out. How old is she and how long can you leave her without her getting anxious?

Don’t be too excited about the PAT thing. TBH, given the nature of an adult male Akita, I wouldn’t expect that it would made a good PAT dog. Dogs have to be assessed by inspectors from PAT, and the one who came to see Sadie reckoned that she was the only Akita they had on the books.

You did see Sadie on VD. Who do you post as?

Sadie is four and a half, and we can leave her alone for quite long periods of time (up to 10 hours), but in fact because I work part-time and Sprogthing is at Uni locally and doing shifts, it is very unusual for her to be left alone for more than 5 hours. Adult Akitas, if content in general, are happy with their own company, although we usually leave the TV on for company.