Anyone know if lazer or any other company make an exhaust like the one pictured, for the gsxr 1000 k4I know about the recefit ones (which i like) but really like the lazer one 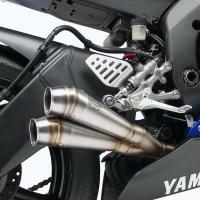 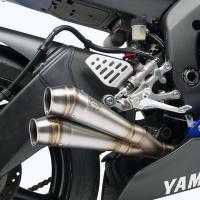 Blue flame do on that is not to far off Jay’s race fit exhaust.

Also Harris do one that sticks out a little further, but I think its just for the R1.

There the only 2 I can really think of?

Dont know if any company makes that for your bike but…

You could either get one custom made. Very ££££££ if its Titanium.
or
You could buy the exhaust you like and have some work done to make it fit your bike. In theory you can put any exhaust (end can that is) on any bike. This is the cheaper option but you have to make sure you get it dyno’ed to suit the exhaust.

Take your ideas to an exhaust speicalist and see what they say.

It’s a pretty small market, Neil, as the exhausts are pretty hard to make road-legal. The Racefit is obscene and nowhere near road-legal. These laser ones ARE road-legal, though they’re very new and still in production. We spoke to them about it at the trade show last Sunday.

… Any recomendations as to exhaust specialists?

I do but im not telling you!