This is the latest crime fighting machine, California police say the T3 scooter, complete with siren and GPS costs 10p a day to run and can hit 25mph to help catch up with crooks … unless they run up stairs

Nothing says “to serve and protect” like a cop riding piggyback on R2-D2. T3 Motion has developed a three-wheeled competitor to the Segway, which it’s currently marketing to law-enforcement agencies and those crazy cops from California were first in line.
The T3 made its debut in Boston on October 14 at a police chiefs convention, though the company says it is looking into other technologies, applications and markets. Currently the T3 is being tested at the University of Southern California and on Catalina Island, among other locations.

The vehicle is powered by two battery cells, which are charged via a specially-designed charging unit that runs off ordinary wall-socket electricity. The little scooter also comes equipped with LED flashing lights, sirens and a lockable glovebox (for felonious squirrels) and even an optional GPS tracking system. That’s a lot more than you could fit on a Segway (and not just because they’ve been recalled, either). We just wish it could say “stop, or there will be… trouble”.

Because the batteries can be swapped out on the field, T3 Motion says the vehicle effectively has an unlimited range. With quick-turning agility, the company also says their scooter has “intuitive handling”. Know what else has intuitive handling? A cop walking the beat. 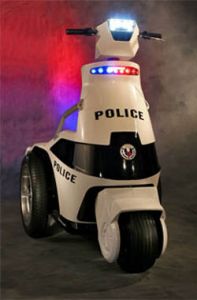 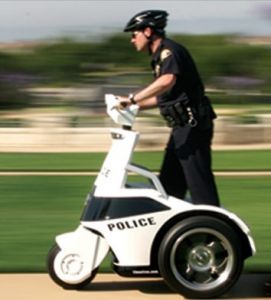 The average US cop being around 300lbs means that thing aint movin anywhere!

Police livery 125cc midi motos would be a lot more and and faster.