Just imagine if motorcycles and scooters were really embraced as part of the transport mix. Yesterday in Trieste and today in Riva del Garda, centre of town areas for large numbers of bikes. 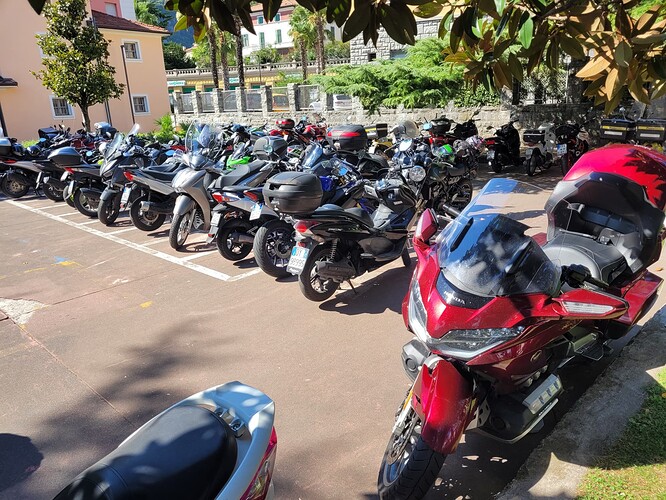 Its too cold here, for the majority motorcycle riding is an April to October seasonal undertaking.

It’s culture, in Europe it’s a preferred method of transportation, where here is still considered a hobby.

Trieste or anywhere else 500 miles south of London is going to be on average 5°C warmer than London. Similarly anywhere 500 miles north of London such as the Scottish Highlands will, on average, be 5°C colder.

Trieste is in Friuli, just under the Alps you donut.
Average as you know means, well average. In winter I can assure you it’s way colder than London. Not taking into consideration it’s well known for its winds.

I shall have to agree to disagree, maybe if you did a little research instead of resorting to the usual insults you’d be more in tune with the facts.

And yet cycle lanes sprout all over the place, some of which are hardly used in summer and almost never in winter.

This morning we parked in a similar place in the centre of Malcesine, Lake Garda. An area of a perhaps 15% of the whole carpark was for bikes and at a guess held the same number of bikes as the rest of the carpark held cars. Scooters/ bikes could so easily become a bigger part of our transport mix for everyone if they weren’t demonised. The people who shout loudest theses days for public transport still want their chai lattes delivered by a bloke on a scooter.

Cycle lane usage summer vs winter is a good illustration of why two wheels, whether that be bicycles or motorcycles, are less popular here in London. Half of the time its just too cold for the majority of riders.

I remember riding through where you are in the 1970’s. We’d been staying in Cavalaire France for a long weekend, after a day in Monaco we changed all our French Francs to Italian Lira and overnighted in Sanremo before making our way across northern Italy and onto Innsbruck Austria. Annoyingly we struggled to spend the Lira as all the shop keepers seemed to prefer French Francs or British Pounds at the time, I think we lost 50% of the value by the time we exchanged the Lira. Fugging, which was called something different but similar back then, was our plan A for that days ride but we ended up wild camping overnight somewhere I’ve forgotten on the way.

That ended up as a 500+ mile two day run, it didn’t look that far on our little map, and we were buzzed by what seemed like 100’s of scooters and mopeds in every town and village we passed through, it was a proper free for all and they didn’t careless whether they rode in the road or on the pavements, so long as they made progress through the congested streets they were happy and it was that hot most of the riders wore little more than their underwear!