CANCELLEDSaturday July 18thWe’re excited to be able to offer every LB member the chance to come and celebrate Jay’s 30th birthday on Saturday 18th July. This special birthday will be marked by an LB Airsoft Shoot’em Up followed by a gathering in a local pub and a visit to a nearby curry house.Here’s the plan We’re holding an Exclusive LB Airsoft Session in association withhttp://www.firefight.co.uk/Date: Saturday July 18thTime: 4pm-8pmLocation: 87 Old Road, SE13 5SU (look for the warehouse building with the blue roller-shutters)Map: http://alturl.com/rpbrPrice: £55 per head – This price includes a photographer who is rather good at getting shots of the action, as well as posed photos. All photos taken will be given to you on a DVD, and will be in hi-res (lo-res ones can also be provided on request).Equipment provided: Ammo (unlimited), automatic rifle, protective facemaskRecommended attire: Loose, comfortable clothing, bike gloves (to protect against finger-shots) a small torch and some insulation tape to fix the torch to your weopon…Itinerary: Arrive at 4pm for sign-in, weapons-brief, and safety brief. At 4.45pm the first game will begin. The final game will finish at 8pm.There are 30 places available so book you place early to avoid disappointment. This is open to both novices and Rambos alike.Here’s some pictures of the last LB Airsoft Dayhttp://londonbikers.com/galleries/1355/airsoft-members-dayFollowing the Airsoft and for anyone not involved in the Shoot-Out we will be moving on to a local pub for a few celebratory drinks and then on to a curry house for a bit of a nosh-up.Everyone’s welcome, the more the merrier.A £25 deposit will be required with your booking by 30th April . The balance will be required before 18th June.Let’s make this a birthday for Jay to remember ;-)To BookClick Here!

Put me down for this? Sounds like a laugh. Do they do discounts for the elderly like me?

Hells yeah! what a great idea!!! im in for sure

Am I banned from this game?I won’t be inviting the team along, honest… 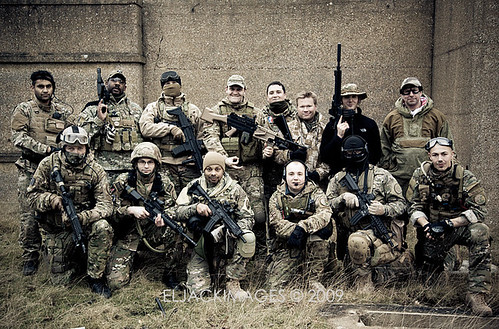 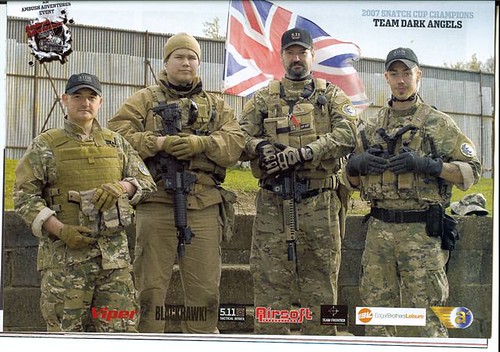 Am I banned from this game?I won’t be inviting the team along, honest…

I expect you to be there young man;)You may have to leave the arsenal at home though;)

Great, I’m gonna get my ass handed to me

I think you should just be target for the day Jay. Just don’t have a hissy fit when you get shot like a certain M Cashmore :laugh:

Had a look at the web site. Some of the people are dressed like Blackwater Worldwide, (sorry Xe) employees!

Am I banned from this game?

I won’t beinvitingthe team along, honest…

I work with the big gurning mug in the middle of the back row there!

ooooo stick me down

always wanted to have a go at airsoft…

if i can get employed im up for it!!

Please excuse my ignorance but what is Airsoft? Is it like Paintball?

Having seen the picture someone posted I’m surprised that on the way to these events carrying such an arsenal around the city that people don’t find themselves being ‘sternly talked to’ by Trojan and his colleagues…!

Exposing those things in public will get you shot. Rules are pretty strict as to immitation firearms in public. You can only get them if you’re part of a skirmish group. Unless of course you want 51% of the gun painted in a bright, unrealistic colour… then you can buy one. Good chance you’ll still get shot waving that around too!

bugger that looks a lot of fun! can’t go though i’ll be in poland for my wedding. i’ll see if we can put that off a week:w00t:

30, is that all, someone check his bike license card, i had him down for a bit more than that. :w00t:

i’m out of a job in 2 weeks so i’ll have to say no, but would love to come and watch.

I’d like to come along please… only ever done lazer quest and that seemed a little tame yet I kept getting killed so this might be more fun!

I’d def be up for this