It's time for my bike to break

Did that properly take you a month to pull off?

Didn’t want to take it off til I had the new one ready to put on. Plus I needed a 36mm socket.

I got one sitting in the tool box.

Can’t remember the last time it saw action, may have been the ol’ Bonne’ front sprocket but before that is anyones guess.

Bike all back together and refilled with fluids. A month off the road and of course the battery isn’t strong enough to crank over anymore

I beg your pardon? two months in the garage untouched and the R6 starts straight from the button.  do you use it to make tea or something?


I beg your pardon? two months in the garage untouched and the R6 starts straight from the button.  do you use it to make tea or something?
silveR6

3 year old battery, used in all weathers, running an immobiliser

I beg your pardon? two months in the garage untouched and the R6 starts straight from the button.  do you use it to make tea or something?

Not tea, but he does run a fondue set on it…

My bike would not start on Friday after a month of disuse, apparently 13.1V is too low for a 12V battery.  And I always thought I understand how numbers worked.

It’s the amps not the volts, NT will be along in a moment to explain.

Amps is what counts to crank the engine and maintain >9.5v at the battery.

Battery
cranking load test - Disable the ignition and fuel systems and turn the
engine over on the starter motor for 15 seconds while checking the
voltage at the battery terminals. If the voltage drops below 9.5v then
suspect a faulty battery or battery fault.

Although you’ll seldom see much over 12.8 from a ‘12v’ battery unless its receiving a charge or immediately after receiving a charge. The correct way to check battery voltage is to leave the battery for at least 30 minutes to rest after charging, including any charging by the vehicle charging system, and then to turn the headlamps on for 2 to 3 minutes before testing the battery’s level of charge. The reason for this is because you’re testing holding charge, that’s how well a battery will hold it’s charge, not its maximum holding capacity.

Which, of course, would be why it is fully charged to 14 and a bit volts!  Crazy times.

I am sure the battery is fine, having being left alone for a very cold month would understandably drain it.  Although surprised how close to fully charged it needs to be to get the engine going, even if the number on the charger was not the true value for that.

Sadly being parked outside there is no option to leave it on a trickle charge, so maybe I should get a solar charger.  But between the better weather and rising the bars solving my hand problem, this should not be a problem for a while now.

Thanks for the explanations.

Get a jump starter… They go for about 35 or so and I’ve used them a few times when temps drop.

Often the battery just needs a bit of help

So, got a message from Matt Liddy (he of the OMC). “Mian you plonker, this is what’s wrong with your bike…” He diagnosed wet plugs from cranking with insufficient amps to spark. New plugs installed and blew out each cylinder for a minute with an airline, definite smell of fuel coming out and old plugs looked damp.

Does the same thing still. Going to call a mechanic out to it.

On the Plus side, got the Tuono working flawlessly. MOT with no advisories tax and insured. So using that now and finally got to give my mate back his R6. 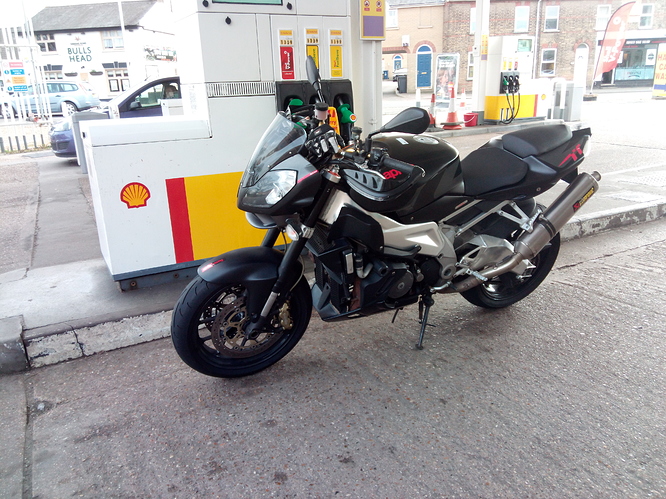 Nice bike, but what did that nut on the floor under the engine come off?

the nut sits on the bike