That I picked up my first brand new Hinkley Triumph.

Triumph Daytona 900 from Jack Lilleys - here I am posing by it after I picked it up .

Shakespeare’s Sister, Snap "Rhythm is a Dancer ",Wet Wet Wet,Whitney Houston with "and I will always love you!!,Freddie Mercury banging on about Barcelona was all in the charts… 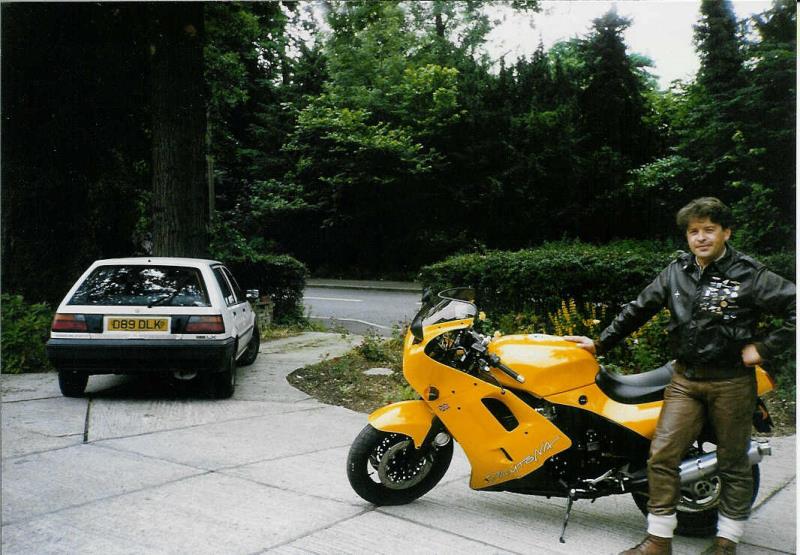 and a nice Datsun too

Oh done many more than that …

… I must dig out some pics from 1973 :crazy: but I blush at what I was probably wearing then!

Socks, look at the socks! :laugh:

Where are your badges now?

Is that the walking boot and socks look? Nearly ended badly for me when I stopped and couldn’t get a foot down due to the laces having caught the pegs…

Thought for a moment you were complimenting his legs!

I think he should change his name to Kim Jong Ross

Still got the jacket - my daughter wears it now…

Went to the TT one year like this with just a thin pair of ‘waterproof’ nylon trousers and overjacket and it pissed down all the way - I was effin nearly an exposure case.

I hope I’ve learned a lot over the years …:blink:

Like most good daughters, they love to steal Daddy’s Leather jacket!

Done the same trick myself, except my older sister got to before me.

just to make you feel old, its 21 years ago on friday that i was born :hehe:

John Major was elected PM in 1990, following Maggie’s resignation. I worked for him for a while. Nice bloke. Liked a curry on a friday night. (Think about it)

John Major was elected PM in 1990, following Maggie’s resignation. I worked for him for a while. Nice bloke. Liked a curry on a friday night. (Think about it)

That’s one curry that , even thinking about it, turns my stomach :w00t: