Is this helmet ok?

What do you think of the helmet AGV Vente UNO


was going to go and buy it today…

For £75 it seems fine. AGV are a well known brand so you can expect it to be functional at least.

The Vente Uno does not appear on the SHARP site, and the HJC I16 only has two stars (not sure if there’s a difference between I16 and I16 Scratch MC5…)

have a look at the sharp site

Cool that’s what I was not sure of the brands. Its got a 4 star SHARP rating so that will do me for now at least.

HJC not a good name then?

maybe I should’ve looked better at the detail page of the AGV helmet, where it states it has 4 stars, lulz…
(still, doesn’t appear on the sharp site itself though, unless it’s under a different name? )

I’ve had two HJC helmets, one closed and one with a flip front. They were comfy and both lasted well, but I have found them both to be noisy. Maybe this is to be expected at the price point.

yeah may be so. to be honest only only really a temp helmet any way. just need it to do its job for now then at some point i would get a proper good one. think I stick will the AGV.

it never mentioned if it was fog free should I assume that its not? and just get another visor to go with it.

Just beat me to it there rsciw. Although the HG site says that the AGV has a 4 start sharp rating.

Put them on and walk around the shop for a bit to make sure they fit, I made the mistake of buying a helmet a few years ago after only briefly trying it on and it starts to press on my forehead after being worn for a while.

It also didn’t have the ‘clicks’ on the visor so it can be partially opened so I pretty much went back to my old Arai.

In most cases the ‘fog free’ ones fog up. Best way to get around this is either leave the viser open a crack or buy some anti mist, spray available in all good retailors etc…

Pinlock inserts is the only way to get proper fog free. Tried the rest and then finally tried pinlock, massive difference.

You can even buy visors for HJC (and probably AGV though I am not 100%) which come with pinlocks and fit inserts.

Thanks, I was going to try get up to Ratty’s shop but wont make it there in time before the sale is over. was half thinking of ordering online not sure thats a good idea either.

may be one of the rush jobs after work. 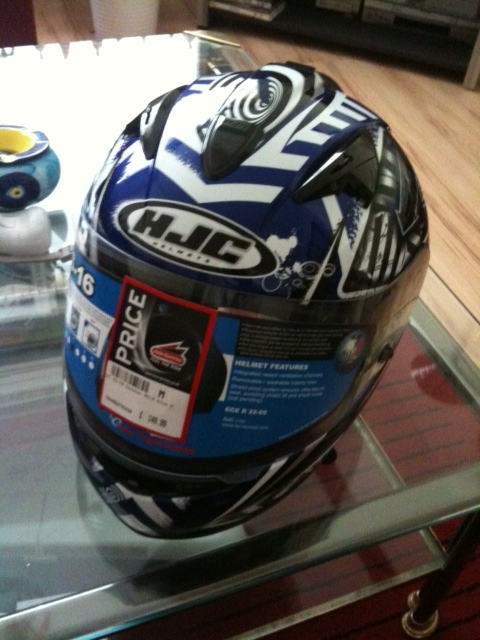 gratz. nice. #1 helmet brand in america. theyve been around a long time.

very nice choice fella! NO.1 sellign helmet brand in the world, and for good reason!

cracking value for money, they will take a pinlock as they have the pins already ; )

hope it was fitted well, where di dyou buy it? which HG store?

you will prob have to order a HJC pinlock from HG, get a dark tint and a clear one, very very easy to change, get the lads in store to show ya ; )

What do you think of the helmet AGV Vente UNO


was going to go and buy it today…

i’ve sold quite a few of these, two have been bough tback to the shop with thanks for saving someones head, i’m glad i tae the time to fit properly, i wont sell a helmet to someone if the fit isnt to my liking.they are great for the money, so are HJC its whichever fits the best.

yeah they did both did fit well. the AGV seemed a little funny when i tried it on. so this one and just said screw it ill spend the extra and it feels good on my head to. person in the store said there about the same in ways of protection so and that they are both good starting helmets.

went down to the one in stockwell.

this is the one with the inside dark visor got an orange one as well.

do you think you need another outer visor then as well?

people in the store were very helpful made sure that i was happy with my choice and that i did fit well. good service there

Inside visor should normally be enough.

if you haven’t done so yet, post a praise thread in the Praise or Shame forum then

I’ve tested a couple of HJC helmets for a magazine and owned a couple more.

Brilliant value for money but at a hidden price.
1: They rarely get a decent SHARP rating.
2: They are, as Gazaragi said, very noisy. Hm. Might be a bit unfair there. The FS-11* is very,very noisy