I have no idea where to put this, but I reckon it’s pretty cool and it’s something to look at.

The ISS is passing over London each night this week and you can see it. I’m not sure why they’ve only put June 15 as the start date, because I saw it last night, and my friend saw it the night before.

The Guardian have the timetable at least: 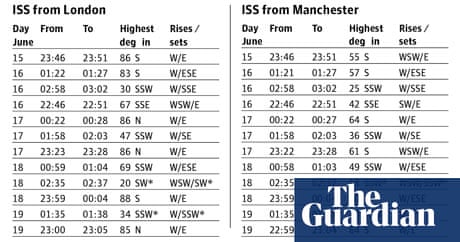 It’s strange to look up and think there are people in it.

If you’re awake at that time, stick your head out the window.

Cool - I’m curious to to take a gander

Though its just not the same since they stopped the shuttle launches … really wanted to see the last one :crying:

I was at my folks place in the south of spain a couple of years back and watched it go over head then a couple of times. Quite strange to think of what it is thats flying over head, mind you its quite quick so you will have to keep the eyes peeled or you will miss it. It’s not that obvious at first as it looks like a plane with its lights on but it doesn’t flash and is quite a lot higher lol Prey for clear skies or you have no hope of seeing it.

If you want to see it at other times or more satellites try www.heavens-above.com

A bit nerdy but does the job.