you would think parking in our office garage was safe, but an idiot just reversed into the bike…

mainly small cosmetic damage, but due to the bikes paintjob its very annoying.

he has obv claimed full resposibility. so question now is do i claim? or repaint myself?

Claiming will mean a claim against me right?even if they have accepted responsibility 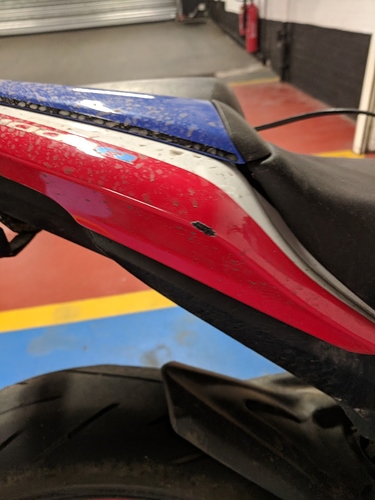 get a quote, see if he’s happy to pay the cash! it will cost you on your insurance even if he accepts full responsibility.

Apparently if you get hit once there is a high chance of it happening again within the next 2 yrs. I’d say it was all horse shit but it actually happened to me!

I had plenty of those over the years… If it’s just that little chip, I’d be very tempted not to claim. To be honest, the one claim won’t affect your premium that much but you will have to declare it for 5 years, and it makes getting quotes and taking policies out that much more of a ballache. Also, if something else happens i.e. 3pts or even sth that’s not your fault, they can start adding cost on. Probably nothing too dramatic but enough to annoy.

insurance is a f-ing scam


insurance is a f-ing scam
Panagiotis

yup, it'll be classed as a non-fault crash

The sand/oil crash I had was this, as I didn’t claim but used their lawyers to try and claim off the council but they couldn’t prove who put the sand down

Remember that the cost is not just about getting the repair done, but about the other expenses incurred such as fares or even a replacement hire bike (if necessary), whilst your one is being repaired.

I have a spare tail, so can swap that on, and post the tail to scorch to fix.

so why bother with the question if you already have a solution to this problem?

so why bother with the question if you already have a solution to this problem?

Cause I want to moan!!

Don’t claim and use a small sticker to hide the damage.

Not necessarily. An Aussie movers van reversed into my Volvo. I got a quote from Volvo and they paid directly using a company credit card. No insurance involvement at all. The firm may have budget set aside for incidents and people driving into things.

You’ll need to check the other extremeties too, mirrors, footpegs, crash bungs, swing arm (which is usually the third most expensive component of a motorcycle), fairing, indicators, exhaut, what else is there?

Insurance companies now have a legal obligation to do everything reasonable to keep costs to a minimum, so you’ll find that his insurance co will be willing to deal with you directly and you can bypass going through your own. However, under the t&cs of your own insurance I can guarantee that you are obliged to report any accident, regardless of fault. It’s a pain and it will put next year’s premium up but in my experience its minimal thanks to being able to shop around and get a better quote.

Or get some naff stickers and live with a few battle scars.

It’s lkely the cost of the repair is less than the excess the company has on their van insurance, in fact, their policy may be to pay for all repairs themselves thereby reducing insurance costs. Get an estimate for the repair and speak to the fleet people at your company, chances are they’ll just say “go ahead, and get the repairer to send the bill to us”

company agreed to settle without insurance. so thats a result