Well first thanks to Grafton motorcycles MK for letting me have a test ride on the new FVR1200 even though I hadnt pre-booked one, plus a few points

Now I only got 15/20 mins on it but all I can say is WOW what a bike :w00t: it is so light and well balanced and with masses of ooomph, even in the lousy conditions this morning it felt sure footed with loads more to offer.

Is it a Blackbird replacement…? for me I would have to say it rides like a VFR800 but with the get the f**k outta here of a 'Bird, but ultimately no which is a shame, the luggage is tiny no doubt aftermarket ones be out soon, and no centrestand which costs extra is annoying, thought the pillion seat looks small in pictures it is quite wide so could be comfy, 600 miles in day though Im not sure.

Even though it looks fugly in pix up close its not too bad and the fit n finish on panels etc are typical Honda, so before you dismiss it go and blag a test ride you will be impressed I was, would just longer ride in better conditions.

So its yet another Honda you can jump on and feel right at home on, just at warp 8 not warp 10 of a 'Bird, busa, zzr14

Would I buy one ?..if I didn’t have a 'bird and was looking to move up to a large tourer with sporty pretentions and good riding position then…yes I would 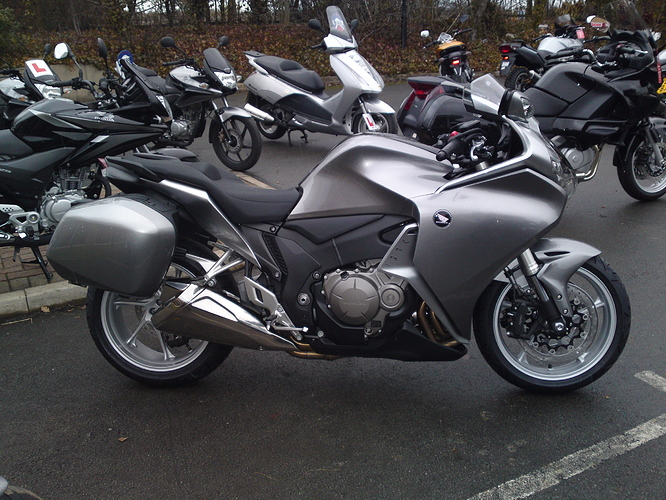 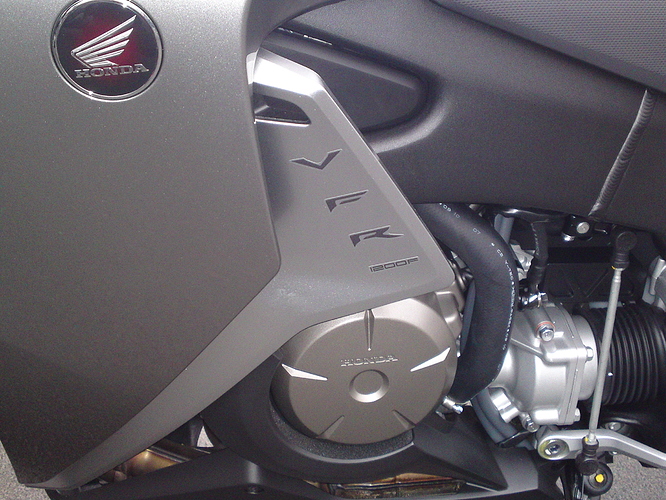 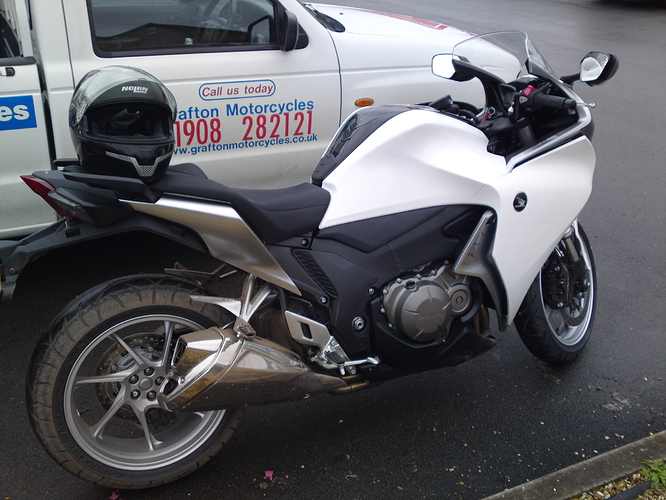 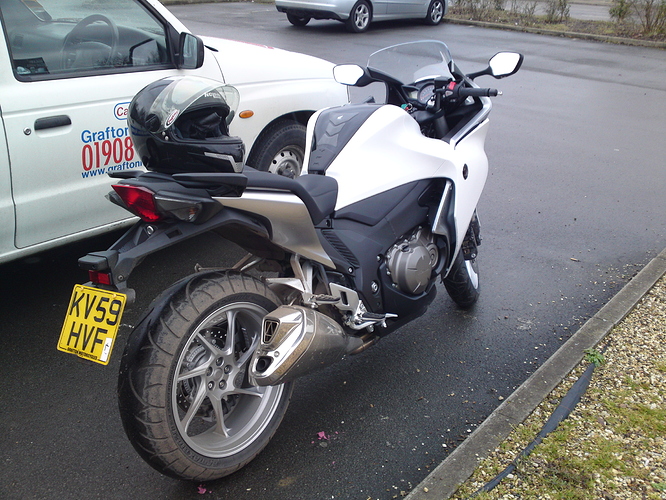 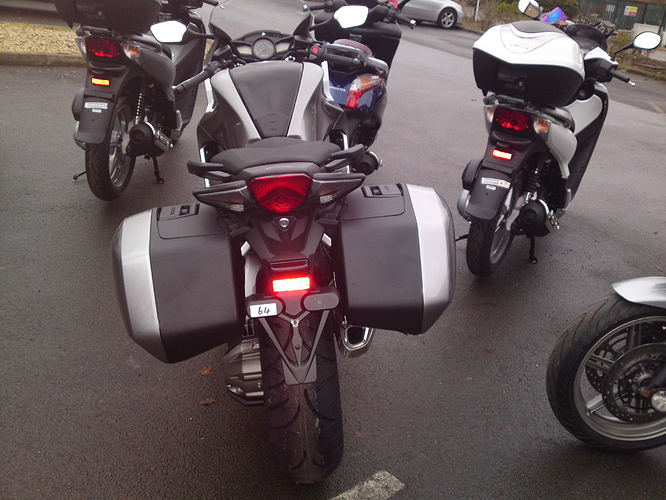 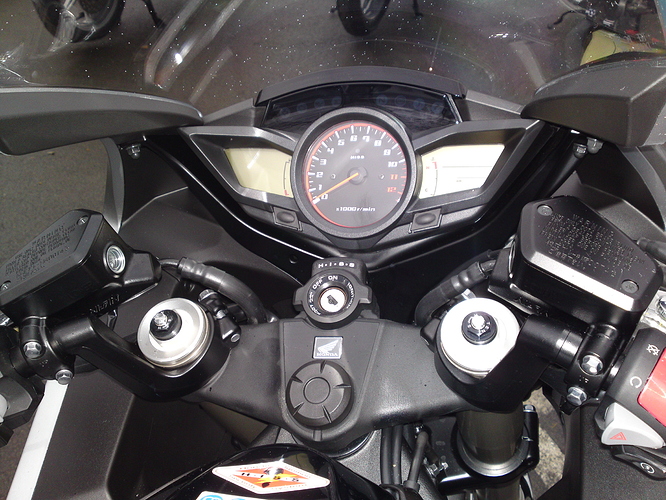 Would I buy one ?..if I didn’t have a 'bird and was looking to move up to a large tourer with sporty pretentions and good riding position then…yes I would

Having read a lot of reviews sports tourer it isn’t. It seems that the average tank range on the reviews is around 115miles! Hardly tourer material.

It seems that the VFR1200 is a brilliantly engineered bike it just doesn’t seem to know what it is.

It looks physically very much like a K series BMW.Which gives the game away - the bike is designed to go head to head with the BMW K and win back ex-VFR riders who defected to BMW and bought bikes like the K1200S.

Plus you get a better bike, for the same money that you can actually tour on. Rather than touring petrol stations.

Thinking on it the two big bikes that I have owned the CBF500 and the TDM900 could both get me to my parents and back on a single tank. (~220 mile).

This I would be worried that I would have to stop and fill up before I got there.

trouble is Kev both of those bikes you would fall asleep out of boredom before you ran out of fuel or got to end of road :D:

Thanks for the review Steve … think you may have saved us a wasted journey in a few weeks time:P

trouble is Kev both of those bikes you would fall asleep out of boredom before you ran out of fuel or got to end of road :D:

The 500 maybe, but don’t underestimate the tdm. And it would make a better tourer than the VFR1200 and at a cheaper price.

Still think the VFR800VTEC is one of the best looking bikes.

Out of interest what’s the price tag?

Out of interest what’s the price tag?

£11.5 k luggage n centrestand extra…prolly near £2k for those add-ons

So will prob be like 13k on the road… is it just me or is that 'kin expensive. Won’t be rushing out to buy that in a hurry!

saw one upclose on chiswick honda yesterday and it looks alot better upclose than in all the press pics.

I didnt test ride it (was with the missus on our way to B&Q) but from looks alone i think its cool! :w00t:

Thanks for the review!
I am booked in the week after next for a test ride, I really like the way it looks, its different and fresh and has some very cleaver form changes on it.!!
Very interested on how the v4 engine performs, still thinking they might stick it in a Blade for next year.

looks gorgeous in both white and silver!

that’s one sexy looking bike I have to say

Had a ride on the new VFR recently as well, luckily in my job I have been able to ride lots of different bikes in the last few months (Pan’s, Deaville, Hornet, GSXR, Sprint, Tiger 1050, VFR800, CBR600RR, Dayton 675, Vstrom, Street triple).

It is nice handling and much lighter on the move than you would think looking at the spec sheet … it weighs more than a BMW GS1200.

The tanks too small, way too small.

The instruments are a joke … 5 years behind Piaggio group … and as dated as Triumph… I just love that moment when you have to sit there with index fingers of both hands jabbed into the dashboard just to reset the trip. A necessity for this bike with its laughable tank range.

Are the lights as good… didnt get to find out.

For £9000.00 its not a bad bike, in fact its a very nice bike, no quicker (slightly slower) but a bit better handling than the Triumph sprint.

Did I mention the fuel tanks too small

What did you find outdated about the Triumph instruments.