Hey I may turn into a professional photographer yet!!!!! - Stunt pic!

I was at the ace a few Saturdays ago and witnessed sparky doing his thing. Thought it would be rude not to take some pictures and I managed to take this beauty (see attached) lucky shot me thinks but very impressive. It was taken with a point and shoot casio 6 meg digital camera with standard shutter speed setting. Enjoy! 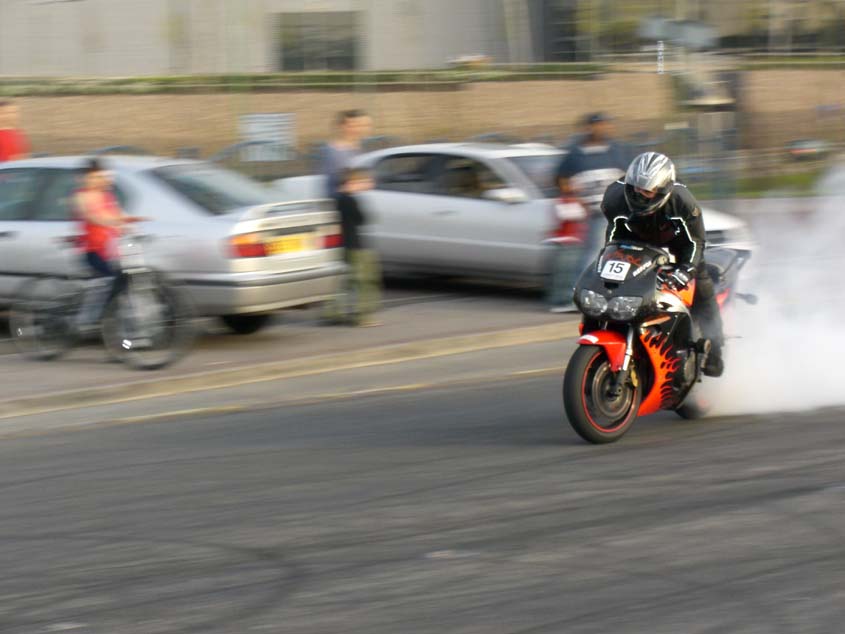 Great picture Terry! Sparky looks on form there, love it! His new paintjob looks the business as well…

On Form !!!..I didnt know this Bloke at all untill a while ago when I got introduced to him…Is he ever off form then ??..I watched him do his stuff one afternoon at the Ace and he was the Mutz Nutz …I even saw the Bloke change a Burnt out back wheel in about 5 minutes…it takes me that long to choose the right f**king spanner !!!

Also good to see some Sparky Action, definately one to watch is that boy.

With ya on there Jay, one mean looking paint job.

Have to say that Sparky is the best that I’ve ever seen up there.

Thats a whole new bike init? all the front fairing was cracked and cable tied and in that pic its not there what i can see unless he just got a new front end

Its the same bike just all new panels. His blade is one reg number out from the one my brother had. Weird eh! Its a testimony to Honda that its lasted so long.

Sparky is THE man!!

There’s been quite a few engines replaced, you know Terry

Even Fireblades can’t stand THAT much abuse all day long!

First of all sweet photo Terry and by your paint job comments is Sparky the same guy who had the red and white blade? I was watching him friday night hes Da Sh!t.