I’ve been watching this game through it’s development and REALLY want to give it a go. I like to have a simple “button masher” type game installed on my PC for times that I want to game but don’t care to be arsed with alot of strategy and such.

It’s a Diablo clone and looks to be a damn GOOD one, at that. (It should be…it’s made by the same people.)

I was thinking that if several of us got it, we could set up a secure server to play together…anyone care to have a go?

Looks like an amazing game, think it only came out today in london, so if anyone bought it, they aint gonna be on here, they are going to be playing it!!!

I’ve played the demo. It didn’t really grab me as I expected it to. It does have a unique point to it, compared to MMORPG’s I play such as Guild Wars or City of Villains, in that you actually control it with third person aiming like you would Hitman. Yet it’s still an RPG.I didn’t dislike the game at all (the american impression of a british accent always makes me laughm:)) but I wasn’t instantly drawn into it. I should probably give it another go.

I have not played much in the way of FPS for a long time - I prefer my games fairly simple and fairly violent - I can’t say any FPS has engaged me as much as the original Doom did when it came out, however, I picked this up, mainly because the locations are all so well known to me. I am actually finding it quite good fun in single player, mainly because it is more like Doom than almost anything I have played since. I am sure many people will find it unsophisticated, but for me, now very much a part-time gamer, that is one of the attractions.

You don’t surprise me at all. Looking like it’s played doom style yet you have character progression as well, seems like the ultimate combination to me. Except, from my CS:S days I learned that my aim sucks

The character I started with was a blademaster so not much opportunity for the aim business but the sheer notion that you actually have to fight people rather than depend on a “dice roll” gives it an interesting edge.

Time to give it another go I think. Good thing my beloved is on nights

I just picked up Hellgate: London tonight…I’m preparing to install it now.

I’ll log in later and leave a few “first impressions…” 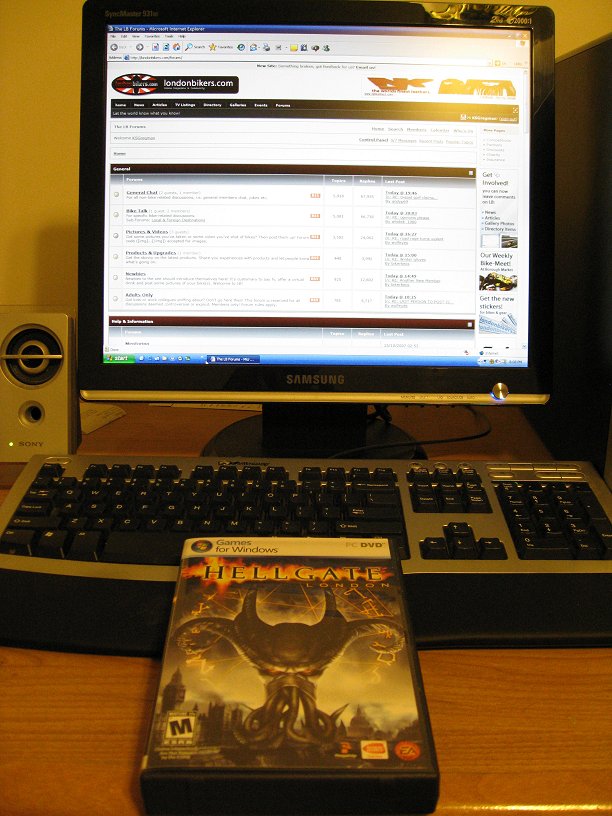 Anyone having trouble getting into their Hellgate account? I registered during setup but find that I always get an incorrect user or password message. If I try and re-register I get told my account already exists. If I try and use the lost password link I am told my account is not recognised! Catch 22 becomes Catch 33 when they ask you to use your account and log into get customer support! Duh!

I had the same problem when registering on the website for the news updates. I accidentally used the wrong email address and was never able to change it.

After playing each class to lvl 6, I’ve had sufficient time playing the game to write a brief review of my likes / dislikes so far…

The Multi-Player sucks…HARD. It is almost completely non-funtional out of the box. If you’re thinking D2 style Battle.net, FORGET IT. This game has NOTHING like it, thus far. I cannot BELIEVE that the people who made D2 such a success screwed the pooch sooooooooooooo hard out of the gate with the multi-player aspect of the game. I won’t be paying to play this game any time soon, it appears.

The tilesets/locations have gotten a bit repetitive and my highest toon is only lvl 8. You’re in the sewers…or in the Underground lines…I only just cleared the Covent Garden area…having been there myself IRL, I can say it’s cleverly done. I took my first trip to Hell, too…kind of neat. I’m hoping for far more ABOVE ground action in what’s left of London.

There is a lot more above ground in Picadilly which is where you go next.

So how does the multiplayer work? If it’s not like D2, is it like any of the other MMORPGs? Such as Guild Wars or City of Villains etc?

That’s a crying shame. It doesn’t sound like the sort of game I want to get then. Perhaps I’ll keep waiting to see which is better out of the Marvel Online game or the DC Comics one.

Multi-player is SUPPOSED to work as follows…

Start a multi-player specific toon…zone into the game…fight your way to a Station (Holburn Station is the first Underground station you unlock)…once there, you can meet/interact with other players to form up into groups and fight you way through additional zones (Tottenham Court Road, Covent Garden etc etc.)

Now…the good news is that the single player game is wicked EPIC fun…stable…gorgeous to look at…unbelievable sound effects…just awesome fun. I’ve settled on an engineer as my “Main” character after playing each class to level 6. I had my initial Engineer up to level 11 before deciding to re-roll after realizing I had gimped my skill points.

Here are a few screenshots I took last night while fighting my way to the Hellrift inside the British Museum.