After the thread about BMW and their latest attempt at a cruiser aiming squarely at HD, and Indian I watched this on YouTube. Quite an interesting look at Harley Davidson’s history, business decisions and international& domestic politics at play.

Hardly Able Son in all corners of their business

Two Enthusiasts podcast often goes into depth with how badly HD is run and how their sales rely on boomers who are now dying off.

The last CEO brought in loads on innovation and new markets but they fired him before they could see the fruits of it.

Two Enthusiasts podcast often goes into depth with how badly HD is run and how their sales rely on boomers who are now dying off.

Not just HD. I read an article recently where they asserted that over 50% of bikes sold are bought by pensioners each year. (Something like that anyway…)

I’m a cruiser rider, and quite frankly a HD just doesn’t appeal. Far too aggricultural, and I’d have to dig out the imperial toolkit.

HD are more exposed the younger generation are looking for something modern and fun or small capacity for commuting. HD have nothing in that range.

They tried years ago to introduce a modern engine with the vrod but sold badly it home market and it was canned.

Expensive and crude. I’d love to do some riding in the states on a cruiser but would you choose a HD or an Indian?

Depends, if I was likely to need parts then a HD, as they are everywhere.

Not just HD. I read an article recently where they asserted that over 50% of bikes sold are bought by pensioners each year. (Something like that anyway…)

First bike show I went to was at Earls Court in the late 70s it was a much younger crowd back then, mostly teenagers & folk in their early-mid 20s. Try looking up pictures of the crowds then compared to the people attending the NEC these days…

In fact a lot of them are probably the same people.

Back in the day motorcycles were as cheap as chips and within the grasp of every working man and his son. Then along came legislation, stricter test standards, years of recession, the three day week, factories closed, unemployment figures soared to the highest since records began. The boom was certainly followed by proper doom and gloom then drugs hit the streets and things were never to be the same again.

What’s the connection between drugs and motorcycle prices/demand/sales NT?

If you want some kicks. Bikes were cheap so you could get one for fun. Now they are expensive so either people steal them or do drugs (because drugs have become very cheap) or both.

To give you an idea of how cheap chips were as a 16 year old I could afford to own and run a motorcycle on apprentice’s pay of a paltry £5 for a 48 hour week. That was after I paid me mum £2/10/- for me keep and I still had enough for 10 cigarettes and a cafe bacon butty lunch each day and a proper good Saturday night/Sunday morning with the g/f on pillion.

I’m thinking that £2/10/- (£2.50) would be the equivalent of around £40.00 per week today and Harold Macmillan had already told the previous generation they’d never had it so good!.

That was the life

You can see it in movies like Quadrophenia. A whole aspirational generation getting mobile. These days the only youth bike movement seem to be the criminal element.

We were there man (almost) @GeoffB

To be honest, the main reason behind the change wasn’t drugs & the like, it was simply that cars became a lot more affordable.

The change in the learner law didn’t help either. The car option became a lot more attractive when alternative was a 125 rather than a 250LC.

Well, HD has been removed from the S&P500 stock listings: 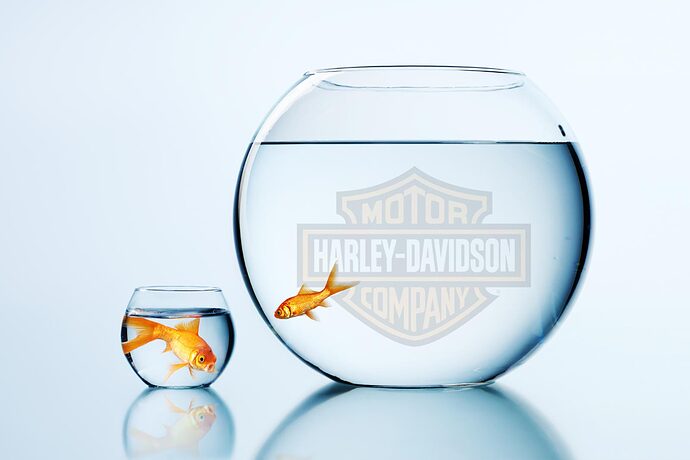 As the company's stock continues to struggle, Harley-Davidson has been removed from the prestigious S&P 500 stock market index listing.