ok guys…after the mishap of leister square,i finally got hold of me crash bobbins …has anybody fitted them themselves?..ive read the instructions but im faraid i’ll balls it up…

Jay should be able to help (I think).

Erm I was gonna do a guide to fitting them, but got distracted…

Wanna fit mine for me for a nice fee?

Fitted mine and assited MilleMonster - take your time and its an easy enough job.

Agree with Stan, I needed to drill both my side pannel’s. Take plenty of time, dont rush the drilling and check your pilot holes well. 9/10 times if the pilot holes off when you come to drill the main hole it will cover up the pilot hole.

It was about time eh mate? A bit too late actually , lol

but thanks for the advise guy’s will have to take my time and plan everything out well before fitting…one thing that i may have overlooked tho…or havent yet seen…no tourqe settings for the bolts…hmmm any idea’s?

you might have your bobbins! but you still need some muscle on them twiglet legs!!!ha!!

Smiled, when I put these in I remove the fairing panels. Undo the original bolt on the bike where the bobbin is going to go (quite often they have threadlock on them). Insert the new bolt. Offer up the fairing panel to make sure you have things in line. Put a large blob of Tippex on the end of the bolt and while it is still wet press the panel against it. The inside of the fairing panel is marked by the tipex and then you know exactly where to drill. Make sure that the hole you cut is slightly larger than the crash bung.

Right, a quick set of pics of me doing it

First, the bits involved. not shown is the pointy threaded bolt that is used in place of tippex (re Chuffster ) to mark the fairing prior to drilling.

Second, the engine bolt taken out. Make sure you have the correct socket/extender bar etc before putting the bike on stands, taking all the fairings off etc and then needing to ride to Halfords etc…

(Poxy bleedin’ uploader shuffled them dammit. Hope you can tell which is which. If not, go to dealer LoL ) 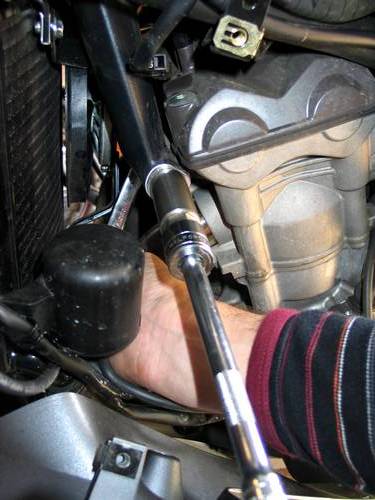 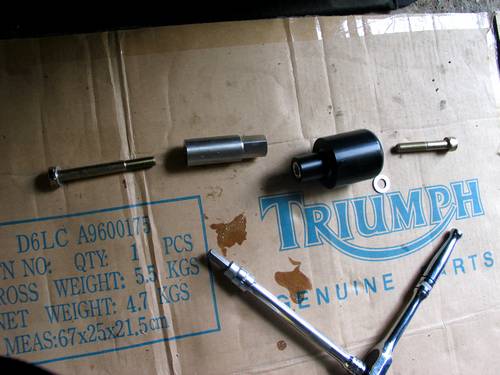 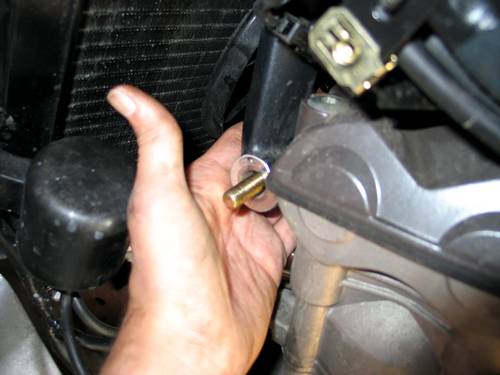 Next up, pointy bolt screwed onto engine bolt ready to have fairing fitted on top. 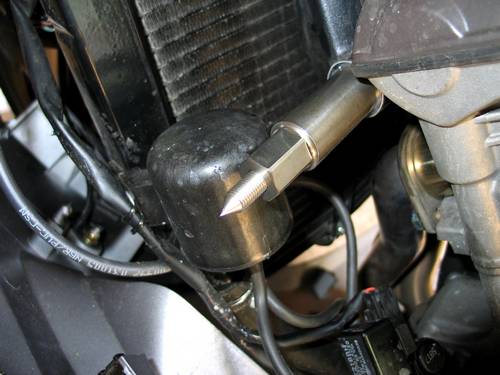 Then fairing replaced, and thumped with open palm or rubber mallet against pointy bit to raise a dimple on the fairing indicating where to cut. 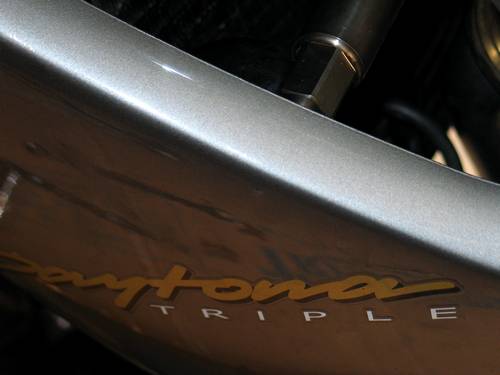 Then fairing removed and drilled. Put tape around area to minimise drill skittering around, and I drilled from the front as it ensures a clean cut on the visible side. Perhaps you could cut from the back, but I think there is a danger of paint flaking or plastic chipping as the drill breaks through. 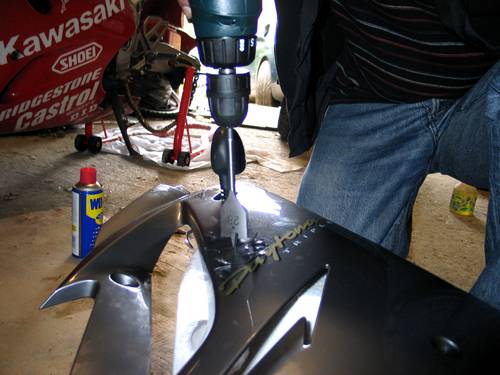 Then tidy up the hole with a bit of sandpaper, and always buy a bigger drillbit than needed esp if any curves are cut through, If the fairing ends up touching the bung, it may chip paint etc.

I painted mine with some grey enamel (yes, Humbrol model paint) to disguise the white plastic of the fairing.

Then take out the pointy bit, and install the fairing. Keeping fingers crossed, put the bolt throught the bung, not forgetting the washer, and it should screw home perfectly.

so now i have me own bungs on the k6…fitted by mwaaa!!!..altho…the bungs i have fitted differd to the ones that you have and only needed drilling on one side…

also…i ajusted my rear sets strait after to one notch higher…and one notch back…feels lovley…!!!

arnt i the little tinker’er!!!

thanks once again to the others that awnserd my plight!!!