Go outside and look at the moon and Mars! 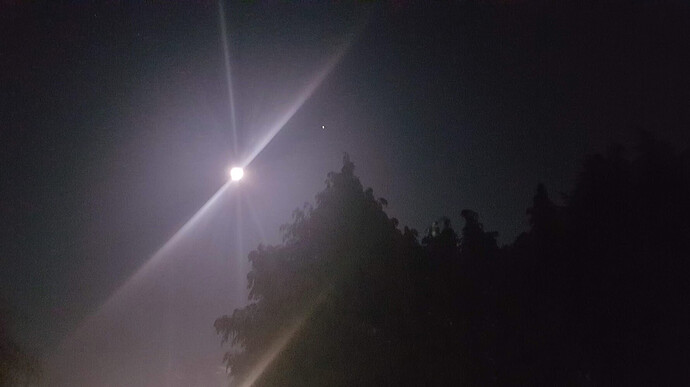 That bright star to the right of the moon, is actually Mars.

Just took the kids out thanks @Kevsta

Quite a sight, you can just see a tinge of orange/red. Not often that you can really see a planet so clearly with the naked eye.

-kids can you see the light next to the moon?
-yes
-what colour is it?
-yellow red
-so what could it be
-the sun?
#facepalm

No one would have believed, in the last years of the nineteenth century, that human affairs were being watched from the timeless worlds of space. No one could have dreamed we were being scrutinized, as someone with a microscope studies creatures that swarm and multiply in a drop of water. Few men even considered the possibility of life on other planets and yet, across the gulf of space, minds immeasurably superior to ours regarded this Earth with envious eyes, and slowly and surely, they drew their plans against us.

And they hadn’t even discovered all the planets either! And Rutherford the famous physicist stated that we know knew everything about physics. A few years later quantum physics and Einstein Theory of Gravity came along and blew everything out of the water.

Next decent sighting over London will be Friday 27th November at 6pm sharp. Appearing 27° above WSW passing overhead at 85° and disappearing 2 minutes later 70° above E. At 90 minute orbits of the Earth it ain’t hanging around!

the chances of anything coming from mars are a million to one, they said

I believe that we have found meteors that originate from both the Moon and Mars that have survived the journey to earth.

a million to one, but still they come!

Just went out and had a look. Clear as day in West London. Fantastic.

Thanks for confirming, I saw it on my walk home and thought, could that be the musk planet? I mean mars planet?