Get off your f**king phone

I would have thought he'd get pulled by plod for displaying rude words.  Rusty, what's your opinion? Aceman

What rude word, I see no rude word.......only if Mrs Miggins makes a complaint would plod have to have words.
Rusty99

Well this has been reported in the press:

I would have thought he’d get pulled by plod for displaying rude words.  Rusty, what’s your opinion?

AcemanWhat rude word, I see no rude word…only if Mrs Miggins makes a complaint would plod have to have words.

Years ago had similar sticker to one below  in vans rear window ( was already there when bought it ) … got pulled ( random stop ) and advised to cover up the offending digit . 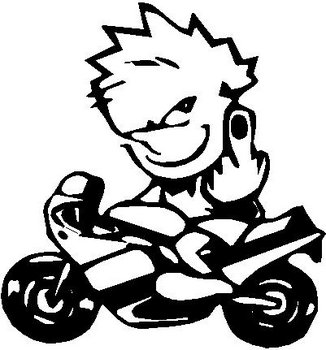 Someone made a complaint, the police are now investigating…is there a story here ?

East London 1977 a record shop had filled its entire front window with a display of album covers of the Sex Pistols latest release. The Police arrived within an hour of the display being unveiled and confiscated the display along with much of the shops stock. Rumour at the time had Mary Whitehouse involved and the local paper reported two men had been arrested and detained under the umbrella of the Obscene Publications