When turning the ignition key, there’s a rapid clicking sound that slows and stops after a few seconds. Don’t know what this is. Any thoughts?
When hitting the starter, the engine turns over but is not getting any fuel. sparks are firing ok, have bled one of the carbs and fuel is getting into them ok. only air coming out the exhaust, no fuel smell at all. no fuel smell coming from the pistons with one of the spark plugs taken out.

Immediate thought is the jets are blocked but I blew all of them through so there wasn’t any carb cleaner in it.

Can anyone shed any ideas on this?

Did you put them back together properly?

i would surggest the above post is a good start!

the clicking sound is the diaphragm in the fuel pump, nothing to worry about.

it will stop when its filled the carbs up, i can take some time to get the bike fired up after cleaning the carbs

everything seemed sound when I took it apart and cleaned it out.

I should mention I’ve put restrictor plates in the intakes (see pics). my friend is convinced this wouldn’t cause the fuel flow to stop altogether though. I wanted unbiased opinion before I mentioned this. 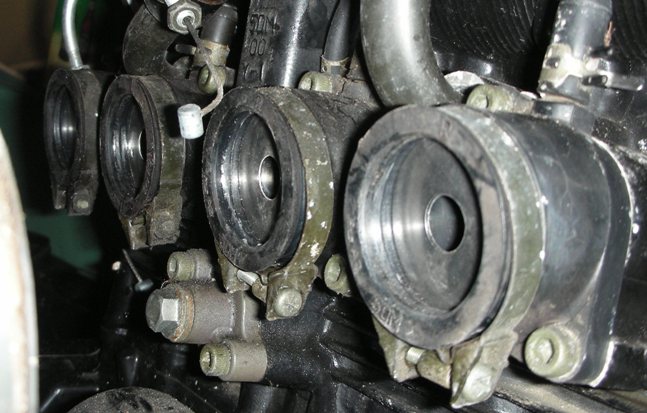 WELL, a little progress tonight. she sounded more like she wanted to fire so I put another 5l of petrol in as I thought the 1 in there before might not have been enough.

a minute or so on the starter and full choke and now she’s idling at 500rpm (on the choke) but one of the breather pipes from the carb is dripping fuel which makes me think it’s blocked maybe?
soon as I put a little pressure on the throttle she cuts out.

thanks for help so far guys.

I would take out those plates until you get it running right - then put the plates back in and adjust the carb to match.