Free BT Sport will be charged from 01/08

Concerns people who have it included for free with their BT broadband. Just got a letter from BT. Apparently, those thoughtful souls will automatically start charging you an extra £5 a month, unless you downgrade (to bt sport lite, which is free) before the 1st of August.

Spent the last 10 minutes trying to find the option to downgrade in my bt account, but either it’s simply not there or it’s just very well hidden (upgrade options are obviously plastered all over). Reread the letter… and they provide a link to type in manually where you can downgrade.
www.bt.com/give-me-lite 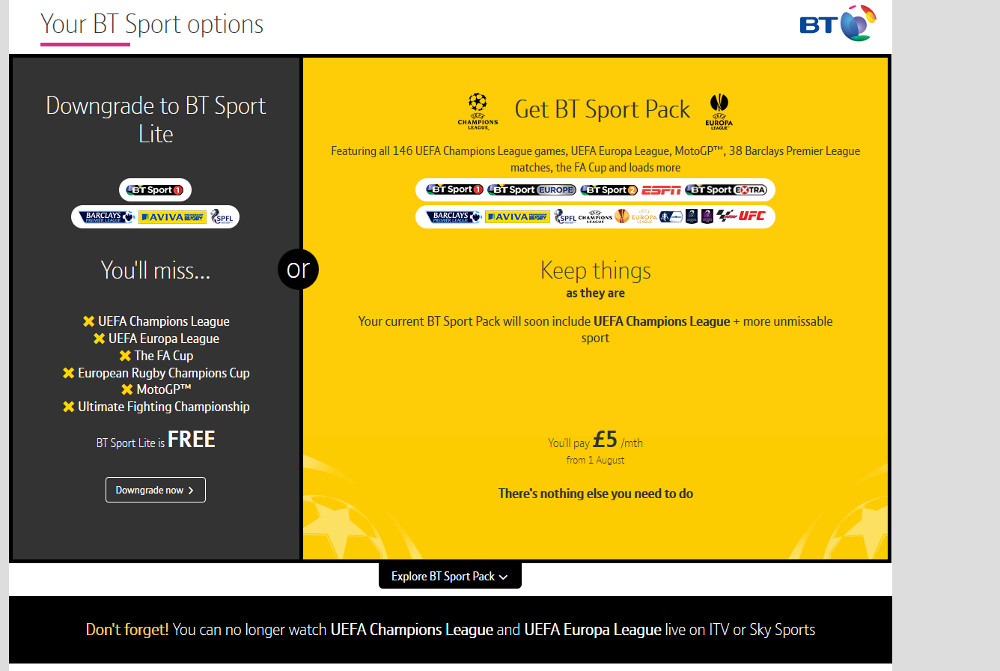 Thanks for choosing BT."

P.S. As you can see from the image, downgrading will mean you lose MotoGP.

To be fair, it’s been free since it started, they have spent an absaloute fortune on Football and MotoGP, the MotoGP coverage and the Team of Presenters is the best it has ever been since i started watching Bike Racing, when have we ever been able to watch MotoGP from Friday Practice all the way through to Sunday Race day?? so i think compared to what SKY Sports chage £5 a month is a great price.

I have to agree with Sam that £5 a month isn’t that much to pay. (Although he may be slightly biased) however it do find it a bit cheeky that it’s an opt out thing rather than an opt in thing.

lol, why on Earth would i be Biased??? ermmmmm

So that explains why Sam can afford a new bike

They have to fund the footy somehow I guess

The problem I have with it is not the price. The fact is I never asked nor wanted BT Sport. It got included automatically when I got bt broadband regardless of my wishes, but since it was free I didn’t mind. And, because I was never interested in BT sport, I normally just throw their advertisement letters related to it (which I get plenty) straight to the bin. I’m just glad I actually read this one carefully, makes me wonder if I missed any more sneaky tactics.

I’ve just found out where all your £5’s are going.

To be honest, I’m getting sick and tired of some retailers practices. Having had no end of problems recently with faulty goods from DFS, Carpetright and atrocious service from BT. Are companies only able to make a penny now by deceiving and conning consumers into parting with their hard earned. Personally, I’ve started taking and a stand. I/we all work hard for our money, I don’t see why we should put up with second rate services. Been ejected out of enough resteraunt’s now because of it. :-/

I’m sure there is enough material for a watchdog investigation there. Thieving bastards.

Watchdog are bored of investigating us!! lol

I’ve just tried taht link. It’s not as clear as I’d expect. So there is a tick box that’s automatically ticked to cost you £5 and the other option gets you to renew your contract for another 18 months. I don’t see a “Free get of jail” option.

Watchdog… ARGGHH>>>> Brings back memories when I used to work at the BBC and the Watchdog office used to be next to mine… all I could ever hear was Anne Robinson and Alice Beers B1TCHING about eachothers selection of clothes !!

All moto gp races and half of nba season + few softballs matches for £60/year? I’ll take it

To be honest they are all robbing barstewards.
I ditched sky after motogp was lost from eurosport. I now get sky sports1 for free but the sports coverage is sh1t.
It’s all money towards watching sh1tball, don’t get me wrong I like watching the odd game (my teams, Scotland/Celtic) but they very rarely show them !