Loving this year so far.

Getting really excited for tomorrows race. I think the BBC coverage is ace! Well done teambbc!

Got my overalls and helmet on already

I am looking forward to as always

Yep. For some reason I didn’t think it was going to be an exciting year, but I was so wrong.
Loving vettel’s form. That kid is so focussed and confident now.

Because he is 41, a fit 41 but the reactions aren’t quite as good. 0.3 of a second over a 1 minute 25 second lap is incomprehensable at the best of times so I don’t think he is past it yet

I was expecting Lewis to be scathed for mentiong F1 on here, as its Happened to me in the past!

I know its early days but I think Vettel will do it the this year again Redbull are pretty untouchable which is funny for a fizzy drinks manufacturer when you have some of the biggest names in vehicle manufacturing up against them but they have the best package at the moment.

I would like to see Shui do better I think its mainly down to the car and getting to grips with it things have changed a lot since he was ‘King’ when he was with Ferrari he worked 6 days a week testing the car but cant do that now Rosberg is just suited more to that car I like to see some upgrades bought to Mercedes that will benifit Shui more and its only time before that happens he was second fastest in practice this weekend and did well in quali only to **** up his lap on the last session he has a lot more to give and I think we will see it before his contract runs out.

I love it its the pinnacle of motorsport and all of a sudden Im back on the PS3 with the F1!!

Watched a bit of it the other day, was bored/confused so turned it off…

…can anyone explain WTF this DRS shit is then?

Adjustable rear wings, can only be used at certain places on the circuit and reduces the rear drag on the wing which makes the car faster so overtaking is easier… from what I believe the driver nor the teams are in control of it but its operated by race control. and think its only used on the main straights. Another attempt by Bernie Ecclestone to make racing more exciting and will probably only last for two seasons at the most.

I was expecting Lewis to be scathed for mentiong F1 on here, as its Happened to me in the past!

I dared to have a verbal go at F1 before on here and nearly got lynched!!

new rules and tyres are making it:)

It’s been pretty exciting so far I reckon, for F1. Today’s race was great but can someone explain why there was no-one in any of the grandstands?! Tad strange.

Still think formula 1 is so dull compared to Motogp, or BSB, overtaking in the pit lane, how boring! 58 laps, too long! The commentators wet themselves over a near overtake every 5 laps or so! they ought to have seen BSB at brands, thats real exciting racing!

Today’s race was great but can someone explain why there was no-one in any of the grandstands?! Tad strange.

I do watch F1 from time to time, particularly if it rains as that makes the racing a tad more amusing to watch. I get it they are top drivers but the whole ‘strategy’ thing with pitstops etc annoys me…

I’ve never understood why people think the F1 rules are complicated. Compared to the off side rules in Rugby Union they’re a piece of… .

Vettel surely is a class act and going to be the one to beat if the season so far is anything to go by.

I’m a complete addict, watch every session either live or on iplayer. As an F1 fan it’s a great season so far, as a Mclaren fan i’m kinda hoping that they do a bit better 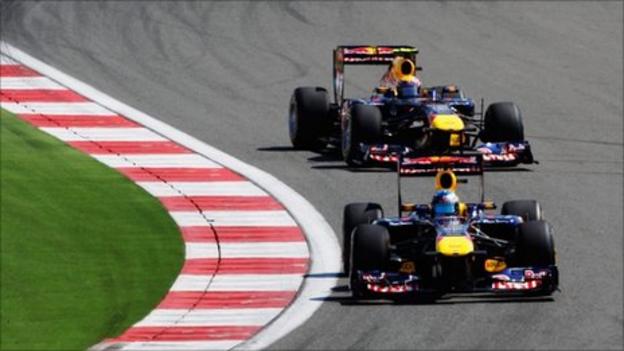 Martin Brundle debates the buzz around the new-look F1

They are flying today!

Is its Ferrari’ time this weekend??

gone off watching since MS retired, then came back but i lost interest…but monaco is monaco, if you have to watch one this is the one to watch!
big accident just got cleared, some poor newbie got smashed just off the tunnel, poor dude.

done it on the bike once, its unbelievably harsh to ride on those roads, its all hill twisties, you get the rush under that tunnel its full of racers ghosts i think!

Is its Ferrari’ time this weekend??

Nope :Dnasty accident though, shame but he’s doing ok from what i’ve read and should be back racing in a couple of weeks.