I’ve been toying with the idea of getting some soft panniers for the summer trips and pretty much settled on one of Oxford Products bits of kit at a little under £100.

Then I read “Two” magazine who seem to have the same kit as their subscription intro. offer. You pay £42 ish and get a pair of Oxford panniers worth (they say) £47.99.

Is the Oxford kit (notably the “Sprint” range) any good?

Anyone seen the stuff on special offer?

how much were they curtis?

I’ve got the Oxford Sports panniers and tail pack, which are great

Although I did lose one of the waterproof covers on a motorway.

They look like this and in terms of price - shop around… my local Hein Gericke seems to always have them on offer.

Any feed back on what “Two” magazine are offering?

My only concern with throw overs is, they seem to scratch the hell out of the side panels

I would suggest you maybe cover the panels with a good duck tape before hand.

a couple of years ago, a mate and I did 2000 miles in 4 days across Europe, I used throwovers, and they were fine.The only problems I had was that the rain covers were shredded within 200 miles :w00t: and there was a slight weaving at 100+ nothing that ever came to anything just a gentle weave, I got around the rain caps by just using black bags inside the throwovers, we covered the side panels in masking tape and that stopped any rubbing.We found the easiest way to fix the throwovers securely was to just put a cargo net over the seat, quick and secure, also a handy place for the rain suit:cool: 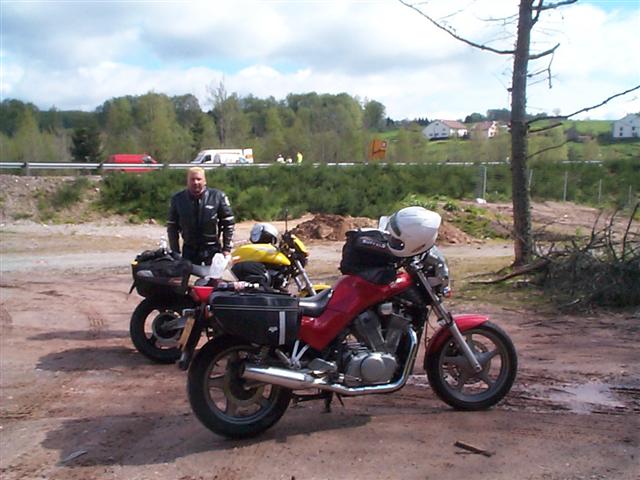 You are welcome to have these panniers from me for a cup of coffee. They are a bit dusty but hold about 22 ltrs each and have always remained on the bike @ speed ;). Be useful to give them to a good home as use hard luggage now and require the storage space in my flat!

I haven’t tried tail packs, but have got a couple of different size tank bags, the bigger one came with a tank cover which straps underneath and around the tank, so extra protection, and I did find it weird at first when full, but soon got used to it.

it’s quite comfy to rest on it too during longer journeys, just don’t fall asleep!

I have Oxford Sports Panniers and tail pack. Both are well made and sturdy. I had the weave issue at around 120, but found that if I bungied them down, then the weave went away. This was on an FJ1200. Only used the tailpack on the Sprint RS so far. They do carry lots too! I’d go with the black bags inside the luggage for proper waterproofing. Use nonslip material to protect the rear panels. Works a treat.

I have the tail pack, panniers and tank bag from the Oxford sport range and I moved from London to Italy with them! Its amazing what you can get in them, from clothes to lap tops!

I gaffered up the bike before setting off…damn good idea it turns out as when i got them off 1000miles later the springs had started to wear holes in the gaffer (fortunately not into the bike!)

I was ultra paranoid about them falling off and so used every bungee provided and had no problems at all - and i had just past my test was at best, lets say, just a little wobbly. hehehehe! :w00t:

Here’s some pics of mine fitted, the backs are velvet as not to scratch the paintwork and also comes with protective matting

Honestly. If you want to carry stuff around without looking like a bag lady, there’s one very simple solution…

Borrowed mine so free

I allways tape over my tail unit cos even though they’re rubber backed, any movement will eventually polish through your paint let alone scratch it if grit gets under 'em. The best bit of advice is to make sure you strap them solid, then you wont even know you have luggage on

Oh yeah, never rely on the waterproof covers, proper rain gets in somehow so always bag your stuff :smooooth:

O.K. so it all works and no one has said “Don’t do it”. The answer seems to be just get something and see how it works?

(Some weave on the steering is going to happen. A lot of added drag and a bit of weight on the back will always unsettle the front end. How bad and at what speed are the problems.)

I would suggest you maybe cover the panels with a good duck tape before hand.

Be careful. The bonding agent in some types of gaffa tape can effectively melt your paintwork to it’s self if left on long enough…