fireblade with a goldwing engine

nobody would do that, i think he just painted his goldwing to look like an r1

As above thats all kinds of wrong

But its not a yamaha!

nobody would do that, i think he just painted his goldwing to look like an r1

I would actually like to see it corner…or try to…

what a waste of monies

Saw a few extended racers in Florida this year…pmsl when they tried to park.

and someone would waste a lot of time and money doing that because?..

i wonder what it would top out at ?

Standard trim Goldwings were good for about 110-120 mph, don’t see why that effort should be too much quicker.

Some one has put ALOT of effort into this … The reasons though have definitely escaped me !!

Im not one for jumping on the test ride thing or trying mates bike but this i would deffo wanna ride. 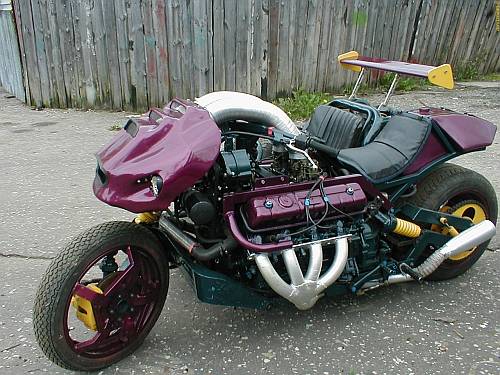 wtf that is just wrong so wrong

purple’s not that bad