thank God for that 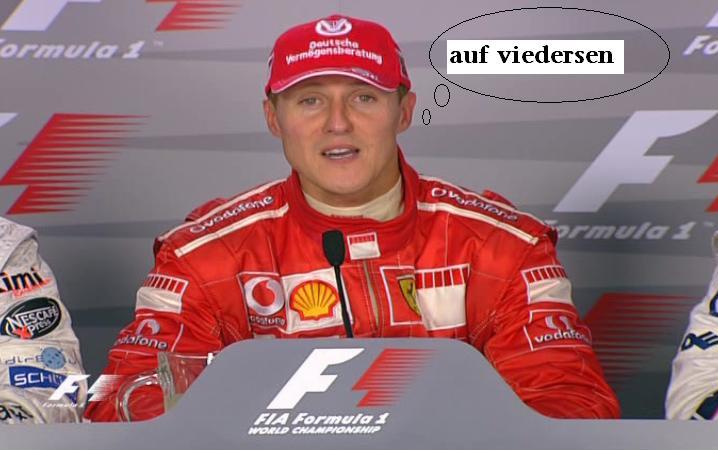 Have I missed something?!

,dont get me wrong,good driver,but… a complete twat if ya ask me

Finally I can return to support Ferrari again. (specially now Kimi is driving for them)

Schuey is Da Guy I know he had to go sometime but im still sorry to see him leave, he is the main reason the sport was so widely watched and then when he got to the point where he could not be beaten and became a big part of why F1 lost so many viewers, Kind of like Rossi is/will end up doing.

We all wanted people like Rossi and Schuey to be the best at one point we just never knew they would be the best greatest of all time, for me Schuey takes his place amongst the greats: Arten Senna, Rossi, Michael Jordon, Mohammed Ali, Da Artist

His sportsmanship is left to be desired, I’ll never forgive him for the way he behaved on track with the following drivers:

not to mention the way he’s always shat on his own team mates such as Rubens Barrichello, Eddie Irvine, Mika Salo and many others.

Just to give you an example Flavio Briatore who was the man who “discovered” him back in 1991 in the Benetton team today was interviewed by Martin Brundle and asked if F1 will miss Michael Schumacher, his reply was “we won’t miss him at all” shrugging his shoulders in disgust, that just about sums up the way people feel about this much hated “Champion”.

As far as I am concerned if Senna was still alive today, he would have got more records that Schumacher ever would have had. Senna was a people’s champion Schumacher on the other hand is a ruthless bloke who would cut everyone’s legs to get to where he is now. And how dare people compares him to Rossi? Don’t get me started…

Rossi is a gent both on and off track.

Ruthlessness is what it took so its what he gave or he could have been a total gentleman like David Coltard and not won anything worth sh!t in 13yrs

You are right though he is better than Mr Rossi

you gotta have ruthlessness to get ahead in any sport. It’s not what he’ll be remembered for though.

He was genuinely the greatest driver to have sat in an F1 car. He has a couple of likely lads to succeed him though. You have to fancy Alonso to be at the top of the game for years to come, having gone so far so quickly. The way he often rallied from the back of the grid to sit on the podium, or handled the rain when no-one else could turn corners.

He could be said to have made the sport dull and predictable though, which is never good, especially after watching the closing laps of the MotoGP beforehand yesterday.

Raikonnen is a bit “Couthardesque”, buckets of promise but ultimately will probably be outshone.

Sorry for the mispell, I am not german (fooking gladly and all!!) so I couldn’t give a flying FLICK he’s history now.