With a full blueflame system.

And so much more!

Speed triple, with the arrow race exhaust, liked it so much I even booked a test ride

Second vote for the red and white Blade. Ooh it’s got gold wheels!

It was the only bike at the show that really made me go ‘want one’, and I don’t even like Hondas.

I’ll reserve judgment till Thursday, when I go.

Having not had the pleasure apart from the fantastic gallery … my choice is the Kawasaki and Devitt Girls !

Ok ok, the new Blade does it for me !

but i liked the 650 more than the 1200 - but for reality sake I quite liked the new Tiger, and loved the CBF1000 but neither of those are really new…

did u see the girl on the victory stand very nice 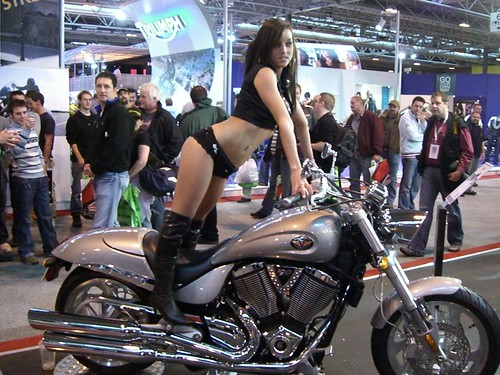 O…Kay…so whats wrong with her ELBOWS?? funny shape? doublejointed? Guess the guys are not actually THAT bothered that she has disfigured elbows?..cos they seem to be looking a tad lower???

She was sweet and like me, has double jointed elbows. That fact didn’t impress tho, oddly enough.

Westie, get a (heated) grip man, those BM’s are ugly and pointless (opinion dear reader, opinion). Go gawp at the choppers on Carole Nash stand

I go this Saturday and I shall not leave the orange ZX6 alone!