I’ve cracked the front fairing on my 2004 CBR600RR after coming off. If I buy a new nose, does anyone know who would be able to copy the paint job on the current one if I bring them both? It’s a custom Repsol paintjob (the old blue rather than black). 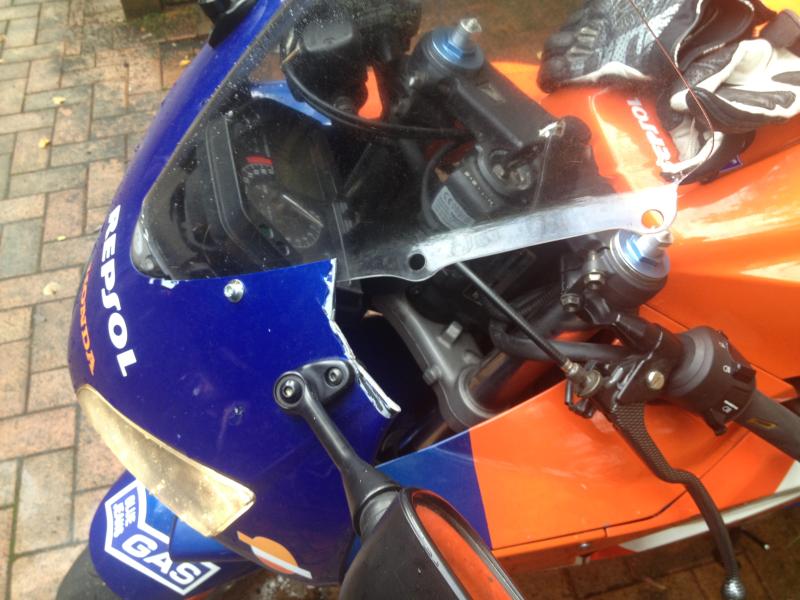 What part of London are you in? Most body shops should be able to colour match…

Just south the river but I’m fine travelling if someone will definitely have the colours to hand when I rock up with an unpainted fairing.

Just get that one repaired bud,
2004 isn’t exactly a young bike, although its not that old.

It won’t be worth spending money on a new nose cone+colour matching+painting+stickers…
Do you have the broken bit of plastic?
If so just fibre glass it back then get it matched in,

If not, buy a really cheap used panel cut the shape accordingly and fibreglass it on, then get it matched up.

You’ll never make your money back on the bike so no point waisting it on it.

As Daws said. Much cheaper to repair it. I plastic welded mine back together with a solder iron. Then sand the ****** down. Then either spray it yourself or get it done professionaly depending on how good you want it looking.

But genuine it be spot on

But genuine it be spot on

What is the point in buying a “genuine” replacement panel, the bike is 8years old (im guessing its not immaculate) so it will look stupid with a BN nose cone, plus it’ll probably cost a few hundred, and hel never make the money back if he come to sell it.

Just patch it up mate, if your no good or not confident at DIY send me a pm and il give ya a hand…

Just don’t throw ya money away.

Hmmm bodge job on my pride and joy I think not

Each to their own

Hmmm bodge job on my pride and joy I think not

Each to their own

You can’t just go and spend 100s on a bike you know you’ll never make back,

Unless your bike is immaculate, well looked after and worth the money…

Also what makes it a “bodge job” or is it the fact you have a repaired panel on your bike?

Get that stick out of your ar$e

Like I said each to their own but being me and a lot of people on here after dropping a bike I’d rather have to back to how it was and not have a broken repaired fairing at wont look good.

Well then yes. Each too their own.
If your bike has mileage that high I wouldn’t bother but hey…

And what’s to say a repaired fairing won’t look good? I suppose it helps if you know what your doing, but its no reason to waste aloud of cash

P.s
No stick up my arse bud, just stating my opinion.

A bit of time and patience and you’ll get the fairing looking as good as new.

A bit of time and patience and you’ll get the fairing looking as good as new.

And cheap as chips!

Would have been cheap as chips if only I had all the right tools. But still cheaper than gen parts. But at least I have everything I’d need if I were to damage my fairings again

Or for a friend or fellow LB’r…

Saves spunking money up the wall.