I’m taking the rear pegs off my bike this weekend as I do not intend to be taking any pillions. However, it was my rear pegs that saved my exhausts on my little slip recently.

Now, I don’t intend to go sliding down the road again, but just in case I want to see if there is anything I can put on the bike to protect the exhausts should it happen again.

Anyone know of anything?

Forgive my ignorance, but why would you need to take the rear pegs off because your not using them? Maybe just leave them on for this very reason?

Thanks, I’ll see if I can find any reviews/thoughts on them. DP - they are not required and I don’t want them. Hence why I’m trying to find alternative protection.

Hanna…cheaper solution (which I have personally tested

(Can’t remember the exact diameter, just measured the exhaust and went down to the local motor factors) 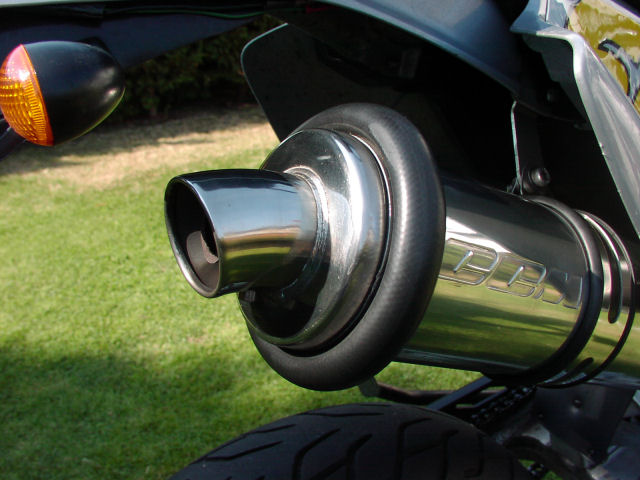 i use the can as a crash protector, id rather the end can gets trashed than the swing arm, rear fairings and subframes etc take the brunt of the damage. then again, its only a stock can… may think differently if i had a set of termis

I use a R&G protector:D

Its very secure and would not roll off or move if the bike got laid down (I wouldn’t wanna test it though:D)

Also, i got rear swing arm bobbins / front fork bobbins, which protect the swing arm/forks if the bike got laid down (these have been tested :D)

The moto guys all seem to have the R&G c#ck rings :w00t: ones on there exhausts - http://www.rg-racing.com/browseBike/Triumph/Speed_Triple/2008/EP0005BK.aspx

and a few of them have probably gone down the road at some point, so would ask them if they work!!! Agree with the comment though that I’d rather the exahust takes a beating as opposed to swing arm etc, just make sure you have bar end, crash bungs and maybe a engine case slider as well if your looking to protect the bike.

Oh and in my experience if you end up flipping the bike over the bungs don’t even get a scratch on them!!