So I am blasting around the roads around St Albans today (I left when England went 3-1 down, they were 4-1 down by the time I got on the bike :crazy:) when the back end goes clunk.

I easy off the throttle and I am losing control rapidly as the tyre goes dead flat.
Somehow manage to stay on and find a 4-inch bolt has gone through the tyre and come out of the sidewall.

I’m gonna post some pic to share with you guys, let me know what you make of it… 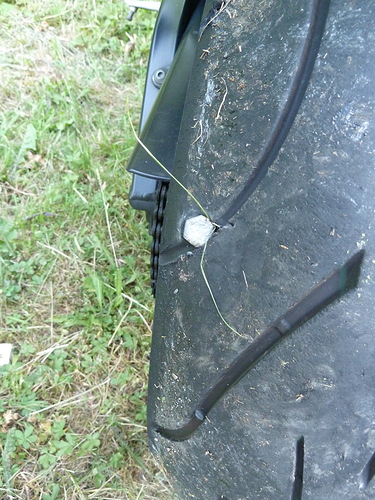 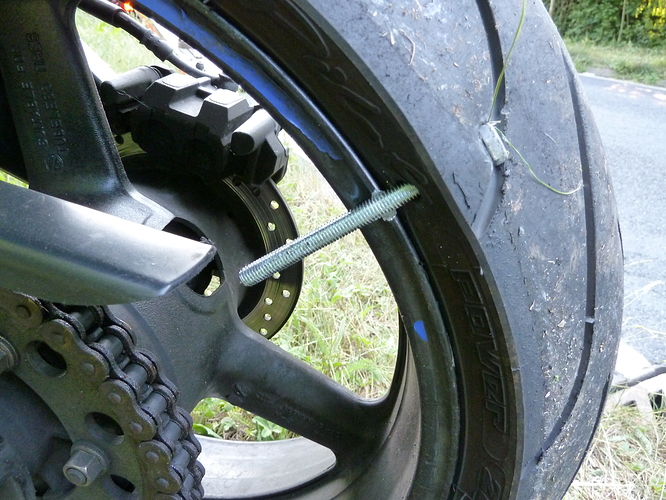 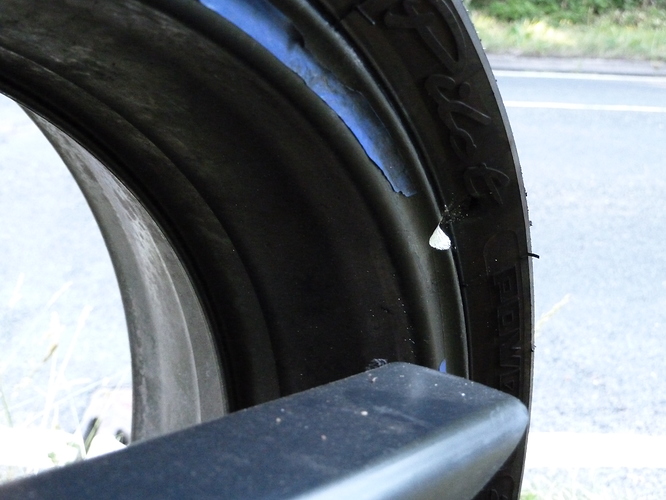 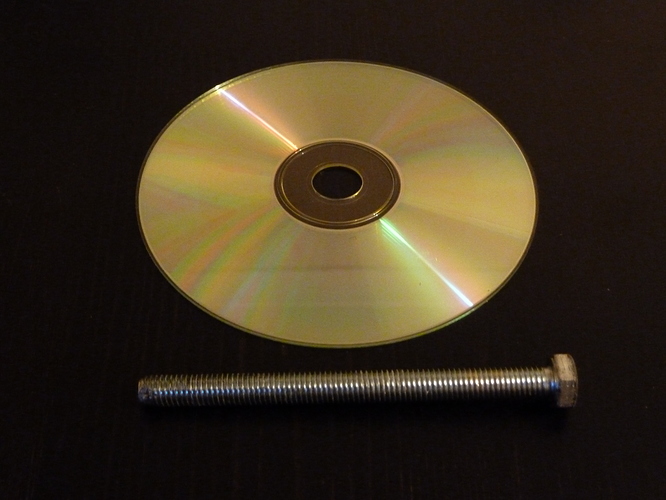 yup thats a puncture that is :w00t: new tyre and skivvies time

it doesn’t look good for the wheel either :w00t:

Man that is pretty mental.

Holy crap - largest bolt in a tyre I’ve ever seen - and through the sidewall as well.

Taken a chunk out the wheel rim too.

I had a large bolt write off a new rear tyre after only 200 miles once. It totally sucks.

Ouch, i bet that hurt! it must have hurt even more to see a chunk taken out from the rim!:w00t: The size of the bolt is unbelieveable! this needs to be passed on to “Ripleys Believe it or not”

Pilot Power - just my experience, but they seem to go hunting for stuff to puncture them…had 2 sets and 4 punctures before I changed to Pilot Roads

Had a larger nail than that do the exact same thing last month on a newish dunlop, only did 1500 miles so was gutted.

I had about 500 miles on that tyre, gutted!
Well spotted Alex, it the 2CT and I really like the feedback it gives.

I’m going to get another rim but does anyone recommend a specialist who can repair it?
My first shout is “Chips Away” but I dunno if they will look at bike rims, I’ll find out tomorrow morning.

I have “free” breakdown with MCE but it is only local roadside recovery - I was 15miles from home and they would only take me 10miles because my free cover didn’t cover me for any more … how much to make up for the 5miles you ask? … £100. I told them where to go and 118’d a local guy to help me out for £80. I’ll be signing up for the LB breakdown cover once I have some money after this whole fiasco is paid for.

On the bright side, at least I didn’t bin it … that would’ve been very expensive.

Thanks for the warm wishes guys, appreciate them all. 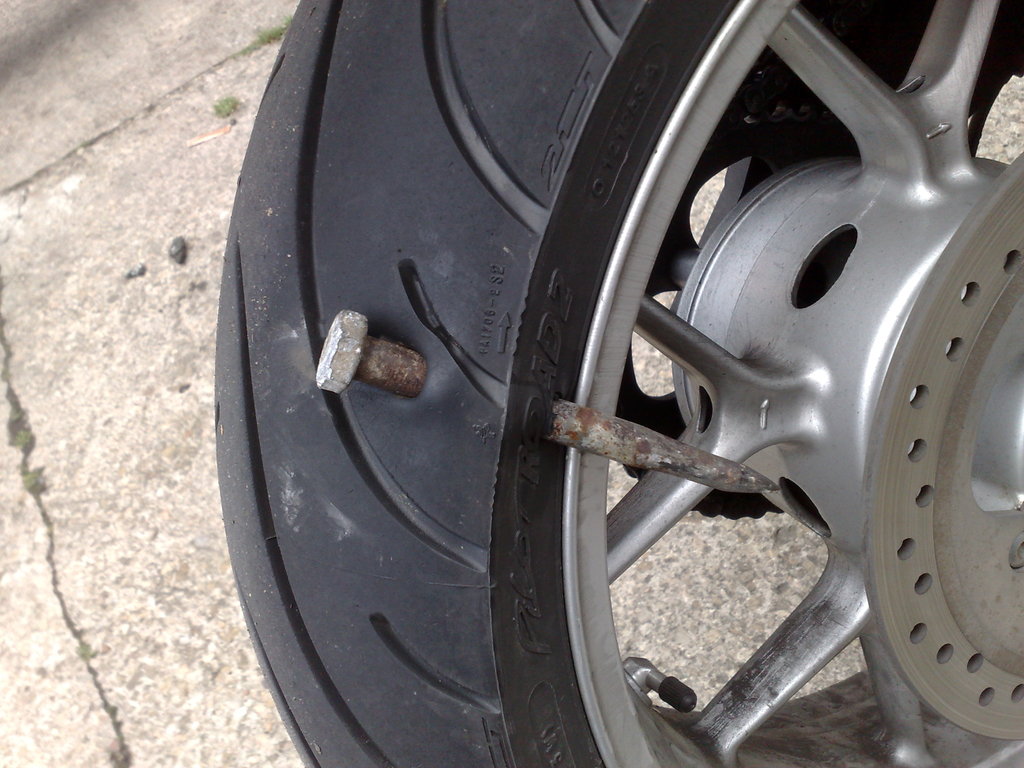 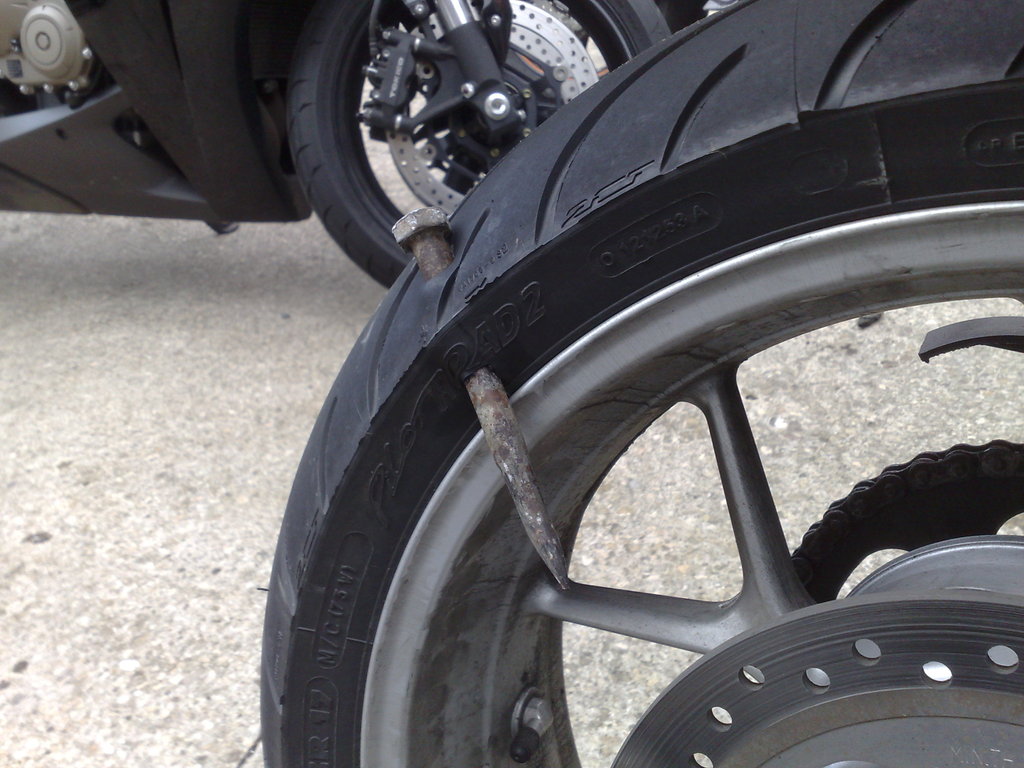 That looks similar to mine … but no wheel damage by the looks of it. Scary what is laying about on our roads.

I’m up late bidding on a replacement wheel :doze: what a day :rolleyes:

lol, if only it were that easy mad-dog.

Just won a replacement wheel with tyre and disc. I’ll have to swap the cush drives and sprocket over from my rim but not bad for £41. Time to test the Abba stands credentials (and my own).

looks like the kind of stake used to kill vampires! :w00t:

damn!! good job on staying on the bike! :crazy: