At slower engine speeds, 3-4k revs (my bike only revs to 9 ish) everything is fine, all’s well and we pootle, indicate and display lights happilly.

Above that and the electrical system loses power progressively, until the indicators are either a constant dull glow, or off altogether, the horn doesn’t work, the headlamp is all but off and lord only know’s what’s happening to the red one on the back.

Once the engine speed is back below about 4k everything lights up fine, and it’s like Christmas in woolworths.

Last night was particuarly dangerous as it all went black on the unlit section of the A3, and I had to pull over for 10mins, wondering what the c*ck to do, before noticing that I’d pulled over at the start of the lit section into London and the speed limit had dropped to 50mph 100yds ahead, allowing me a slow engine speed in a high gear.

Anyway, around town it’s fine, but i’ll be avoiding long runs as the evenings draw in.

I have absolutley no idea what the problem is though. Any clever electrically minded people out there?

If the alternator bushes are worn, then they could be losing contact and hence losing the ability to generate a charge.

I thought that initially, though it’s going from Bright to Dim at revs, and not the other way around.

If it’s got go-go juice in it, and is mechanical, then I understand it. Electrical witchcraft baffles me though.

The closer you get to the speed of light the less far forward the headlamp is going to be able to project light, so you just need to slow down a bit ! Simple innit ?

Seriously, I’d go with the reg/rectifier & alternator, should be easy to check if you’ve got the manual, if not, then it’s got to be pretty similar if not the same as the XT, so you should be able to find it on the web someplace.

what are these things of which you speak?

is that a bargain? The only manual I have is in French, which is a pain.

is it on one of these pages? 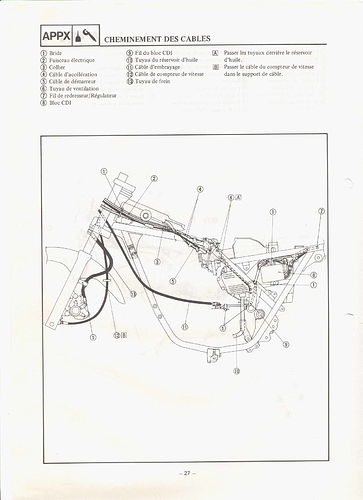 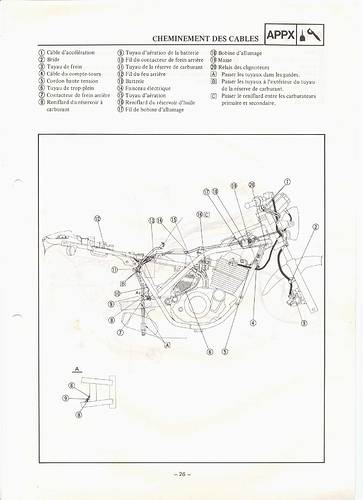 Try testing it when the bike is stationary and rev the engine to the different rev levels. Get a multimeter on the batter while doing this and watch the voltage levels. It should stay at around 13.5-14.5 volts and may go up and down a little but will generally be constant.

My prediction would be that at higher rev the voltage drops to <12. The rectifier (my understanding) converts the AC that the alternator puts out to DC. So unlikely thats the root of the problem. Id put my money on the alternator. It could even just be bad causing excess charge to be dispated at higher speeds/revs. wiring so check the integrity of all the connections.

there’s a website that seems to indicate that I have a generator, not an alternator, and should get it recon’d as they don’t sell replacements.

I spoke to a nice guy who’s name I didn’t catch, who sounded very old and learned about the old bike electrics thing.

He said there’s no obvious diagnosis, and that it would be best to replace the generator and reg/rec. I comes to about £150 for parts alone, are these bits I could fit myself, bolt on bolt off etc?

they potentially can be unlesss u obv get recondition…

A generator??? Thats something that used fuel to turn a turbine to create electricty…Never heard of one in a car or a bike but im prob wrong.

An alternator will usually use the spining of something connected to the engine to ‘generate’ electricity. Get a multimeter regardless only a fiver for one and will come in use in a whole loads of places…

you can get alternators reconditioned, as long as you drop your old one in, they can offer discount.

If the bushes are worn (the bits that make contact with the spinning shaft) then as rpm increases, they could be bouncing up and down off the spindle, which would result in a broken circuit and arcing to the shaft, this arcing will also damage the shaft, making the problem worse.

Then your bike will blow up in a ball of flames

(ok, guess which bit i made up

Bushes, bouncing up and down, shafts…!

I think you made the bit about the alternator up

I think this is what i’ll be doing. met a guy at Cubana last night who said he’d show me how to fit it all, although, as my memory is dire, I can’t remember his name!

Have you gone round all your electrical contacts with wet & dry paper cleaning all possible corrosion off and spraying WD40 in all conntector blocks. Earth connections are especially prone to giving annoying/intermittent problems on bikes and cars. Is the problem the same in all weathers ??

It’s finally fixed now, took me all of Sunday afternoon dodging raindrops but Finally went through the whole electrickery on the bike and systematically rewired a lot of it, replaced the battery and the reggy/rec.

I have lights again!