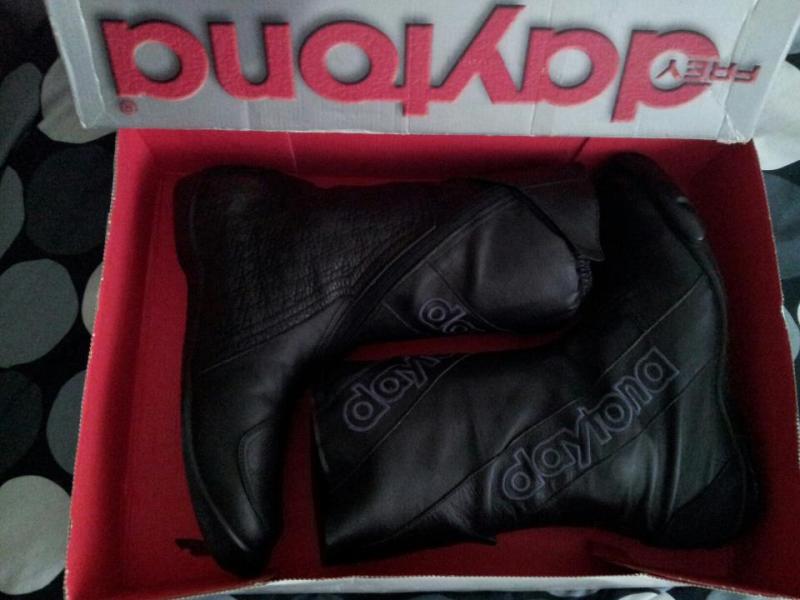 How come they’re so costly? Just nicely made?

They are the best boots on the market for safety. The inner boot is Kevlar and has so much protection around the ankle that it would be very hard to damage the bones if involved in an accident whilet wearing them.

They are the boots of choice by many top racers that have to pay for their own equipment, those that don’t wear them are sponsored by other brands:)

Yeah I’ve been reading up on them…

The Daytona boots always seem to look like they’re a bit flimsy and loose fitting. Obviously looks are deceiving!

I’ve bought them to upgrade my older pair they have size 43 (9) inners but they come up tight on my feet. I had new outters but they’re the black / red / white colours, my leathers are black / yellow / white so these will (for vanity) blend in better. If I sell my old ones on they won’t be to expensive.

If they had been bigger I would have had them .

If they had been slightly bigger I would have kept them :laugh:

They seem to be the dogs bollox in foot and ankle protection… Wish I could afford some!

I think I saw some survey somewhere that said 80% of motorcycle injuries are below the knee…? I could be wrong though

If it wasn’t for sponsorship deals, every racer would wear Daytonas

Got a pair for the road and saving up for these for track duties.

I even like the garish 80s colour styles they use on some of their boots.

You can get them at seriously reduced price from this shop based in Germany (where they’re made).