I have had a lot of phone calls over the lock down regarding cbts, renewals and bike tests so I thought I would post here as it may help someone.

We can now do cbts for all with strict guidelines in place if you require a cbt to “travel to and from work avoiding public transport”.
Originally we were only allowed todo cbts for key workers this has now been relaxed.
I am aware of some schools charging very high prices for cbts during these troubled times I can only suggest vote with your feet but please bare in mind running a cbt/bike school is expensive and cbts can only be done currently with a 2 to 1 ratio instead of the normal 4 to 1 ratio so expect to pay a bit more but not double.
And before any one goes jumping on the ratio limits in normal times 4 to 1 was allowed on parts of the cbt with 2 to 1 on other parts. Its strictly 2 to 1 start to finish at the moment.

I have also had people call me explaining after just a couple of hours of not very good instruction they were tolled they were crap and sent home by their training school and tolled to rebook and pay again. That’s not good practise are they just after more money ? Those cheap cbt online deals ain’t so cheap when they do that to you.

Now we come onto normal bike courses and tests. Well there isnt any to speak of. We can only teach key workers at the moment the dvsa is meant to supply special key worker only tests but so far everyone weve trained who has applied for their key worker test has been tolled there arnt any which is crap because iv been in touch with an examiner who has voluntered todo them. The system in place just doesn’t work.

With this in mind I have informed the other key workers who I had booked in for courses that with no possibility of getting a test from the dvsa I wasnt prepared to train them as it isnt fair on them paying for training and having no chance of getting a test so best to wait until things get back to some sort of normal.

And finally to be clear I am not currently doing cbts or normal courses it’s not financially viable to do either at the moment . A mate of mine is running proper cbt training courses following all the strict regulations currently in place if you or any one you know needs one drop me a message. He is charging his normal pre covid rate.

Thanks for the update Dave

Thank you for posting that Dave.

Where are you based? What is your website or direct contact details please? I may have some new business for you.

I’m in south east london, Bromley to be exact

Hope you get back out there soon Dave. Good to know on the theory, need to book the wife on for hers.

What is ridiculous here, is she applied for her provisional 4 days ago and it’s here, but now she can’t do Jack with it lol

Thanks sleeper, nope she cant do a thing regarding rider or driver training even car driving instructors are limited to teaching key workers only but I know a few round my way just teaching any one that will put on a face mask and pay them.

There are also no plans to extend peoples theory certificates either as far as I am aware so if yours is short or run out and you did you mod1 but not mod 2 once its run out you need todo it all again.
Theory
Mod1

My son has todo his car theory again it ran out last week his car test was cancelled 1st week of march.

Latest update ERM there isn’t one just the usual government drivel yap yap yap but be warned the theory booking web site has been opened once you have booked and paid for your test the american company who run it send you an email a week later saying its be postponed until further notice but don’t give you your money back.

My daughter had her car theory cancelled and got a refund. She then then rebooked when system reopened. Like you say that test was then also cancelled and they kept the money this time but a couple of days later she got an email with a new test date exactly one month later and does not have to pay again.

Yep all original tests booked before covid were cancelled and refunded those booked since the shut down when the booking system reopened are routinely being cancelled the week before and moved with no refund option.

If she is lucky enuff to take hers come back and update here.

Latest update from the dvsa

Normal riding and driving lessons can begin from the 4th july, you can start to book tests on the 6th but tests wont start until the 13th with a phased in approach

Have you got a back log to get through or have a lot people cancelled?

That’s some good news, yep I understand some people putting it off. Others will I suppose will be looking at alternatives to public transport.

The rebooked one went ahead and she passed. Now just the practical to deal with.

Nice one.
Iv just had my 2 pass their mod1s this week they have been waiting since lock down todo it

It’s been a busy August but I’m pleased to say all my students have passed mod1 and mod2. The examiners are working under very strict conditions but I am lucky to have decent examiners at the test centres I use.

Iv got my last couple of students who have been waiting since lockdown to take mod2s this week and next.

Tests are like gold bricks, impossible to get hold of.
I’m now booking for late september/october due to the back log at test centres. It even made it on the news.

Saw someone trying to book a car test, the screenshot they posted showed 150’000 people a head of them in the queue.

Yup I tried to book a car test on Tuesday. 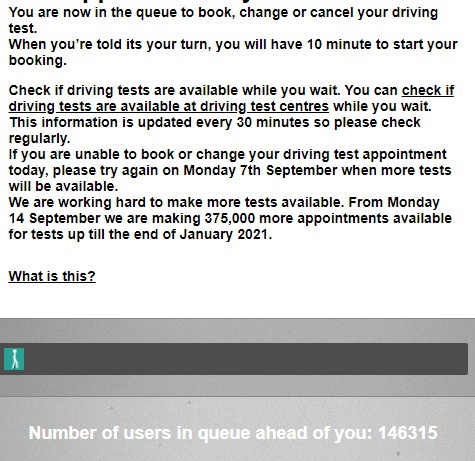