It was bound to happen, eh? My 10th trackday today at Rockingham and I’ve binned it, big time. Coming into a right hand, decked over, opened the throttle… BANG… highside.

If you’re here for the gory video, then here you go:
http://www.damons.dsl.pipex.com/crash.mpg (17mb)

I can’t remember anything about what happened. In fact, I can’t remember much of the weekend. Someone bought my ZX6R yesterday (apparently! Jeanette tells me so, and I have a bankers draft

) and I can’t remember a thing about it! Can’t remember getting up this morning, or getting to the track. I don’t remember anything after the crash, except being in hospital. Big thumbs up to Arai, Dainese and Alpinestars - the kit stopped me being a lot worse off I’m sure. As it is, I have some amnesia and I ache but nothing more than that.

I’ll post some pics of the bike and my kit when I get my **** together. My helmet’s written off, but not as badly as you might expect. The leathers have frayed but did their job well. One of the toesliders on my boots is loose, but otherwise their fine. The bike (from what I can remember, which isn’t a lot) has scratches on the fairing, a worn engine casing, snapped gear change, snapped brake lever and various other scuffs and marks. The mount for the crash bungs has bent so the left hand bung is sitting at a funny angle (and is worn down). R&G Swingarm protector worked a treat and took a kicking!

I got away fairly lightly. Aside from the memory loss, which it seems is not just confined to today, my back and my ankle hurt. I’ve got a few abrasions on my shoulder but physically that’s it.

Sorry to hear the bad news. Glad your ok and hope you get your memory back soon.

but nice to hear you are ok

Sorry to hear about that Silver! Been there and know the feeling… Never came down as hard as you did though… Hope you get back to track soon

Geez mate, glad you escaped with such minor damage. Get well soon.

as a fellow recient crashee, glad you’re relatively okay, I’ve got a crap memory anyway and I manage ok

Here’s a couple of pictures of my kit. Needless to say I ache like **** this morning, but I’m still impressed with how the kit held up. Hardly a scratch on my Alpinestars gloves and boots 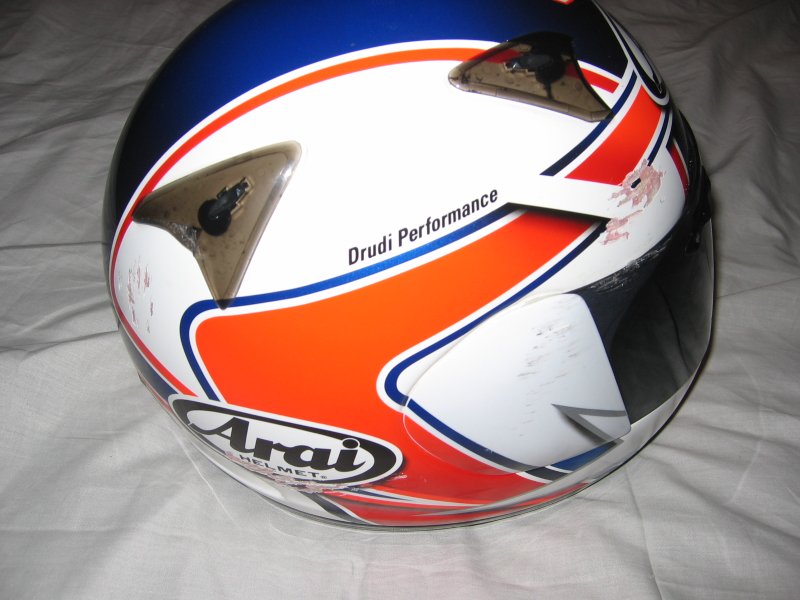 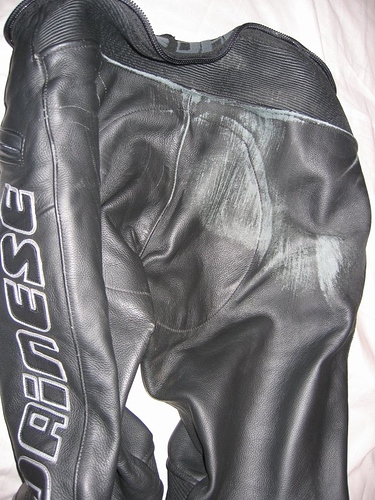 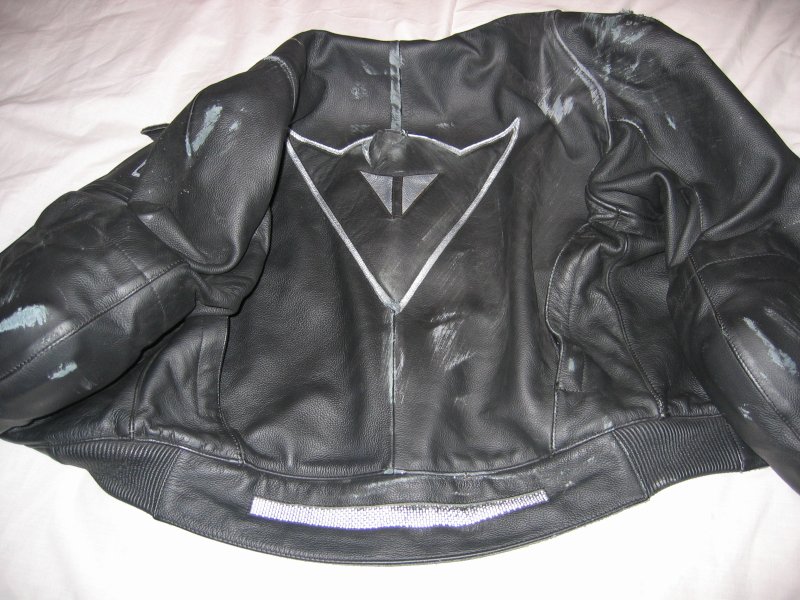 HI HO Silver… Sorry to hear about your rash!!! oh… and Crash!!! Hope you didn’t forget about that!!! Only jokin mate…
Here’s wishing you a speedy recovery…

Whoops! Sounds like both bike and rider got off lightly! The memory will right itself no doubt, but you’re bloody lucky not to have broken anything, or to have written the bike off. Highsides can wreck bikes, as seen recently with a post about a K5 Corona rep that was totalled at Donnington. Best of luck healing fella, and keep us informed of repairs! (got any pics of the bike?)

Just hobbled outside (my ankle really bloody hurts now!) and surveyed the damage. I am sooooo lucky…

Basically I’m lucky because although I highsided, the bike landed on one side and slid. Obviously what normally happens is that the bike flips too. If the bike had turned over it’d have been much worse. Also, the crash protectors at the front and rear took most of the damage from sliding. One thing that amazed me is that the footpeg is fine - even the hero blob is still intact. 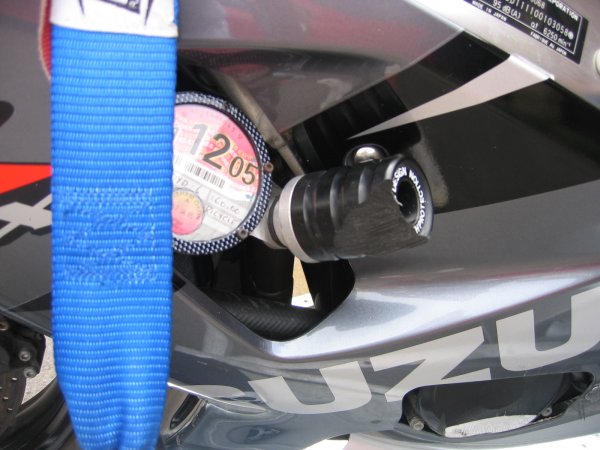 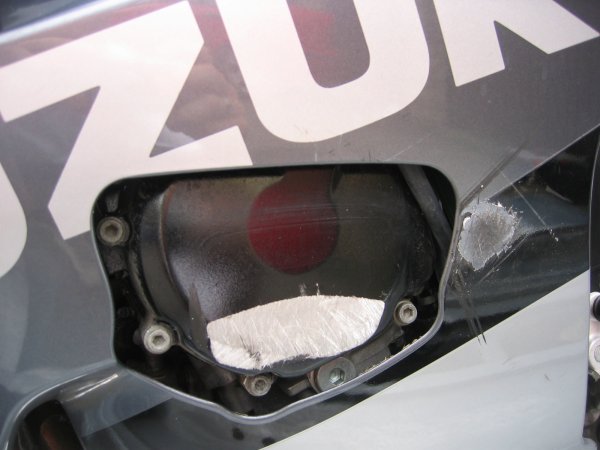 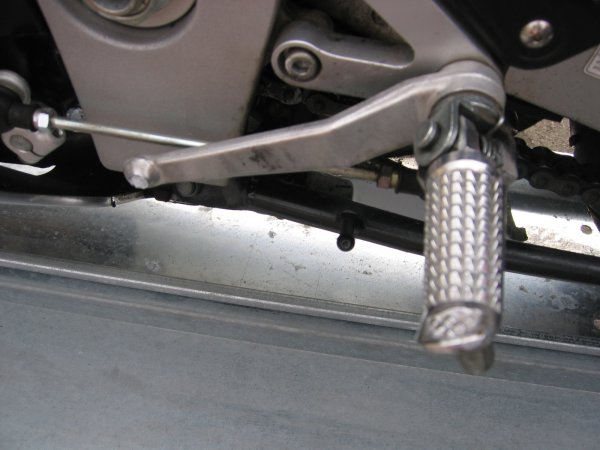 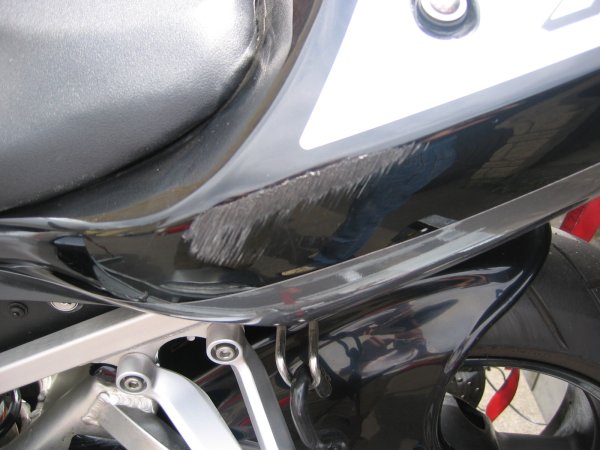 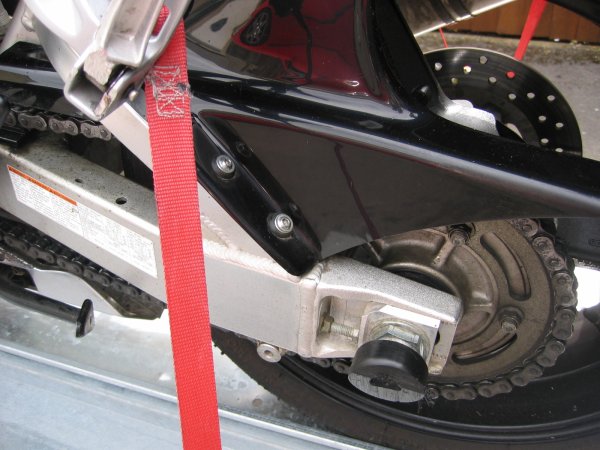 Glad your ok, from the look of it all you need is a gear change to get back out on it.

Yep, you were lucky! Nice pictures. Whilst you could repaint the engine cover, I wouldn’t recommend it, as you’ve lost some of the width of the cover, which means if it hits the deck again, it stands a very good chance of smashing into a hundred pieces, or just wearing down until it’s open. Either way, you’d lose your oil and be out for the count.

I would take the opportunity to replace the thin stock item with an armoured version. I have had very good experience with NRC engine covers, though there’s alternatives such as Woodcraft and Yoshimura (who make a VERY sexy magnesium cover for your bike, which weighs NOTHING, and is incredibly trick looking). Cost for all those options is around the £120 mark, or cheaper, the same price as a replacement O.E.M unit.

The other repairs look very simple, you were indeed very lucky the bike just slid, rather than flipping. All the best in getting it sorted, keep us informed!

Jay, I’m definitely going to put something over it. I’ve been thinking about it today. I saw an R6 at Donington that had come from the gravel and was in a similar state to mine… except the engine casing had been ripped off and it was pissing oil everywhere.

The ordering of parts begins tomorrow. My bank manager will love me! In the meantime, I’ve sent to emails to equipment manufacturers letting them know how well their stuff faired, together with footage etc. A couple of freebies in return wouldn’t go amiss…

I also took the opportunity to look at the video frame by frame. Hadn’t realised I’d done a Superman! I’ve attached a series of stills. 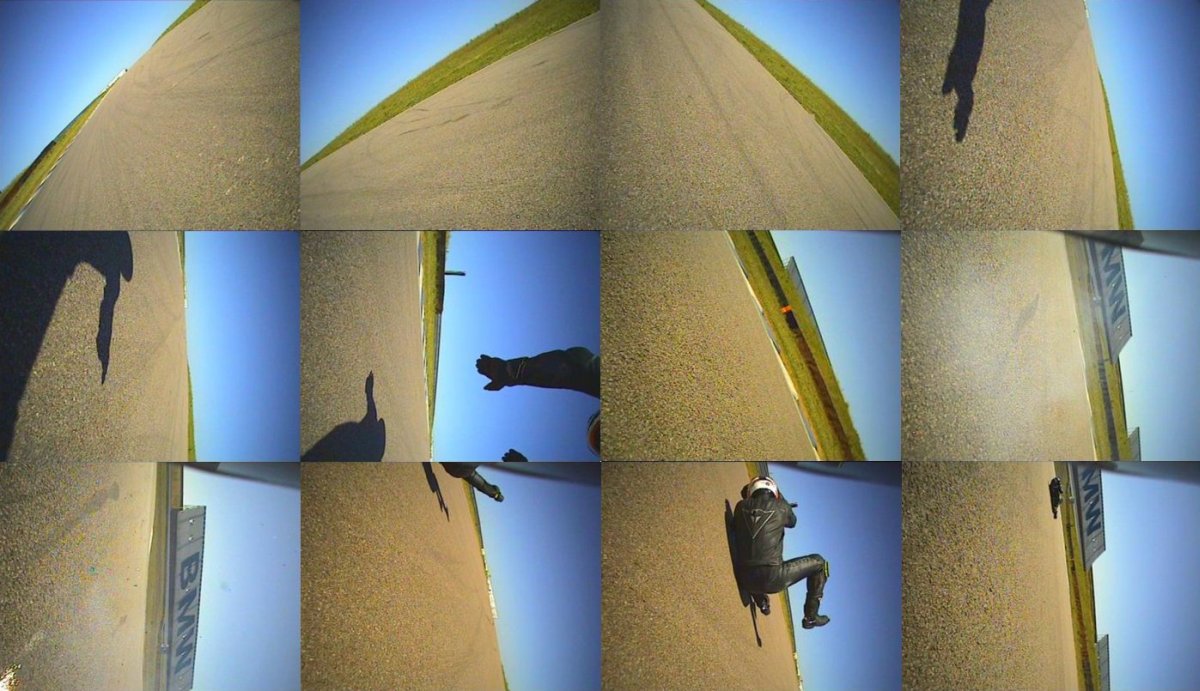 Nice stills! The carbon covers you get for engine covers are no good, they wear through quite easily. I know this from first-hand experience. 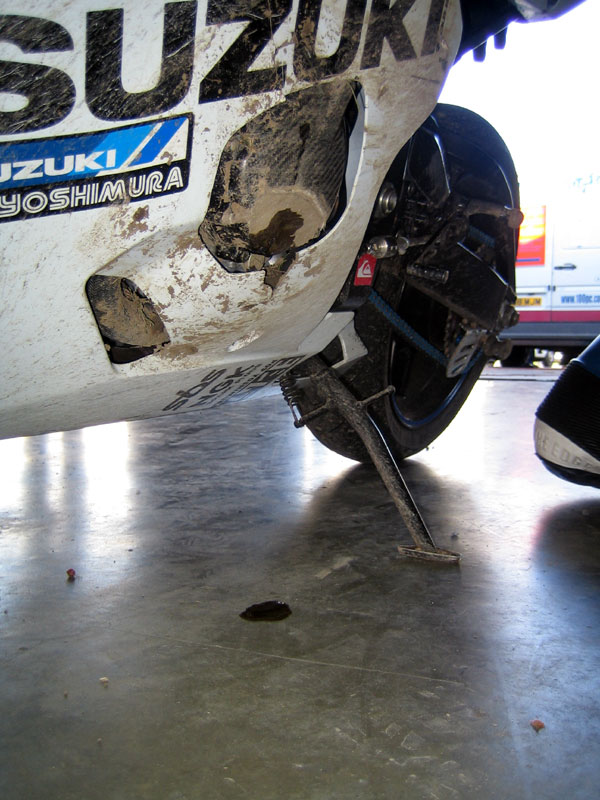 But if you can take it off and replace it with another (at about £40) then surely it’s done its job? Or does it wear through completely and still knacker the engine casing?

How much are the NRC ones? About £150 I seem to remember? Surely if they took a kicking they’d need replacing after a crash too?

They wear through, and so does the engine casing, as seen in the picture posted above, where the engine-oil is leaking onto the floor. The NRC engine case cost me £100, if I remember correctly. Speak to BikeHPS, or maybe Southern Cross Motorcycles.

Here’s something else to bear in mind. I just looked back on the video, and it’s a bit difficult to be exact because of the angle but…

Less than 90 seconds after the crash I was in the back of an ambulance.

Now, this year I’ve done five trackdays (one a month through the reasonable/good weather) and because of this I don’t go out on my bike (on the road) just to go fast. I don’t ride as fast on the road. Although I’ve crashed, I have done it safely (ish), in the best environment for it to happen. Regardless of the fact that the same crash would have been so much different (i.e. dangerous) on the road, I wonder how long it would have taken to put me in an ambulance.

Mate! Glad to hear your getting better.

Im having serious de ja vou here! Exactly the same problems with mine. A few useful contacts for parts that should be cheaper for your.

Sorted me Suzuki genuine Rear Brake lever, peg and bar end. Good prices and a discout if your a site member of www.mcnninjas.co.uk But if your mention me, Richard, he may remember me as he’s a Ninja member. You can but try…ask for prices and he’ll email you back. He’s a good bloke.

Sudden Impact. Ask for Russ. www.sudden-impactuk.co.uk say that Richard with a Yellow Gixer with yello wheels recommended him. It should ring a bell. And they should do a good price.