I’m looking to get something a bit sportier than the GS (which has been incredible and even on the ride home impressed) but still capable of big miles for touring for next season, so I took a couple of test-rides with InMoto on a couple of 2016 models. Both bikes are being updated for 2017, both with better electronic packages and some other tweaks, but nothing major, so taking the current models out should still give most of the impression.

My favourite before riding it was the Tuono, as I’ve owned an RSV4 before, and really loved that bike. I kinda regretted letting it go. First impressions were “meh”, but that turned out to be down to half-inflated tyres! Quick top up and a back out to some country roads and wow, it was a real shock to be back on something hard and low-slung. After ten miles or so it became apparent that whilst it was an amazing bike, it wasn’t quite for me. It was just too focused a sports bike for what I need in a bike, and that’s a great road bike that can do big miles, and still put a smile on my face. My wrist alone thanked me when I got off on the end. The clutch pull is super heavy. No fun in city traffic.

This was a little confusing to me, as I was expecting a bike that was more road than race. You get race with the RSV4, so do you really need such a firm ride, long first gear and heavy clutch on a road bike? I think they’re too similar, the Tuono and RSV4.

Back to the shop, swap over to the KTM Superduke R, which I was expecting to be totally compromised, i.e. only able to do nutter mode and wow, what a surprise, it was sublime from the get-go. Smooth, slightly slow steering (put this down to tyre pressures, despite having 2.4/2.5 bar in), much better seating position, being higher making me able to see through traffic far better than the Aprilia, and much more like my GS, in fact, it felt taller than the GS! Instant ability to thread through traffic. It felt like I’d owned the bike for years, we gelled instantly.

Switch up to Sport mode, and wow, it pulls like a train! Bit more confidence gained through some twisties and instantly I knew this was the bike for me. It can bimble around town with it’s smooth as silk power delivery, any gear overtake ability and super visibility down road. Open it up when the roads open up and the steering improves massively, it just wants to get you in the corner and gives much more feedback over bad roads, whether it’s from bumps or crap on the road, which inspires a ton of confidence.

Sound wise, you can’t be the Tuono’s V4 when it’s on song, but for 80% of the time when you’re a slower speeds, the KTM sounds downright naughty. It grunts, pops, bangs, roars and purrs. They call it the beast, but to me, it felt more like a Lion. It can roar and it can slink along without gaining undue attention when you need it to. When you’re gassing the KTM, there’s not much attention available to admire the sound as you’re too busy going “OMFGGGGGGGGGG” and trying to keep the front wheel down or not slide the back out. It’s bonkers. I like it

I didn’t want to take the Superduke back, it was that good. I’m happy to buy one as soon as the new model comes out, but I’m going to test-ride the new Superduke GT in a couple of weeks to see how the electronic suspension and bigger fuel tank improve things for distance riding.

Big thanks to http://www.inmoto.com for the rides. 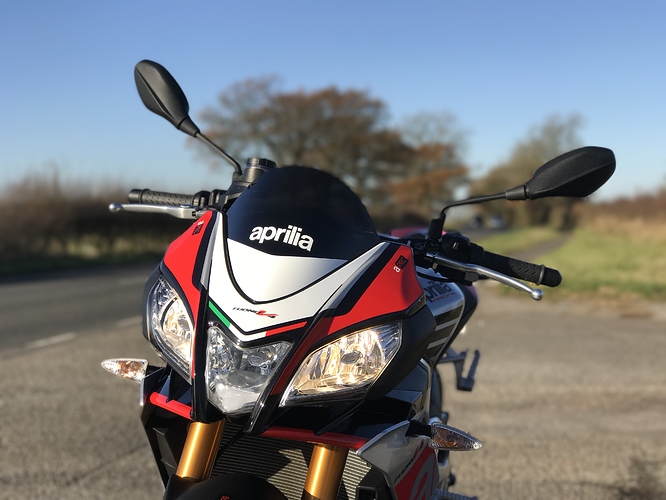 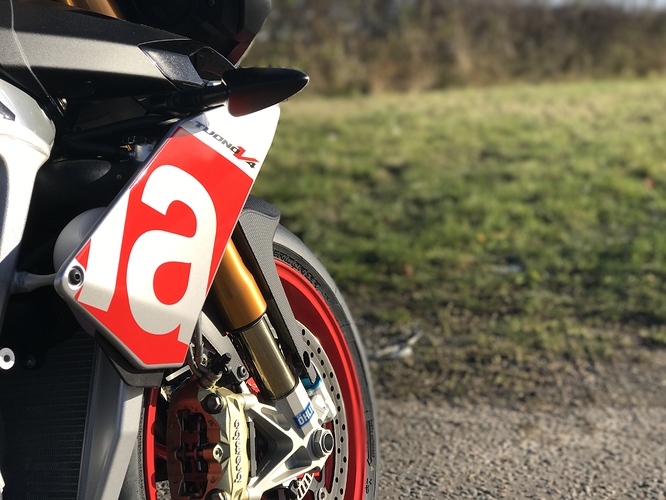 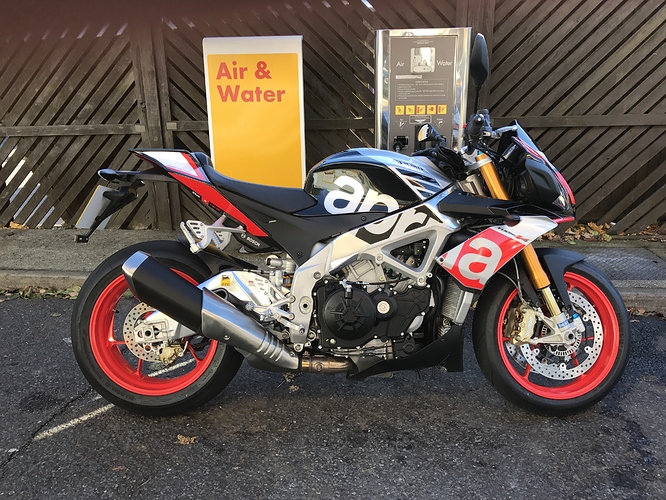 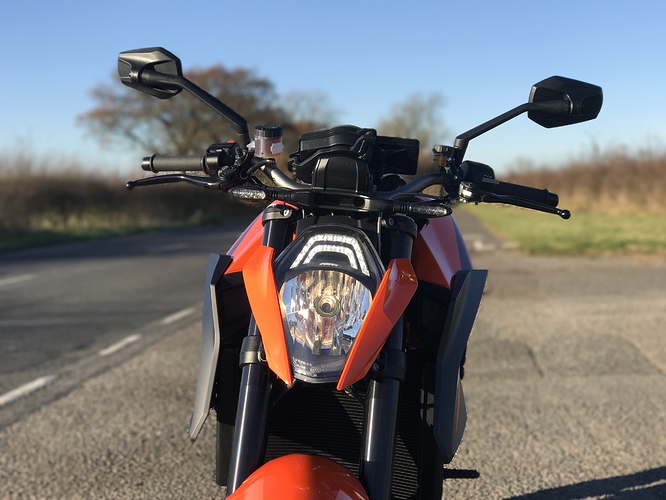 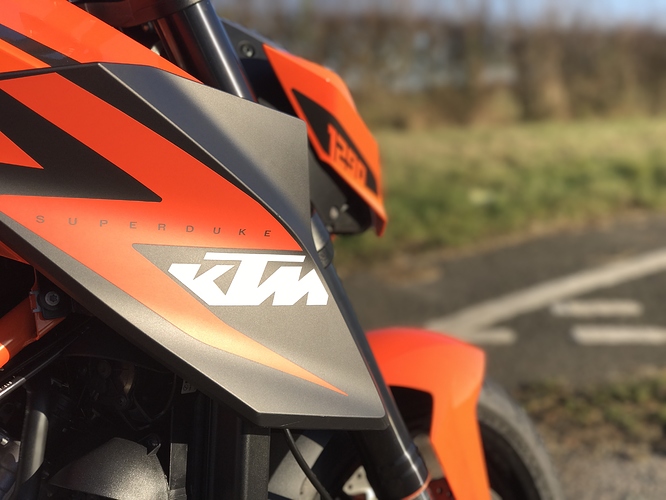 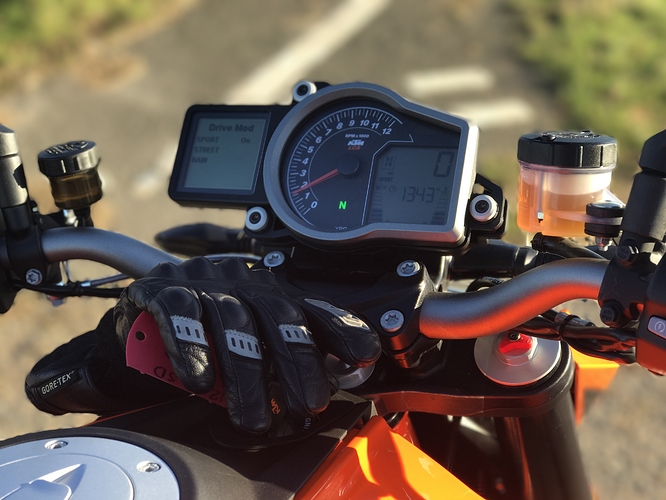 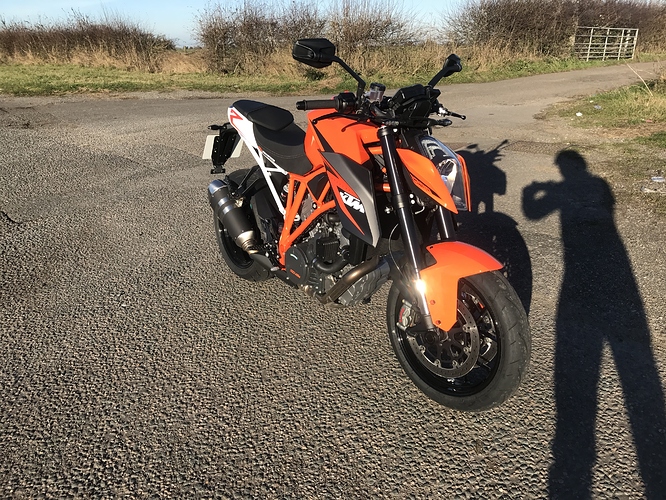 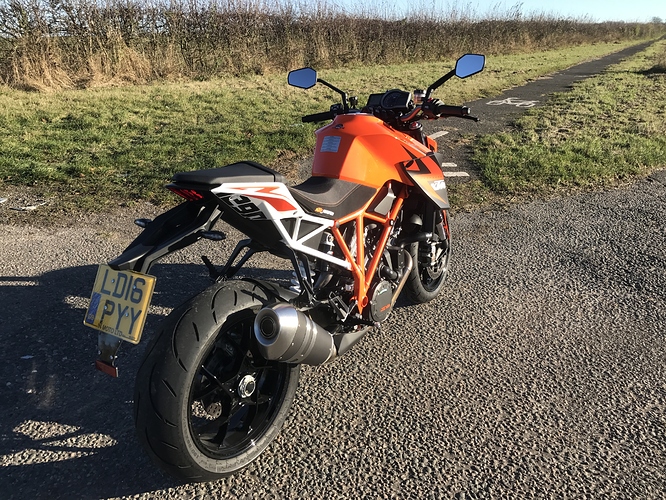 Nice post jay, you seemed to have had the best day of the last two months for a test ride!

Looks wise though, the aprillia wins hand down in my view. I know I’ll regret it in 3-4 years, but I can’t get over how ugly the headlight of the SD is. I said the same thing about the 990 adventure and ended up owning one!

Exactly my feelings after riding SDR, great do-it-all bike. At one point I got stuck behind police car and we went together in to town and in 30 was unbelievably smooth for the torque it has. Once on opened road the power never ends. It will sound much better with Akrapovic EVO system.

Benefits of being self-employed, I looked outside, saw the sun, and thought, yup, bike time!

motodrb, yep, total shock, the Aprilia is nowhere near as smooth low down, despite having a much better balanced engine up top. I’d be happy to ride in town on the SDR any time.

Serrisan, I thought the fact there is NOTHING on the front of the SDR, especially when you look down would bother me, but you know what; when you’re riding it, you don’t care, and all I wanted to do was continue to ride it! I’d get a touring screen for it though, just to reduce fatigue on long rides. And on that note, I see nothing stopping it being a brilliant tourer as well! Very smooth engine, great upright position, nice and high, easy on the shoulders and mental torque for when carrying side bags

The Superduke GT might be a little better with the electronic suspension. I wish all bikes had it, I love using it on the GS. I have it in comfort when doing distance riding, normal in town and sport when, well, being a bit of a dick. That’s why the Aprilia was out, it was just too hard. Great for track riding, crap for road and distance riding. The SDR was in a real nice sweet-spot of being soft enough for our crappy roads, but compliant enough to get feedback telling you to go for it, and I suspect you could tune the suspension nicely for the track if you wanted.

The difference is the amount of difference between the various options.

I mostly left the KTM’s in ‘Street’ mode (medium) and kept it there, because changing it didn’t make much of a difference.
I use the BMW’s suspension setting much more because it makes more of a tangible effect to the ride, depending what you are doing.

@me_groovy, wow, that’s a good discount! The all-black one looks good to me. I don’t like the look of the SE. Too bling. I’d rather add the mods I want myself.

I’m unsure at this point what model is right for me. The one I rode is amazing. I could have that, but the new model coming out comes with better electronics and more power, plus better looks (IMO), but also comes with firmer suspension and a change to the bar position to make it sportier. That’s not actually what I’m looking for, I want a great road bike with some softness to the suspension and a position I can ride in all day. That said, the changes might be trivial and make no difference to my impression, so I need to test ride it. Then there’s the GT which isn’t getting updated but I can test-ride in a couple of weeks. I’ll have to be patient and wait until I can test-ride them all and hope the deals are still on if I need them.

@hogtrumpet oh, that’s a shame. Yes, the BMW electronic suspension is awesome. I use it a lot. So it sounds like the adjustment range is far narrower with KTM, than BMW. Hmm, well, perhaps (hoping?) it’s improved with the GT. No harm in trying it out.

One day all bikes will come with electronic suspension. Shame that day isn’t today. Having BMW-quality adjustment on something like the superduke would be awesome.