Contour - Roam vs GPS vs HD

Want to buy a camera both for the bike and for Skiing. I prefer the looks of the Conour family to the GoPro family.

Of course the Contour Plus does all of these, but that’s £350 which is out of my league.

I’m also thinking about a helmet cam for the bike and boarding/skiing.

I’m under the impression that 60fps is required for slowmo’s, which could be useful for the footage on the slopes.

I’d also like to take it diving, so I’ll need the waterproof case on all these models.

The viewfinder would be nice, but I’m pretty sure its not compatible with my Windows phone.

I’m also considering the GoPro, but mounting to the bike rather than the helmet…

Its a tricky call, so I’ll be interested to see any comments from owners.

Sorry to get your hopes up, but I can’t find it on eBay anymore

Keep an eye out though. The seller was ‘Pentagon GPS’.

The drift looks good to me too. I’ve had a Contour GPS for about a year and the mic is rubbish, and you cannot connect an external mic. At low speeds it’s not a great mic and above 20mph you just get wind noise. If you’re not interested in audio then it’s not a bad camera - I do think the video quality of the go pro looks nicer though.

Have you tried sticking a bit of foam tape over the mic hole? This should deflect the wind noise while still picking up louder sounds (think engine noise!)

OK, I don’t get the Drift family of cameras. What’s the difference between the Drift Stealth 170HD and the plain old Drift HD? They seem pretty similar specs, if anything the non-stealth is smaller, and costs a bit more?

It’s all too confusing!

Szymon, can you just tell me what you buy, where you bought it, and I’ll do the same!

Hehehe yeah it is. Here is a list from driftcam.com of the extras on the newer Drift HD (it’s an update for the Stealth):New compact design – 25% smaller and lighter than previous models (4.1 inches long and 4.23 oz)Replaceable lens cover – in case of drops and breakages, it’s easy to replaceCan take 9MP still photographs – unique to Drift HDNew goggle strap design (for less movement)Screw-on back panel – interchangeable for better water resistanceExternal mic jack – internal mic is also still thereHDMI output for direct TV viewing on HDTVIn terms of size, it’s now almost identical dimensions to the Contour Roam. The newer HD is £210 on amazon, the Stealth is £180 on amazon.

Well, amazon screwed me. I had the Drift HD in my basket at £210, got to the very end of the process and was just about to click “pay” when I noticed that the price had gone up to £252.47! That’s too close to Contour Plus prices for me to pay. mutter

I think the newer Drift HD has it for me. It’s a bit more than I was planning on spending, but I’d rather buy right and buy once and it appears to tick a lot of my boxes. Not sure I’ll be going ahead right now but i’d like to have it before the trip to Meribel at the end of this month. I’ll let you know where I find it cheapest.

Yes, but Amazon’s own price was £210! Delivered! Now I’m angry and upset at them and looking elsewhere

Actually I’m now still dithering…damn, this or the Roam at £70 less (the roam can be firmware downgraded to get 60fps)…

So the things the roam doesn’t have compared to the drift HD is the screen and external mic jack?

Where have you got the best price for the roam?

So the things the roam doesn’t have compared to the drift HD is the screen and external mic jack?

Where have you got the best price for the roam?

Also Amazon - £149.99 delivered is the best price there (at the moment, it might change in seconds!!)

In the end, based on this awesome review:

I bought the Drift HD Action Camera from Amazon for £209: 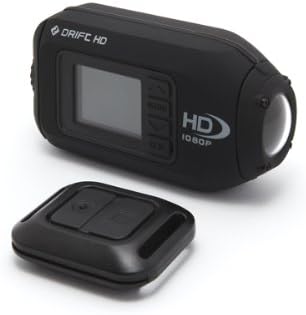 From parsing all of the information out there, I think this is about the best available at this time for around this price