here are a few pics of an R1 in chrome

i was told it belong’s to a rider in eastern europe?. 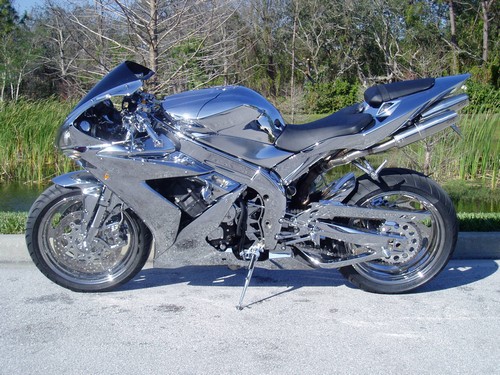 Definately not something you’d see in the UK

No tnx. That must be blind other road users on a sunny day.

I’m not into chrome on cars on bikes but I have to admit - This looks AWESOME!!!

not sure about eastern europe, think i seen that on a USA stunt DVD.

still a trick bike, love to stunt that for a day

I would go mad keeping it clean! How much would all that chrome cost ???

Have seen it before and i am sure it belonged to a Russian. Must be a mare to keep clean but it still looks funky.

Hmmm as a bike personally I think its horrible. Not into chrome myself.

But, as a work of art or as something a bit different then its feckin superb. The man hours and effort gone into that ahve to be appreciated, even if it is complete insanity

Yea I’ve seen this before, someone told me that the fairings were all chrome painted and are not actually ‘Chrome’ itself. As Snap says must be a real nightmare for other road users on a sunny day… Each to their own…