Good ride with everyone from The Ace Cafe to Chelsea Bridge, until we found out Adam H had a bit of a coming together with a stationary vehicle. No harm to either party, some broken plastic and dented metal, I’m sure Adam will explain it in more detail if he sees fit… Bad luck fella.

Then a good ride from Chelsea Bridge to Soho, which was packed, mainly due to some inconsiderate car-drivers using up a lot of the lower end of Frith Street, forcing bikers to park round the corner. When a space became available in Frith St, Smiled did what anyone would do and paddled his bike around the corner, to a space next to me which was JUST inside Frith St (one-way remember), when some up-his-own-arse officer (this is no reflection on the service, but this guy and his female cohort were complete tossers, the opposite of what a friendly bobby should be) decided to collar Smiled and tell him to come back round the corner, where he proceeded to give him a ticket for going up the wrong way of the road!!!

Obviously this got a lot of attention and the cops were surrounded by bikers protesting at the complete unfairness of it and the harshness of the way they went about it. I have no idea what sort of training this copper got, but he didn’t go to the place where normal cops get taught how to be nice and get results from people by talking to them, not just getting your notebook out and writing out the strongest ticket you can for absolutely no bloody reason!

I am livid about this!! Smiled is the nicest guy you can meet down Soho, so why does he deserve to be treated like some serial offender?? Well, there’s talk of a court appearance, I don’t know what that’s about, but with CCTV footage showing his engine wasn’t engaged, he at no time used the power of his bike to move, instead paddling his bike all of about 15-20ft max, it’ll get thrown out, and then there’s all the witnesses who saw it and the completely unecessary heavy-handed approach.

Then I got an ear-full by his collegue who seemed to have some serious attitude problem, despite them being addressed in a civil and polite manner. These two came straight out of the university for rude buggers.

I’m sorry if this offends, but it REALLY wound me up. No wonder they lose respect when they run around like Gestapo members and think that just ticketing people somehow gets results and respect. Argh! This annoys me more because we clearly know a number of very nice people who work in the force who have the balance of civility and appropriate response. It is bad for them as these idiots actions and attitudes can only reflect on the good work theyr’e doing. It makes my blood boil to think we’re heading straight on to be a nanny state where the human element is lost in justice & order.

Smiled, I’m gutted for you, you of all people don’t deserve to be treated like a piece of dirt!

well i’m home now!!! dunno what you mean about my bike??

ive stripped it down already and will give it run about naked tomorrow but the forks and controls where fine on the way back!! just some pennies to spend now on duct tape/super glue and a tin of yellow paint!

yeah, that copper really brought down the mood tonight, dunno what they were playing at…still it sounds like it might be OK - fingers crossed for you Smiled!

nice run home though - sometimes I’m glad I live so far away!!

at least you can get those stickers straight now adam!!!

but glad to hear your ok.

sounds bad what happened to smiled, but if your going to report him make sure you have got his number down correctly, as a mate in the police told me that a common trick is to jumble up the numbers on there shoulders,so that they read incorrectly, i.e the number on the shirt and the met vest might just be one digit out.

Did anyone get his and her number? Is it worth a number of complaint letters to his guv’ners? He’s clearly anti bike so he won’t change, however if enough complaints are received then there’s a chance he’ll get a clip round the ear from on high.

Angry for you Smiled - Jay is right, of all the people they could’ve picked on you are probably the most easy going and placid of the all of us.

Gooooooooooo !!! Jay …and what about those of us that get wrongfully arrested, held for five hours, released without charge and then find the Police havent secured your bike and it has been nicked at the same time you have !!!

the woman copper only had one number on her shoulders? when i asked the two in the van they said there is supposed to be three but the others might have fallen off??? two numbers off each shoulder??? i think not??? she was a knob aswell?

Maybe the number on their shoulders is actually their IQ figure, that’d explain it…

Damn, that’s under-hand Adam. I thought they were meant to be accountable nowadays, clearly not so. Well, I didn’t have time to get my camera out (had packed it away for the night) but i believe others got snaps.

How funny was that episode, seeing Jay arguing with that lesbian was funny as feck!

There was no actual ticket issued, maybe a trainee out to prove a point, I really don’t think you will get a summons Shane as you never actually signed a ticket to accept the offence.

Shane was in no way deserved of that episode, ride on cowboy 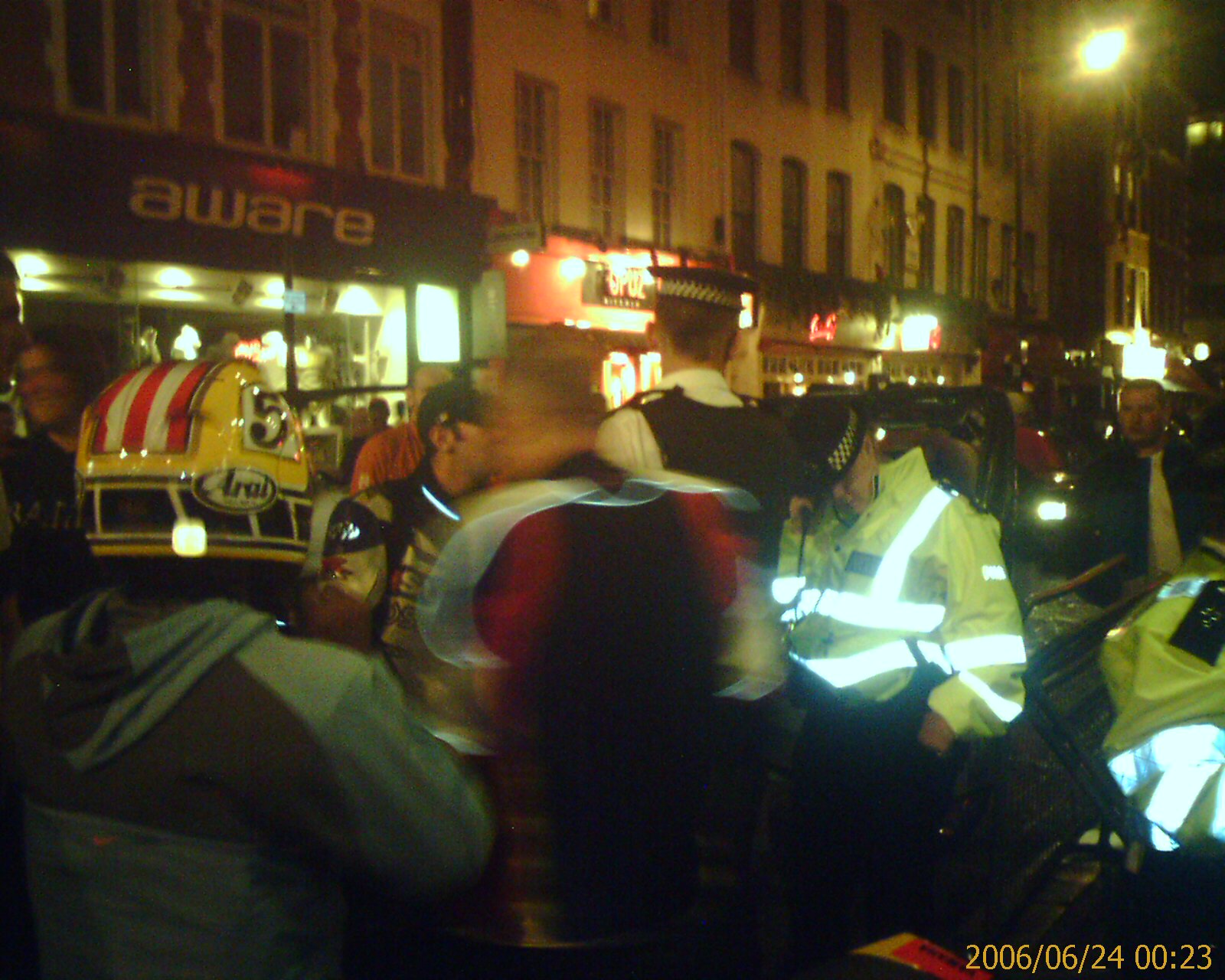 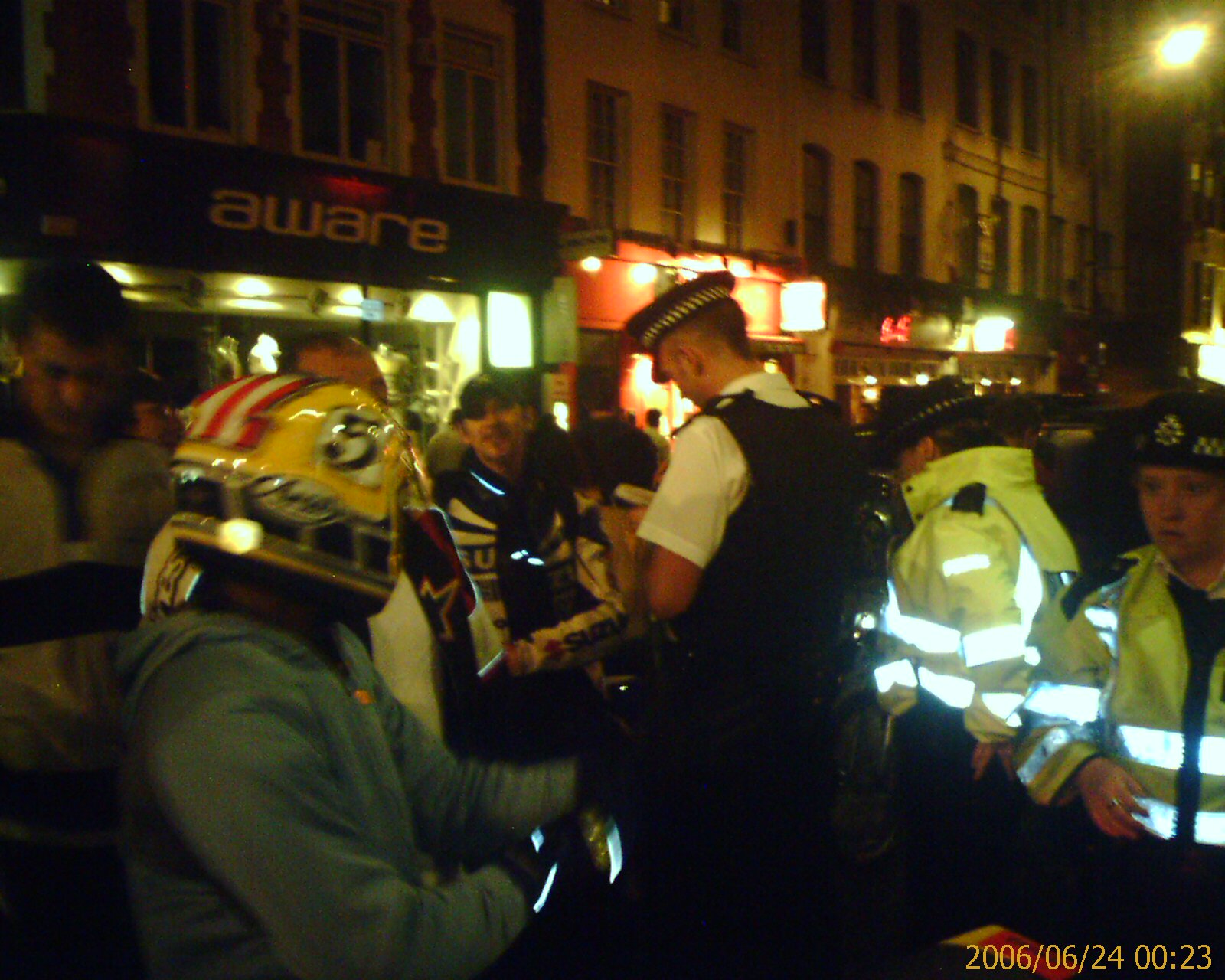 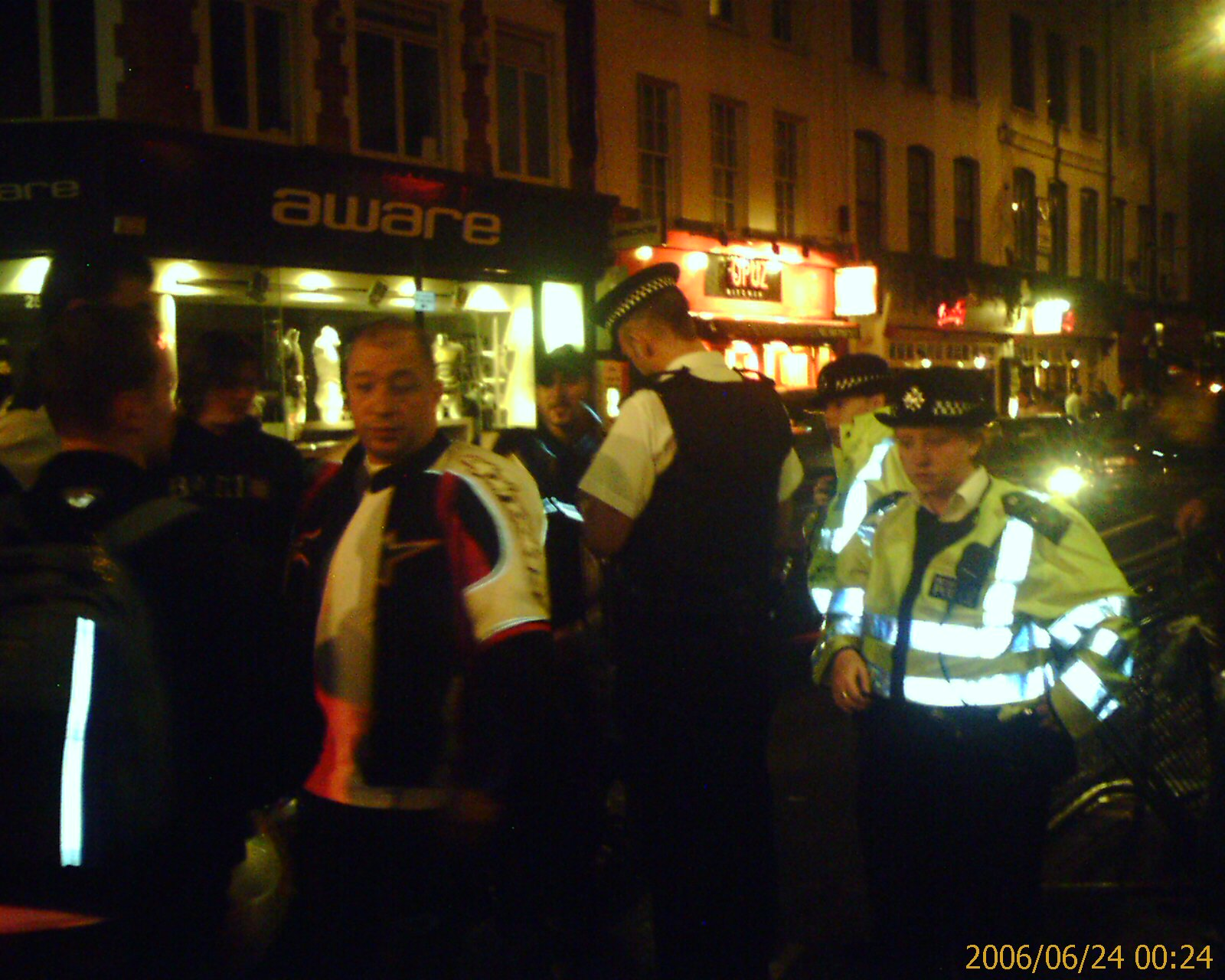 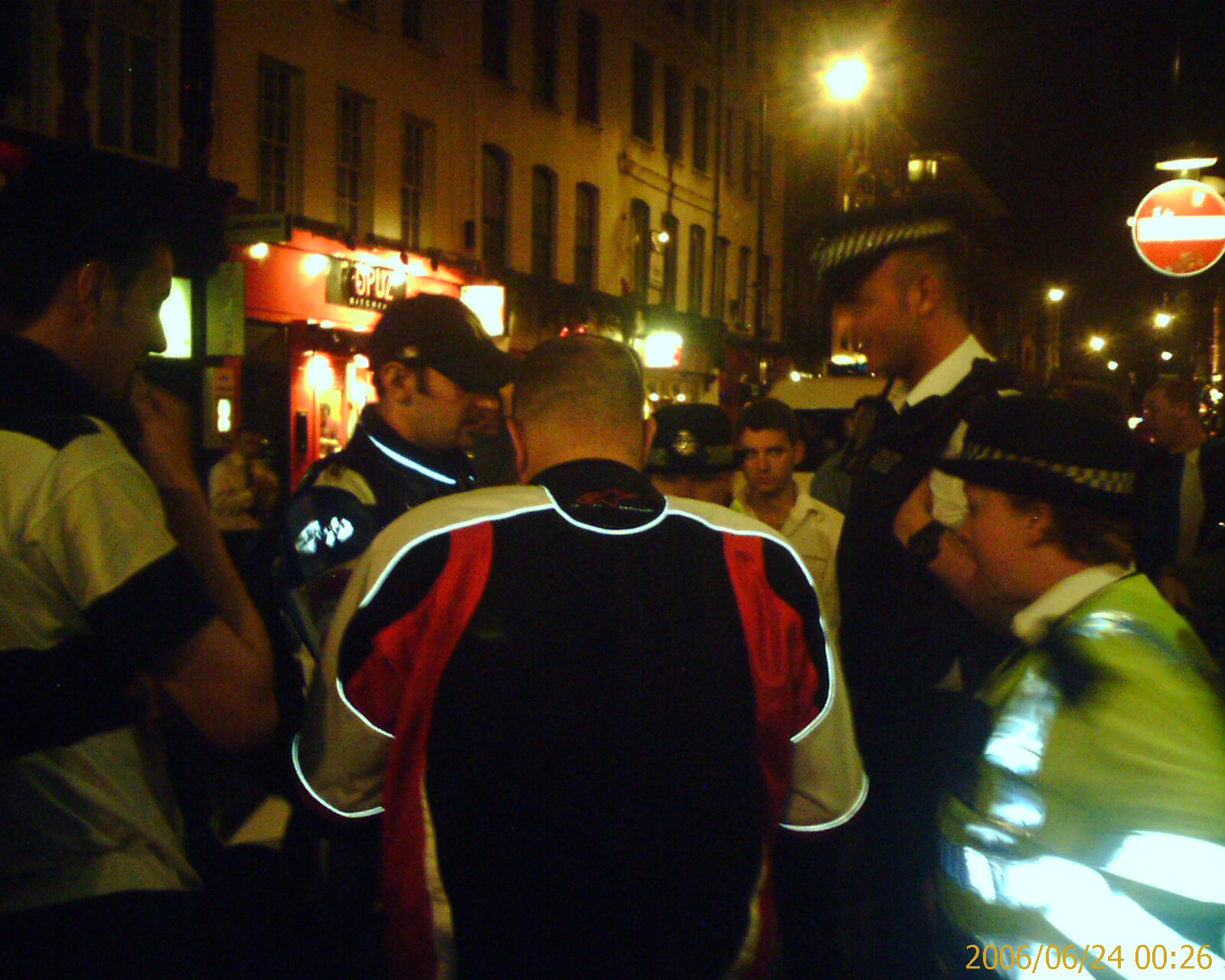 If nothing is heard in next 2 weeks you are free and clear.

smiled: i was leaving and you were going into my parking spot next to jay, i know your bike was not on when you passed right next to me and you were paddling.

Try 6 months to lay the information.

cheeky fucker is laughing in one of the pics and all. dont worry mate there not all like that.

The said PC sounds like a risk to the public … he doesn’t sound like he can control his emotions. I think people should be demanding psyche-evalution reports before some gets hurt.

Point of Order: Does that mean that said alleged Police Woman Constable was improperly dressed and therefore not displaying the necessary Identification legally necessary to identify her as one of the government’s covert tax collectors??

Does that in fact mean … said WPC could be subjected to a legal formal (permanent blot on he file) complaint of improper dress and subsequent misconduct. Complainant offering to remove said complaint should the over-zealous, provocative prosecution be reduced to a more suitable caution … after all its not as if people were wearing table clothes over their faces and shouting Death to everyone … was it?

… Hmmm (scratches chin) Don’t suppose even said points-scoring, career-climbing, over-excitable (read forthcoming emotional pysch-evalution failure) would have crossed, or been allowed to cross that line … if people had!

An informal complaint to the Chief Constable voicing concern over the screaming emotional tyraid which is totally unprofessional for one of his officers and suggests physcological help may be urgently needed for this officer… sounds appropriate.

god i hope i see this ass in soho on friday…

Just chatted to Smiled and he told me about this, I missed it completely.

Ok, first things first, I’m not at all hot with traffic offences so I really don’t know what smiled could be reported for for walking his bike (though sitting on it) a yard or so into a street to park it. Pork Scratchin or Darrylj would be the gents to speak too about it - may be worth sending them a pm and letting them have a look at the thread.

Sorry mate, I should have asked, did you paddle it backwards or forwards ? No matter really but I’m just curious.

As for the coppers getting uppity and stroppy. Well the only thing that you can do to beat that is to react calmly and politely to whatever they say and make sure that you have (which you did thankfully) several witnesses round you.

As a serving copper for a long time … look at my fecking grey hairs if you don’t believe me !! … there is just no way that a reasonable member of the public should be spoken to or dealt with in that manner at all.

I would suggest you complain about it smiled, but of course, that would be down to you and at times it could make things worse ?!?! Could be right handy if Wiggetta sent you those pics by e-mail to keep handy as well.

If anyone sees this chap again in or around Frith when we’re there then the best bet would be too ignore him unless he speaks to you first, then if he does (being polite about it) make sure you have at least one other present to be a witness for you. Or even better if I’m there, call me over without letting him know what I do and I’ll go as a witness for you.

I’m sure the six month thing is right but that will be down to our very friendly resident Traff Pol boys to confirm.

Wasn’t a bearded chappie was it?

My wife and I used to enjoy an ‘after midnight’ coffee at Bar Italia- the waitresses would come out and serve you on bike! The CBR600 crowd would park opposite at Caffe Nero or whatever its called.

The last time we tried it, however, a large bearded gentleman of the law moved us on. “You can park in Soho Square” quoth he. When I gently pointed out that all the bike bays are always full of ****ing cars, he elucidated “it’s a concession, not a right”. Whuh?

I couldn’t believe it- I was a teenage tearaway again, being ticked off by a vintictive village bill (no offence 579er) in 1970s Norfolk. Oo arr officer, be that yur zister or yur woife?