Chaos A.D., Tanks on the street

Well, not really, but close enough

Apparently my fave club acquired one of these, so went out for a ride in the City tonight

Some other club punter caught it on camera

Yeah I saw that on Millbank, it was waiting at the traffic lights at the junction with Vauxhall Bridge. Took me right back to my childhood - I had a toy Action Man Scorpion tank

Everyone else seemed to be ignoring it, which made it even funnier. Seemed to be advertising online vouchers, with a slogan that mentioned RBS bonuses.

Great to see it. Didn’t have my helmet cam set up, unfortunately, so no vids/pics of it.

Would love to have had a ride in it

I think it was a Scimitar rather than a Scorpion. Both practically the same, just that one’s got a bigger gun.

Saw a tank on my way up to Daniel’s today. Gave the old girl a few blips around them.

Same tank, I think! Didn’t see the slogan though.

Got fucking distracted and missed my turning. F*cking lost for hours.

Would love to have had a ride in it

I think it was a Scimitar rather than a Scorpion. Both practically the same, just that one’s got a bigger gun.

I don’t think it is either.

A Scorpion has a short 76mm gun 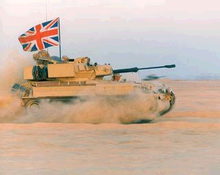 A Scimitar has a 30mm high velocity high rate of fire cannon for vehicle busting.

Think its the Abbot 155 self propelled gun:cool:

I had worked out it was a 105 as well, but spent ages struggling to track down a 105 on an a CVT chassis when it was FV430 chassis all along!

I knew I should of done the tank recognition course when it was offered to me!!!

Apparently Ross Noble owns one so perhaps he was taking it to the Ace in preparation for Saturday’s ride to Excel.

If he’s planning to ride there in that, he should arrive at Excel on Monday :hehe: Parking shouldn’t be a problem though.

Tanks a lot for all the useful info guys…T