Spent the day trying to remove the rear monoshock from a Honda CBF500. The lower bolt is being a right pain. Nut came off ok, but I canna slide the bolt out. Seems the bolt, collar, bearing and shock have all seized together, as when I move the shock the lot moves together. I’ve covered it in WD40 and penetrating spray, hammered the bolt through loads (with nut on end of it), rounded the bolt head trying to wrench it and even gone at it with blow torch (carefully).

Anyone got any ideas?
I’m kinda thinking I’ll have to resort to removing the back wheel and trying to squeeze a hack saw in there to cut the bolt.

Diagrams of the setup:-
https://www.fowlersparts.co.uk/parts/4798384/cbf5006-2006-e/rear-cushion
https://www.fowlersparts.co.uk/parts/4798383/cbf5006-2006-e/swingarm
Bolt just goes through bracket directly on top of swing arm, no lower linkages here to remove with shock. And access to the bolt head it hindered by the chain guard mount.

Oh and the other problem with just taking the bike somewhere like OMC or Scorch, is I’m planning to remove the shock for a week so it can be refurbished (assuming the shock isn’t too far gone whence removed).

wow that chain guard bracket is a pain!

it’s likely all seized up, if it was me, I’d write it off, destroy it by whatever means and buy a new bolt assembly

Tell me about it. Planning to swap a shorter lowering link onto end of shock anyway, so wouldn’t be end of world if that end of shock was trashed. But obviously I don’t want to damage the mount on the swing arm - bit more money and hassle to replace…

Have another go tomorrow if today was your first attempt. Maybe some of the penetrating spray will have eased it a little bit. It looks pretty awkward, I don’t envy your task.
Is there any way you can drill it out maybe?

How about lots a gentle tapping with a piece of wood? The vibrations may allow the WD40 to seep in and loosen it enough. Maybe even leave a speaker on it playing music, sonic vibrations, may help whilst you’re doing other things.

Vinegar if alloys and streel are involved…has to be re applied and left and repeat whilst trying to move it every do often this can break the chemical bond !.. or try risky one of pocket gas flame torch localised heat .

Place a metal drift on the end of the bolt, the idea of the drift is to direct the shock waves from the hammering in the right direction. Hammer away, it doesn’t have to be almighty blows just keep working at it…

wd40 isnt as good as something like plus gas.

Tried the ‘gentle’ tapping and also tried the not so gentle tapping with the nut on the end of the exposed bolt, socket on it with extension bar and hit many, many time with a huge lump hammer whilst a friend braced the bike to stop it toppling over.

Also tried the blow torch, with some strategically placed ceramic tiles around the area to stop other stuff melting/burning. And then repeated the above.

I drenched it with even more penetrating fluid yesterday, going to try some vinegar on it today, then give it a day or two, see if it works its way in.

Drilling it going to be very tricky due to location and length of bolt. No chance from chain side, possibly the brake side at a push, but doubt I’ll be able to drill square on to go right through neatly.

Could you get a nut splitter on it? 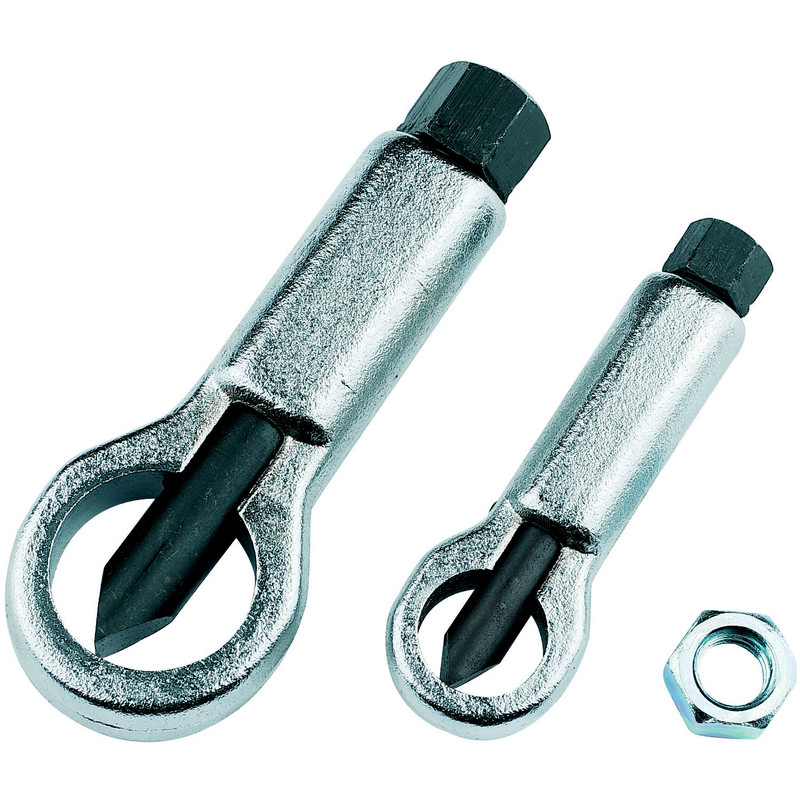 The nut is off, it’s the bolt that ‘should’ just slide out through the collar and bearing that’s stuck solid.

TimR: Tried that. Removed left hand side peg bracket and chain guard. Managed to sneak a long sprocket extension bar in under the chain. With a nice long lever bar to wiggle it, my hex sprocket just rounded the bolt head.

The bolt is well and truly seized to the shock, as I wiggled the bolt, it rotated the whole shock forward and backwards! The bolt, collar, bearings and shock as seriously seized together. Seems all rotation on the lower shock joint has been through the bolt in the swing arm frame! Guess this is what happens when a bike does 40K with no rear hugger - or perhaps a previous owner has been fond of pressure washers…

Mole: Yes, I will remove this Excalibur of a bolt and live up to my namesake!

Leave the nut and go for a ride, the rest will soon free itself…

do a stoppie and slam the rear end down

I’ve a CBF500 too, a 2004 one. Replaced the rear shock earlier this year. Bottom bolt was a bit of a bugger, but using a breaker bar and a bit of Plusgas did the job. Also tapped it out from the “nut” side with a small lump hammer. Be careful not to damage the mountings though…

Tried the ‘gentle’ tapping and also tried the not so gentle tapping with the nut on the end of the exposed bolt, socket on it with extension bar and hit many, many time with a huge lump hammer whilst a friend braced the bike to stop it toppling over.

Too much, you want a drift directly on to the end of a bolt. Don’t mess with nuts and sockets you’re going to sac the bolt anyway. If You haven’t got a drift use a 250 mm 1/2 square drive extension. You need to send shock waves directly down the length of the bolt. This is achieved by lining the drift up with the bolt - hammer, drift, bolt, tap, tap, bang, bang, wallop and out it will come. WARNING, if its as tight set as you say it’ll probably fly out like a bolt from a crossbow be careful where you aim it!