Bonkers crash, this photo caught my eye recently. You can see Marco Melandri being dragged along by a Repsol with his arm stuck in the bike the wrong way. He was lucky to get away with a dislocated shoulder! 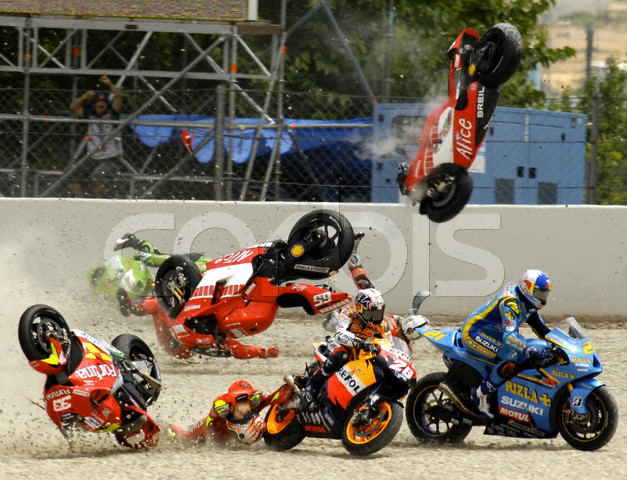 wow, crazy pic! like some sort of apocalyptic vision!!

Sheez. Very lucky to have got away with it

Look at the bloke in the background under the scaffolding…New Pants Please !!!..

maybe his dancing made them crash and that dude off the other bike was just checking the chicken strips of the Repsol?

It was kinda weird watching this crash…Hopper went at full speed in a straight line into the barriers and i swear Sete’s bike was cartwheeling thru the air at least 4 stories high…if it had wings it would be cruising like a jetliner.

But look at the angle of his head, bloody hell!! His neck muscles must be knackered.

he was unconcious i believe

Yes, he was Trix… That was one crazy crash…